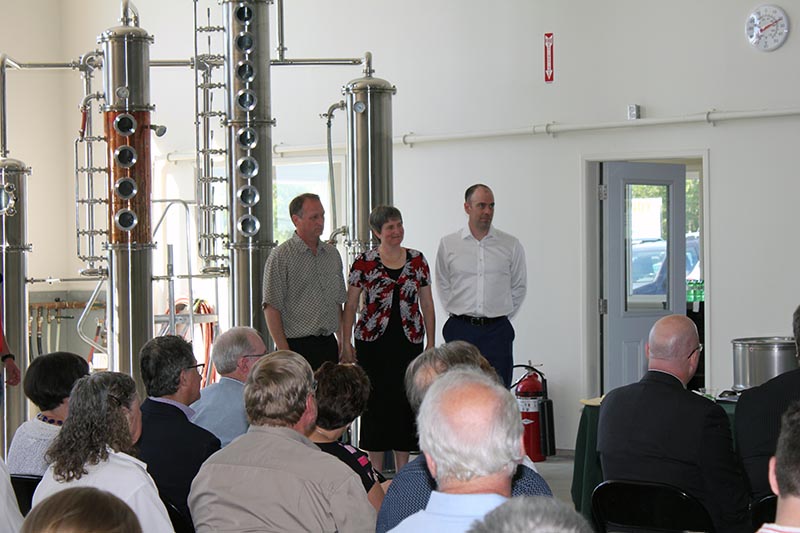 Owners Rob Heuvel, Laura Bradley and Joey Kelly are seen here inside King’s Lock Craft Distillery. Kelly has roots in the Vankleek Hill area and contacted The Review to invite local residents to a “Family and Friends Day” taking place at the distillery in Johnstown, Ontario on Saturday, September 10 from 11 a.m. to 4 p.m. You can find out more about the distillery at www.kingslockcraftdistillery.com or find the distillery on Facebook.

A new craft distillery in Johnstown, Ontario near Prescott officially opened its doors to the public on August 25.
The small-batch craft distillery produces organic spirits and sources all of the grains it uses locally.
And one of three of the King’s Lock Craft Distillery owners has roots right here in Vankleek Hill. Co-owner Joey Kelly, who owns the distillery with partners Rob Heuvel and Laura Bradley, contacted The Review last week to let us know about the new venture, which has been in the works for the past few years.
With its sights set on distilling small batches of vodka rye, rum and gin, the King’s Lock Craft Distillery currently has its own brand of vodka and Prescott White Rye for sale at its location.
Kelly says that the groundwork has been set for the distillery to eventually have its products for sale at Liquor Control Board of Ontario (LCBO) outlets, but that approval of its products by the LCBO takes place as a separate process from having products for sale in the LCBO retail stores.
While The Review was speaking with Kelly, he said approvals had come through from the LCBO for production of the distillery’s rum and gin products about an hour earlier. The company hopes to be able to sell its products to restaurants and hotels soon.

The distillery is located about two kilometres east of Prescott, in Johnstown, in part of a 6,000-quare-foot facility on County Road 2 at the corner of Newport Drive, which will also be home to the Windmill Brewery, set to open soon and one other business, Kelly said.

In addition to using local, organic grains, King’s Lock Craft Distillery has several environmental initiatives in place, including grain mash recycling for use in cattle feed, fertilizer and more, installation of energy-efficient LED lighting, a water reclamation process and choosing both green electricity and green natural gas with Bullfrog Power.
Kelly said he contacted The Review because he wanted to reach out and invite people to a “Family and Friends Day” being held at the distillery on Saturday, September 10 from 11 a.m. to 4 p.m.
You can find out more about King’s Lock Craft Distillery on Facebook or at: http://www.kingslockcraftdistillery.com

King’s Lock was named in honour of the river rapids and large lock system that started near Johnstown (Lock 27 and 28 west of Cardinal), enabling early travel along the St. Lawrence River. The King’s Locks contributed to the settlement of Upper Canada. All of King’s Lock Craft Distillery’s spirits have been named for a tale of the St. Lawrence, sharing the country’s past with its customers.