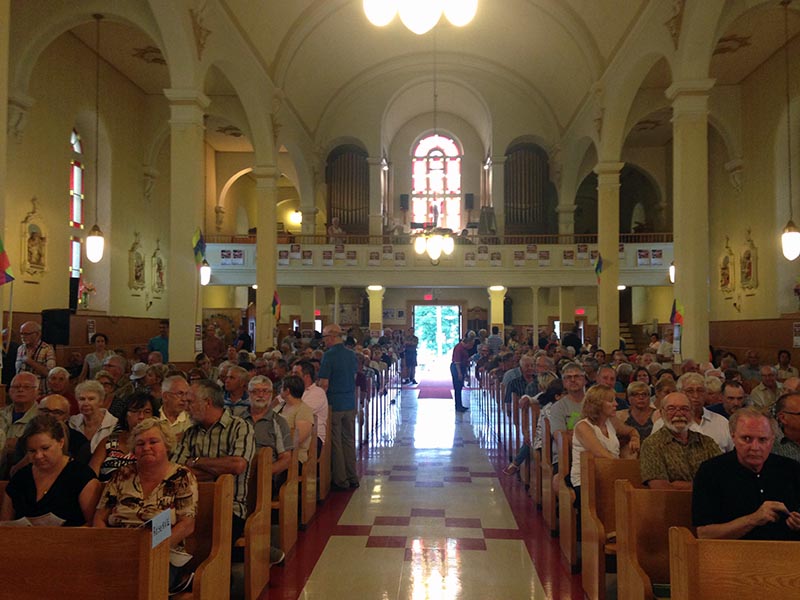 The crowd at Action Champlain’s latest meeting, held on August 24 in L’Orignal.

Everyone who attended Action Champlain’s latest meeting was handed a face mask at the entrance, an allusion to the small particles of dust the group says would be emitted by the cement plant Colacem Canada wants to build in L’Orignal.

The rest of the meeting continued along those lines, with spokespeople arguing that despite environmental regulations, a new cement plant would harm the community with pollution.

Charles Despins and André Chabot, spent about an hour on Wednesday making an emotional appeal for support from Champlain Township residents. They said Action Champlain volunteers have knocked on 9,000 doors in the area. The meeting was held at St-Jean Baptiste Church, and the pews were full.

The meeting felt at certain points like a rally, with Chabot leading chants and asking for applause from the crowd. He said 400 people is “fine for this meeting” but won’t cut it in the future. “You need to go home and you need to bring more people. At the next meeting we’re going to have, you need to bring your children, your aunt, your grandmother, everybody needs to show up,” he said. “Because the last time I talked with a councilor, he said even if you show up with 500 people, what about the other 8,000 people?”

While members of Champlain Township council were present, Mayor Gary Barton was not, because of a family commitment, according to the Action Champlain spokespeople. Chabot and Despins said the crucial next step for the group will be having a presence at Champlain Township when a public meeting about Colacem’s zoning change request is held, likely in October.

A volunteer offers a guest a brochure and a face mask at the beginning of Action Champlain’s latest meeting. (Theresa Ketterling photo)

Spokesperson Charles Despins argued the cement plant’s smokestack would be visible from far away and “brand” L’Orignal as a “smokestack community.” Chabot argued that the 125 jobs promised by the company aren’t guaranteed.

The group’s spokespeople said Action Champlain is prepared to bring the case to the Ontario Municipal Board, if necessary. The company will need a zoning change from Champlain Township, an official plan amendment from the United Counties council, and approval from the province before going ahead with its project in L’Orignal.

The company has submitted the required studies on noise, air quality, environmental protection and more. Its planning report found six homes within 300 meters of the proposed plant, within the recommended setback for “class III” industries, but says the company would limit  heavy industrial activities to the northern part of the property on Highway 17, further away from the homes.