Sponsored How will robotics make a difference for this family farm? 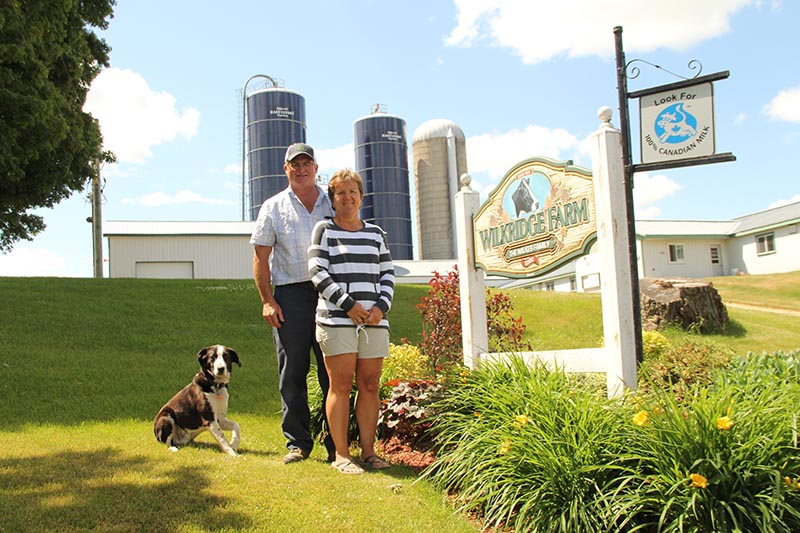 Ken and Peggy Wilkes, of Wilkridge Farm, in Fournier, say that they are too young to quit farming. Ken is 53 and his wife is a year younger. A lot of their friends have begun to retire, including a number of fellow farmers who have sold their milk quota. The Wilkes aren’t ready for that. Instead they have opted to invest nearly $2.3 million into the construction of a new, state-of-the-art dairy barn. This will enable them to expand operations and increase yields.

“We don’t want to see it die. We don’t want to sell our cows and call it quits. Someone around here will get a good dairy farm one day. It will either be someone in our family, or it will be the next person to buy the farm,” said Ken.

They say that the recent influx of diafiltered milk protein from the United States and trade agreement cut profits at Wilkridge Farm by around seven per cent. Ken Wilkes says the only way to make up the difference is to produce more milk.

“With our current barn, we don’t have the space to milk more cows. Unless we build, we can’t get more milk quota to grow,” said Ken.

They decided to go with A GEA Monobox automated milking system because it required the least amount of manpower and what they considered to be the best conditions for their cows. It will be the first of its kind to be installed in Eastern Ontario. An identical system was installed earlier this year at Tranquility Agriculture, in Brownsburg-Chatham, Quebec.

In the tie-stall system that they currently operate, the Wilkes spend a lot of time moving cattle. They move them between two barns and from pasture.  It can be hard and dangerous work to do on your own.

Peggy has a fulltime job working at Scotiabank, in Casselman.  She helps with morning chores and also cares for and feed the calves, before heading to her day job. She also manages all of the financials for the growing farm. The Wilkes three children are grown up and either pursuing careers or furthering their education in the city. Their daughter, Leigh-Ann, now lives in Saskatchewan, where she works as a canola breeder agronomist. Daughter, Hannah, works as a child protection worker in Durham and the Wilkes son, Andrew, is attending Carleton University, where he is studying engineering. The farm has two part-time employees, who help around the farm and come to milk when the Wilkes travel, but for the most part, it’s a one-man operation.

“I farmed with my dad, Orville, up until two years ago. He lived next door and he helped on the farm. Our relief-milker, Aurele Lamothe, has been here for the past 17 years. Without his help and the help of our new relief-helper, Sam Ryan Brunet, we couldn’t do what we do,” said Ken.

The new barn is intended to make things easier by putting all of the cattle under one roof and automating many of the chores. There will be no need to manually milk the cows. With the GEA Monobox system, two milking machines operate from one centralised location, with cows being milked on either side.  This reduces the amount of cleaning, by keeping the two robots confined to one, centralized area. The incentive-based system lures the cows in with food and controls how often each cow is milked. It also tracks a variety of statistics relating to yield.

The barn, which is being constructed and designed by Lawrence Dairy Supplies will measure 75 feet wide by 289 feet long. The freestall barn will have mattresses and shavings to keep the cows comfortable and a number of automated systems, including back scratchers and machines to push the silage.

“We love our cows, but they have to work for us. Every decision we make every day, centers around our cows and our farm. We are concerned if our cows are happy and if they are comfortable, because when we go to bed at night, we want to know that everything is okay,” said Ken.

The Wilkes plan to continue farming for at least the next ten years. When Ken turns 60, he says that he and Peggy will review where they are at and make some difficult decisions.

“Farming is fun. It’s exciting right now, with all of the new technology and we want to keep up,” said Ken.

When the Wilkes tell people about their plan, they say the reaction is usually the same.

“They all ask us, why? And then they ask when Andrew is coming home to work,” said Peggy.

Six generations of Wilkes men have worked the family farm. Ken and Peggy say that they would be proud to have the tradition continue, but they have no intention of pressuring any of their three children to sacrifice their careers to return to the farm.

“We feel strongly about giving Andrew the same choice the girls had. We’re building this new barn for us,” said Ken.

In 1992, Ken and Peggy purchased the 286-acre dairy farm from Ken’s parents, Orville and Marie Wilkes. They gradually began to expand, doubling the number of milking cows from around 30, to 65 and growing the farm, which now encompasses around 600 acres, which are mainly planted in corn, soy and hay. They rent an additional 240 acres for cash crops.

Ken says that GPS is the technology that has revolutionized the farming industry and made it possible for him to farm nearly 1,000 acres, largely on his own.

“My grandfather always said that the best thing that was invented in his time was the chainsaw. My father said, for him, it was tile drainage. For me, it would have to be GPS guidance and auto-steering. I used to come home tired and now I can plow all day. History will tell us if robotics is the next big change for our farm and if we are making the best decisions for the success of our family and our farm,” said Ken.