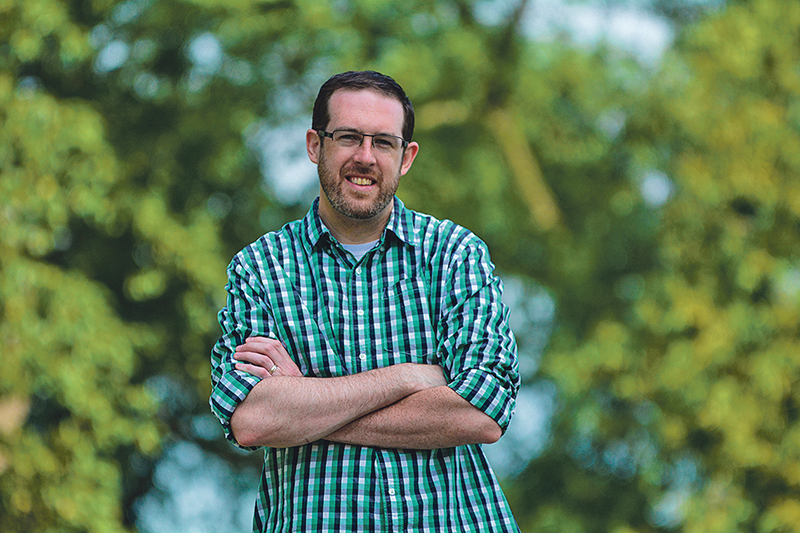 He says affordable living, front-line service, and small businesses are among his priorities

Vankleek Hill resident Derek Duval is seeking the nomination to become the Ontario PC Party’s candidate for Glengarry-Prescott-Russell. Duval’s move into politics is not something he takes lightly.

He has been thinking about throwing his hat into the ring since the last election.

“That loss hit me hard,” says the 33-year-old Duval. The next provincial election is tentatively scheduled for June, 2018.

If people have lost faith in the political system, or their government, Duval says it might be in part because issues are simply not being addressed.

“Life is becoming unaffordable. It’s unaffordable for people, for businesses, and for farmers. We’re building infrastructure to help people but sometimes, it is hurting people, says Duval, pointing to Hydro One, which he says is encouraging people to reduce energy consumption and has installed smart meters to drive consumption to less expensive energy-use time periods.

“They want people to use less electricity, but then jack up the price of off-peak hours,” he says, giving one example. “And then we hear they are not selling enough electricity,” says Duval.

Duval says this is just one example of programs being launched before there is careful thought about the end result.

“I believe in green energy, but it has to be affordable and effective for families,” Duval continued.

“There are actions, but no one is looking at the outcome,” Duval says. “Someone needed to think that if we reduce electricity consumption, that will mean less revenues.”

But the net result, according to Duval, is that people cannot get ahead.

He is the first to admit that sometimes, answers are not clear, but says decision-makers need to study a situation and look at it more closely before taking action.

Duval wonders what is happening in other areas that the electricity rates are lower than here. “How can you attract businesses when there are cost differences like this?” he asks.

Front-line service, should be a priority when it comes to items like health care and education, Duval says. These are the two of the highest-budget items for the province, he says, and services like nursing and mental health support which help people need to be the focus, not more bureaucracy.

Duval says that he has lived his entire life in Vankleek Hill and that he has always known that he wanted to live his life here. He says his current work in the manufacturing sector and previous experience owning his own construction company working on local farms means he knows what it is like to run your own business and has seen how hard farmers work.

For Duval, making sure that government does not put obstacles in front of small business owners is important. He gives the example of the Ontario Registered Pension Plan, which will require business owners to match a 1.9 per cent contribution by employees, for a total of 3.8 per cent into a pension plan. The program will be phased in beginning in 2017. “Every time a business owner takes a step ahead, something else comes up,” Duval said.

Choosing to stay here over the years made Duval appreciate that for many people, staying in their home town in rural Ontario is not a possibility. Young people must often move to urban areas to find jobs.

Duval hopes that will change. “We do have businesses here that are growing and employing young people. Let’s hope that we can create the business environment for more of that to happen,” Duval says.

At the heart of his desire to enter politics is his continuing desire to help his community.

“My father never pushed me into politics, but he did push me into community service,” says Duval, referring to his father, Paul Emile Duval, who has been a municipal councillor for the Vankleek Hill ward, and previously, for the Town of Vankleek Hill, for about 35 years.

Duval stresses that he knows it is a long road ahead. Winning the nomination to represent the PC party at the riding level comes first, and for that, Duval needs people to become voting party members and vote at the nomination meeting which will take place at the Glengarry-Prescott-Russell riding level.

Duval is at work recruiting PC party members who reside in Glengarry-Prescott-Russell.

Duval says that he is looking forward to talking to people and hearing the different sides to all of the issues.

“I am willing to put in the time to do what needs to be done to get the results,” says Duval, adding, “I am going into this with a clear understanding of what to expect. If I am the underdog, I plan to outwork the other contenders.”

He and his wife, Kristin, have discussed what it will mean if Duval gets elected and must work at the provincial legislature for part of the year. His wife, who works for the Royal Canadian Mounted Police, is equally committed to her husband’s move into politics and where it might take them.