Cougars firing lots of shots, but goals in short supply 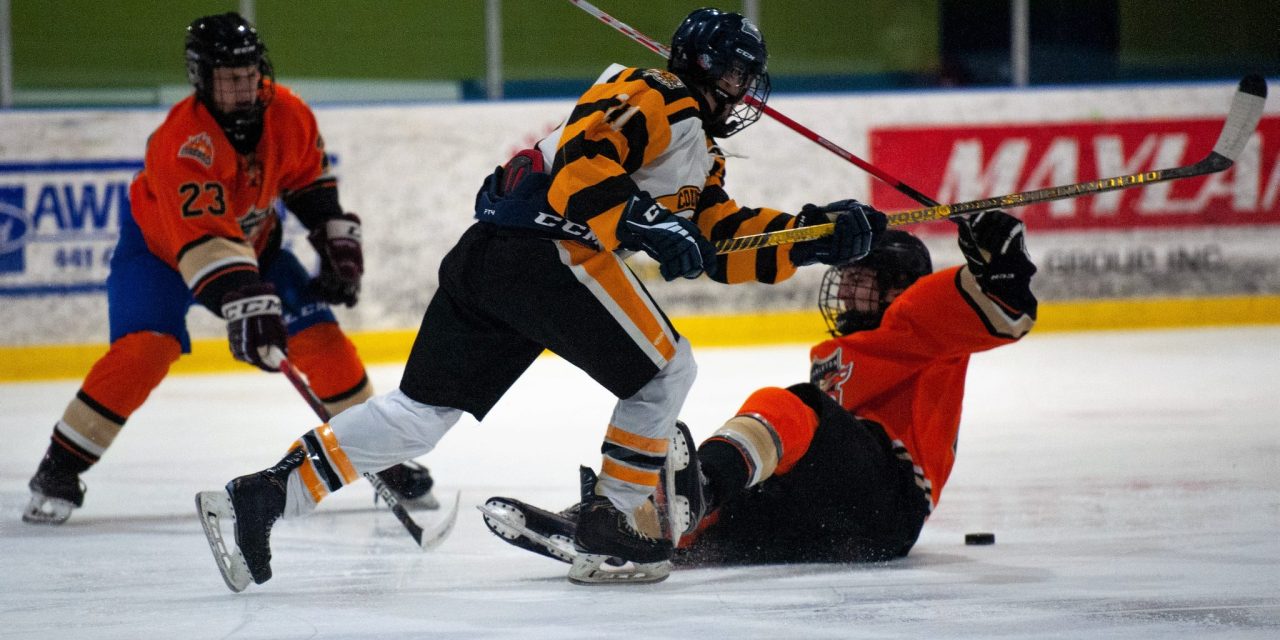 Vankleek Hill Cougars forward Alexandre Chenier (21) battles with two Almonte players for the puck. Chenier scored the lone goal for Vankleek Hill in the Cougars’ 4-1 loss to the Inferno at the Robert Hartley Sports Complex in Hawkesbury on Sunday, December 18. Photo: Yeon Photography

The shots on goal numbers look impressive, but the goals just aren’t coming for the Vankleek Hill Cougars.

Vankleek Hill played a fantastic game on the road in a 5-5 tie with the Clarence Castors on Saturday night (December 17), before losing at home on Sunday 4-1 to the Almonte Inferno. As has often been the case this season, the Cougars outshot the Inferno by a wide margin, but could not find the back of the net on their chances.

Vankleek Hill will enter the National Capital Junior Hockey League’s Christmas break in sixth place, with a record of 10-7-1-2. The Cougars will be back in action on Friday, January 6, 2023, against the Westport Rideaus in Westport.

Alexandre Chenier had the lone goal for the Cougars and rookie netminder Jeremie Tessier made 35 saves, as Vankleek Hill (10-7-1-2) dropped a 4-1 decision to Almonte (5-13-2-2) on Sunday evening (December 18) at the Robert Hartley Sports Complex in Hawkesbury.

The Cougars fired 46 shots at the Inferno net, but were only able to get one of those past Almonte goaltender Tiger Ramcharitar, who was outstanding in the contest.

Vankleek Hill has played multiple games this season where the team has outshot its opponents by a large margin, but has not been rewarded. Making opposing goaltenders look like National Hockey League Hall of Famers is something the Cougars hope to get away from after the Christmas break, said Head Coach Franky Dopelhamer.

“We can’t buy a goal,” Dopelhamer noted. “The guys played hard and they played well yesterday.”

“We have to find a way to put the puck in the net. We will figure it out.”

Two periods of overtime were not enough, as the Cougars and Castors tied 5-5 on Saturday evening (December 17) in Clarence Creek.

A goal by Andy Lightle-Blais staked Vankleek Hill to a 1-0 lead after one period before the fireworks began in the second frame. Vankleek Hill found the back of the net three times, and led 4-1 with just three minutes left in the period before getting into penalty trouble. The Castors scored three goals in the last 2 minutes and 38 seconds to end the third period tied 4-4.

The Cougars trailed 5-4 in the third and killed off a full two-minute two-man advantage midway through the period, before Alexandre Saul scored with just over six minutes left to tie the game up 5-5. Neither team could score in the five-minute overtime period.

Lightle-Blais had two goals on the night for Vankleek Hill, while Saul, Brenden Easterbrook and Joshua Desjardins had singles. Alexandre Charlebois scored twice for Clarence, with Tristan Bolduc, Nicholas Gaumond and Cooper Hudson also finding the back of the net for the Castors.

The defending NCJHL champions, the Castors in fourth place in the NCJHL standings, just one point behind Gatineau-Hull in third and four points behind South Grenville and North Dundas, who are tied for first with 35 points.

The Cougars are back in action on Friday, January 6, 2023, when they travel to Westport to face the Rideaus. Vankleek Hill is back home at The Bob in Hawkesbury on Sunday, January 8, to host the Morrisburg Lions.

– with files from Mac Hinton