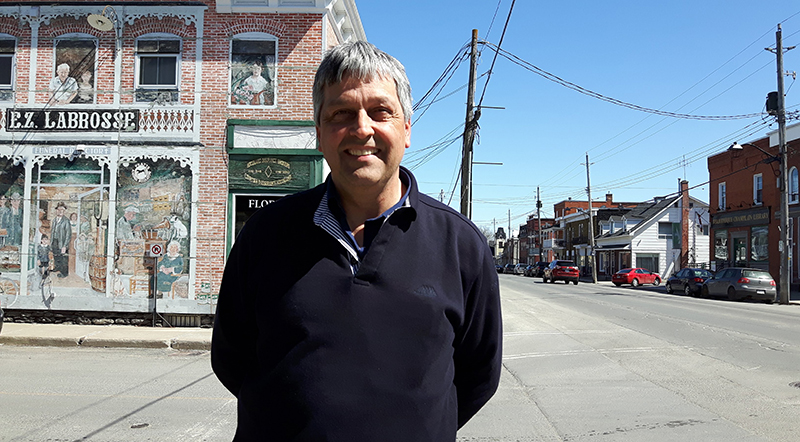 Normand Riopel is both grateful to and ready to continue working for residents and businesses in Champlain Township after being acclaimed to a second term as mayor.

“I was very relieved on August 19 when I saw that nobody put their name (forward),” said Riopel, who was elected to his first term as mayor on October 22, 2018. “People gave me a chance and they got to know me – they got to see who Normand Riopel was. I appreciate them very much.”

The mayor said he considers his acclamation an election win – crediting the township’s staff and fellow councillors for making his first term as mayor successful.

“If you don’t have a good team, you’re not on top of your (game). I had a good team on council and I also had a good team with the employees,” Riopel said, noting his 31 years of experience – 27 years as a councillor and now four as mayor – helped him in the position. “What I had to learn was how to direct meetings – that was a challenge.”

The mayor said he is particularly proud of grants the municipality obtained over his first term, saying he has worked hard to get the ears of provincial cabinet ministers. He and council also focused on infrastructure and taxes.

“I had a vision and council supported my vision. We went ahead with investments and (rebuilding) infrastructure,” Riopel said. “I think maintaining a tax rate in the past four years below the cost of living shows a lot in regards to budgeting, infrastructure and employees.”

While controversial at the time, Riopel believes the repairs and renovations done to the Champlain Library were a worthwhile investment for families in the community and for Vankleek Hill’s Main Street. He noted a significant portion of the cost was offset by a provincial grant.

“Council was concerned in regards to investing $454,000 into the library. The building back then was worth $168,000,” the mayor said, pointing out that real estate prices have risen significantly over the past two years. “I don’t think after the pandemic people can say the same story. I think it was a very, very good decision on council’s part to look beyond the (value) of the building.”

“I’ve had only positive remarks in regards to the library.”

Focus on infrastructure and growth

Looking forward to his next term, Riopel said he plans to focus on infrastructure updates, attracting business and industry to the area, and making Champlain Township a desirable place for young families. He cited the current renovations being done to the Vankleek Hill Community Centre as an example.

“It will encourage young families to come and visit our area, because we’re maintaining our infrastructure,” the mayor explained.

Infrastructure and encouraging young families to move to the region are also a focus for Riopel in L’Orignal, where the waterfront on the Ottawa River is a major attraction.

“(L’Orignal Beach) has improved tremendously. It is amazing. In the summer it’s always full,” Riopel beamed, adding that during his next mandate as mayor, Champlain’s staff will present a major plan with regard to all of the parks in the township. “(Parks) very important to our community. They’re very important to young families and everybody who lives here.”

L’Orignal’s infrastructure is currently undergoing major work and the mayor said future sewer upgrades and other maintenance will continue.

“(L’Orignal’s infrastructure) is 60 years old – some of it is older,” Riopel observed, adding infrastructure updating is also a priority in Vankleek Hill and other parts of the township. “We need to invest in infrastructure. It is a must. That’s part of the vision.”

“We just have to work harder with Hawkesbury,” Riopel said. “(Find) the right avenues that will work for both of us.”

The mayor noted that employees of businesses in Champlain south of Highway 17 will likely end up residing in Hawkesbury.

“These people will move here and generate different revenues for either Champlain or Hawkesbury. It would be to (Hawkesbury’s) advantage. I think we will come to an understanding and I hope this term will be the (time).”

One of the challenges going forward in Champlain Township will be balancing tradition with growth, Riopel said, noting change is inevitable. Growth will also help ease the future tax burden on residents of the township, the mayor explained.

“We need to grow in order to be able to move forward. If you remain as is, you have to dig deeper into people’s pockets.”

Citing the new subdivision currently underway in Vankleek Hill, Riopel said such developments are necessary for the future of Champlain.

“We have to attract young people to attract businesses. If you don’t have a workforce that’s willing to work, these businesses will not come.”