Agnès Grondin re-elected in Argenteuil amid CAQ sweep across Québec 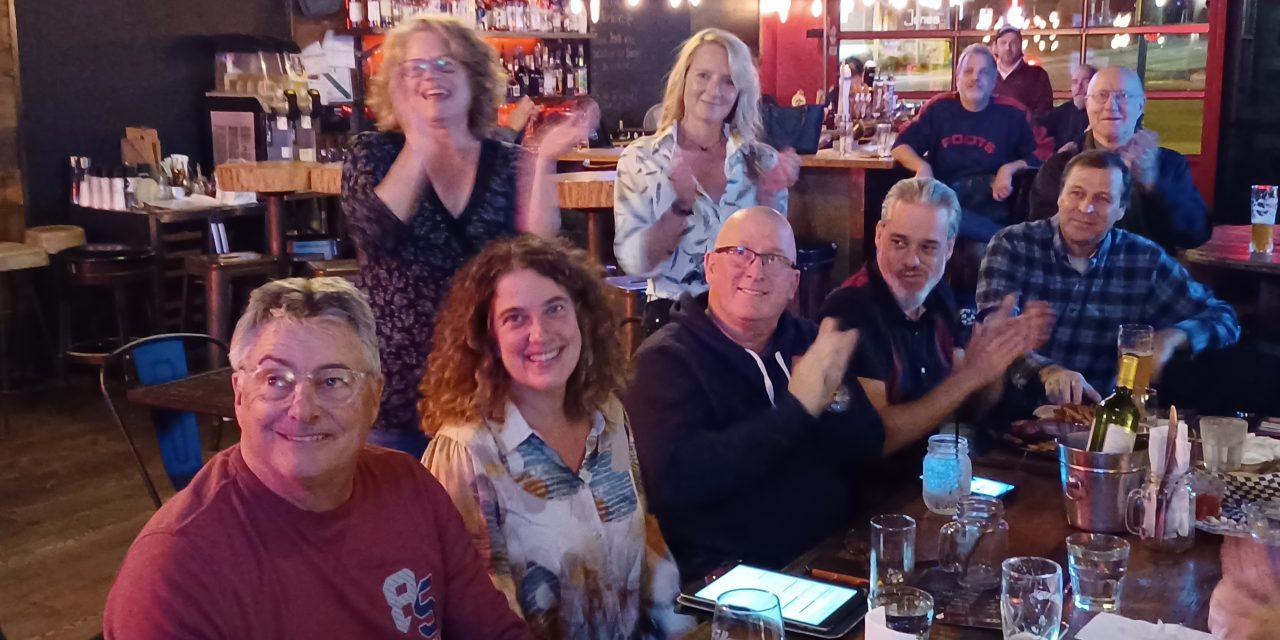 Argenteuil CAQ candidate Agnès Grondin, front, second from left, smiles with supporters at Code Rouge bar in Lachute on October 3 when the news arrived that she had been re-elected as Member of the National Assembly for the district. Photo: James Morgan 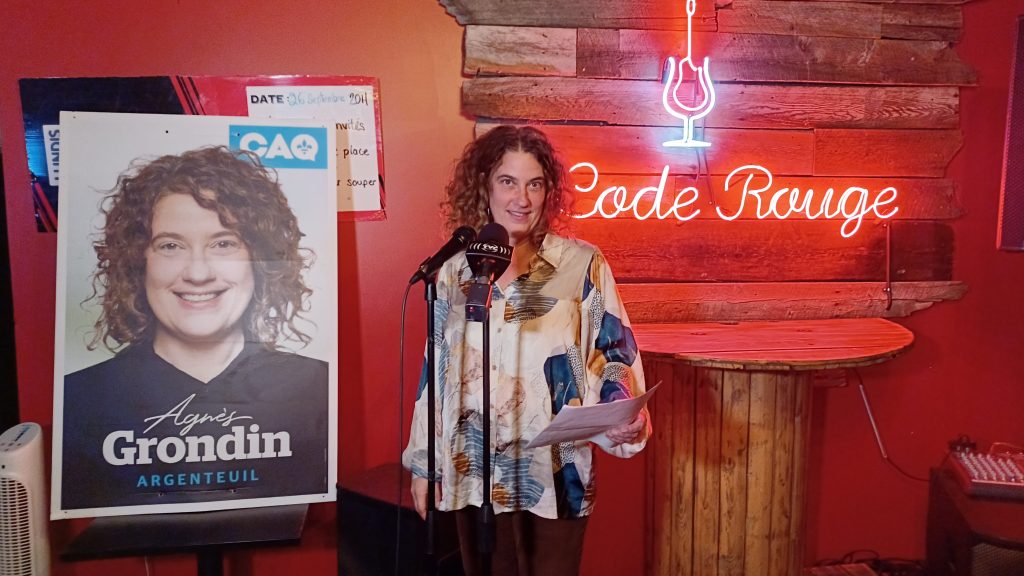 Agnès Grondin will continue to serve as the Coalition Avenir Québec (CAQ) Member of the National Assembly for Argenteuil. Grondin, who was first elected in 2018, was re-elected in the MOnday, October 3, Québec provincial election, which saw the CAQ under Leader — and Premier, François Legault returned with a strong majority government.

“I will continue to represent all residents of Argenteuil,” she remarked.

Grondin said she will continue to support the interests of local municipal leaders, and the leadership of community and social services organizations across the district.

After thanking a long list of campaign workers, Grondin commented on how the campaign in Argenteuil was characterized by respectability between the candidates and she hoped each candidate will continue to be politically engaged.

Grondin said her first priorities in the new four-year mandate are to ensure there is support for local initiatives and projects. She mentioned the ongoing challenge of restoring a former church in Lachute as the city’s new public library as an example. Improving access to health care services was a major priority for Grondin throughout the campaign. She said one of her priorities is to ensure all residents of Argenteuil have access to health care professionals, including doctors and long-term care facilities, when they need them.

Placing third in Argenteuil was Parti conservateur du Québec (PCQ) candidate Dr. Karim Elayoubi with 4,665 votes or 14.84 per cent of the popular vote.

Elayoubi, a Lachute physician, said his campaign enjoyed support from younger voters and had a strong base, but not enough to win an election. He was not shocked by the outcome of the election.

“I’m not totally surprised by the results,” Elayoubi said at Resto-Bar Le Caucus in downtown Lachute, where his supporters had gathered.

The emergency room doctor was involved with drafting the PCQ platform on health care. It included reforming the Public Health Act, increasing admissions to medical schools and overseas physician recruitment, and more private sector involvement in health care. Elayoubi said he is hopeful the PCQ health platform will serve as an example for the CAQ government to follow during the term ahead.

Marcel Lachaine of Québec Solidaire was in fourth place with 3,289 votes and 10.46 per cent of the popular vote in Argenteuil.

“I’ll definitely try to understand what happened,” said Liberal candidate Philippe LeBel, at Restaurant Olive in Lachute, where his supporters had assembled for election night.

LeBel wondered if news coverage caused already strong CAQ support to gain momentum during the campaign. He said the results did not reflect what he was hearing from voters he spoke with. LeBel acknowledged there is still some dissatisfaction with the PLQ, due to the unpopularity of former Premier Philippe Couillard’s government, which was defeated in 2018.

Despite the loss, LeBel believes Liberal support is not dead in Argenteuil — once a stronghold for the party. He said his public presence was strong throughout the campaign and he plans to remain engaged in the political process.

“Politics is not done for me at all. I’ll always stand up for what I believe in,” LeBel said. 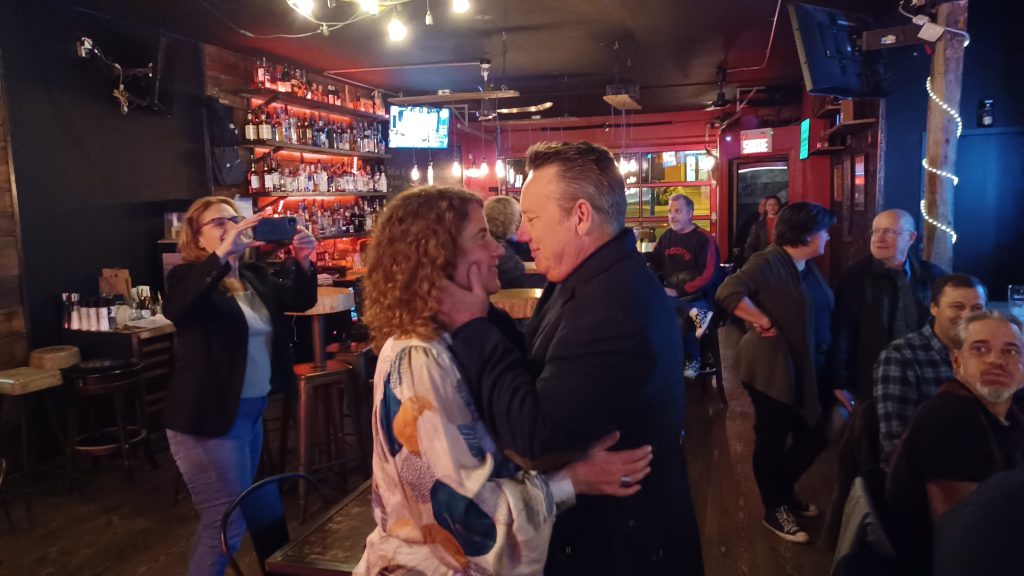 Announcement of the Coalition Avenir Québec (CAQ) victory was swift on Monday evening. The polls closed at 8 p.m., and at 8:10 p.m., Radio-Canada predicted there would be a CAQ majority government.

According to Élections Québec, the CAQ was leading or elected in 83 of 125 districts as of 12:13 a.m. on Tuesday, October 4. The CAQ had received 1,607,267 votes and 41.22 per cent of the popular vote as of that time. Leader—and Premier Francois Legault was re-elected in his district of L’Assomption in the Lanaudière region.

The Liberals will form the Official Opposition in the National Assembly with 23 members. The party, which has governed Québec the most since Confederation, had its worst election result ever on October 3. However, Leader Dominique Anglade retained her seat in the Montreal district of St-Henri-Ste-Anne.

Socialist Québec Solidaire will have the third-largest number of seats in the Quebec legislature during the next four years. As of 12:20 a.m. on October 4, Québec Solidaire was leading or elected in 10 districts. Co-Leaders Manon Masse and Gabriel Nadeau-Dubois were each re-elected in Sainte-Marie-St-Jacques and Gouin, respectively.

Monday’s election results were the worst ever for the Parti Québécois (PQ). Commemorations of the 100th anniversary of the birth of party founder and former Premier René Levesque, did not translate to significant victories for the PQ on October 3. The party was elected or leading in just three districts as of 12:27 a.m. on October 4. PQ Leader Paul St-Pierre-Plamondon did however win in his constituency of Camille-Laurin. St-Pierre-Plamondon did not have a seat in the National Assembly prior to the election.

As of 12:30 a.m. on October 4, the Parti Conservateur du Québec (PCQ) had received 13.09 per cent of the popular vote across Québec, but the showing did not result in any wins for the party, including for Leader Éric Duhaime in the district of Chauveau.

The Parti vert du Québec/Green Party of Québec had received 0.75 per cent of the popular vote and no seats across the province as of 12:36 a.m. Tuesday.