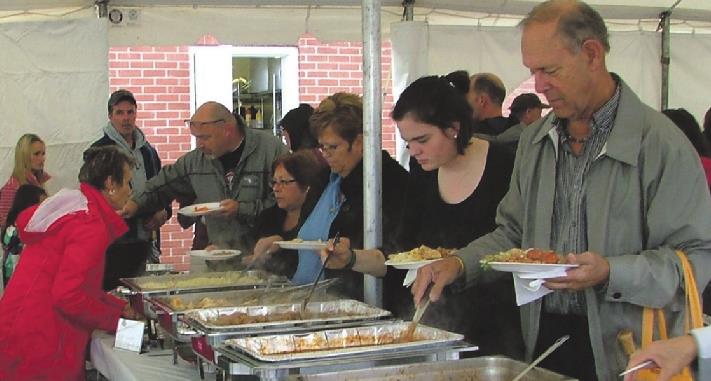 Despite heavy rain, hundreds of people flocked to the 2012 Plantagenet Bean Festival to eat and enjoy a variety of entertainment under the big white tent. Photo: Review Archives

Beer was flowing at Beau’s Oktoberfest

The Review, October 3, 2012 – VANKLEEK HILL – Thousands of visitors descended upon the Vankleek Hill fairgrounds last weekend to enjoy frothy beers and participate in the 2012 edition of Oktoberfest, organized by Beau’s All Natural Brewing Company. Events included the beer dunk tank, a spouse-carrying contest, and a sausage eating contest – to name just a few.

The Review, October 8, 1997 – HAWKESBURY – Four hundred École secondaire catholique régionale de Hawkesbury (ESCRH) students paraded down Main Street on Friday morning, in an impromptu demonstration against education reforms. After chanting in front of École Paul VI, they entered through a side entrance. The students at the head of the parade took the first stairwell available and brought their protest to a dead-end in a basement room that had “Good day all you nice people” written neatly on a blackboard.

The Review, October 4, 1972 – HAWKESBURY – Rehearsals are underway for the Prescott Players’ fall dramatic production ‘Mary, Mary’, a comedy by Jean Kerr, at St. Jude’s Church Hall in Hawkesbury on November 21 and 22. Director Ray Dunn has selected a group of talented newcomers for his cast, including Roberta Histed as the title character Mary. Linda Belisle plays the attractive Tiffany, while Gerry Langlois portrays the handsome and charming Dirk Winston. You will also not want to miss the performance of Frank Siversky in a special part as a tax lawyer.

The Review, October 9, 1947 – HAWKESBURY – A car driven by William Myre went out of control near the Bridge Inn on Main Street in Hawkesbury early Tuesday, crashing into a power pole and causing $1,600 worth of damages. The car, a 1941 Buick, was travelling east and when reaching the Bridge Inn the driver lost control and crashed into a Gatineau Power post and a town hydrant. The heavy transformer on the post fell on the car. Fortunately no one was injured.

The Review, October 6, 1922 – VANKLEEK HILL – This week Vankleek Hill was visited by Messrs. Irving Stephens and William J. Conroy, who are making a tour of the world by foot. Immediately on arrival the proceeded to Mayor Wilson’s and received his signature to show they had passed through. These men must make the trip in seven years by walking, making 48 states in America before heading to Europe. They left Hollywood, California, on September 20, 1921, and travelled over 6,000 miles. Their only means of support is selling postcards. They received quite an ovation in this section.

The Review, October 10, 1897 – CASSELMAN – The villages of Casselman, South Indian and Cheney were completely wiped out by fire on Tuesday last, originating in the bush fires which had prevailed in their vicinity for several days. The fires got such headway on Tuesday as to drive the 600 inhabitants of Casselman out of their homes. Telephone and telegraph communication was completely cut out, so it was not until a relief train from Ottawa arrived at 8 o’clock that definite news could be obtained. Casselman and nearby South Indian (present day Limoges) are completely wiped out. A passenger on the train described the scene as awful. Villagers did not have time to save anything and rushed panic-stricken to the riverside and mute with terror, stood watching the awful devastation.