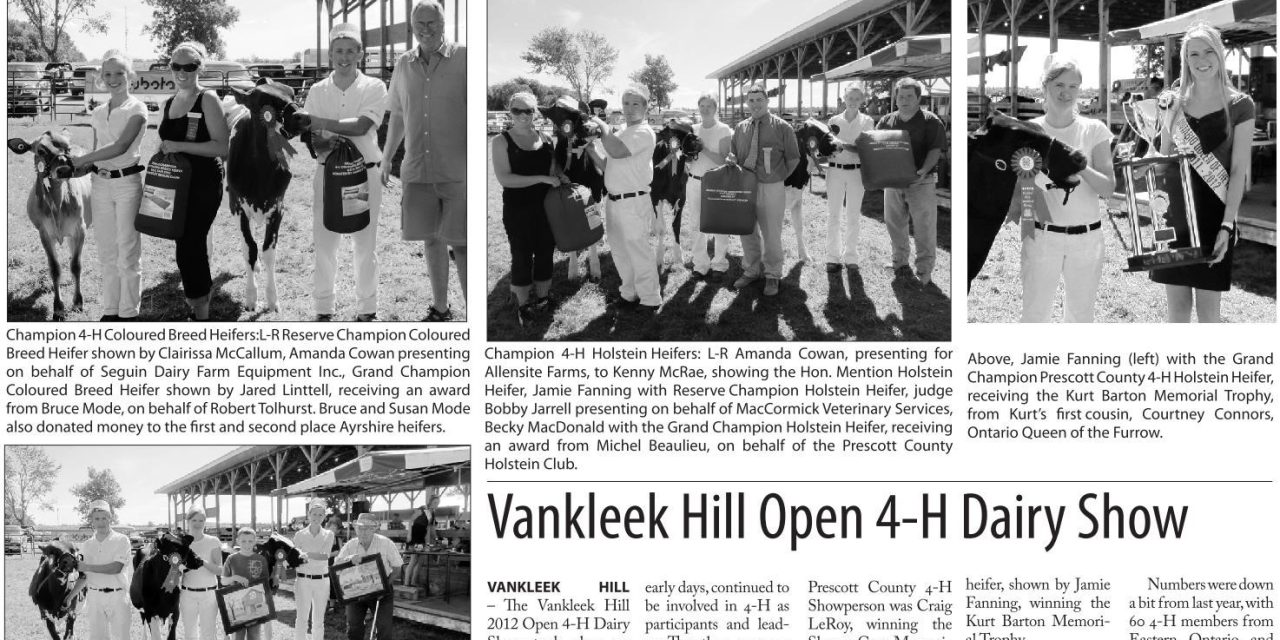 Clipping from the September 5, 2012, edition of The Review showing the winners of the Vankleek Hill Open 4-H Day. Photo: Review Archives

The Review, September 5, 2012 – CURRAN – For the past three weeks telephone service has been a major issue in Curran. Alfred-Plantagenet Mayor Jean-Yves Lalonde said he’s been receiving complaints from residents in Curran and the surrounding area that their phones were not working. The mayor said some households reported their phones had no dial tone, while others reported hearing a loud crackling. Bell Aliant stated it is aware of the issue and is dealing with the issue.

The Review, September 10, 1997 – HAWKESBURY – The former CIP mill site is being eyed as a location for a new multi-purpose recreational path. The town is hoping to reach agreements with the owners of the vacant land to permit the creation of the waterfront path, says recreation coordinator Pierre Desjardins. Another path is earmarked for a section of waterfront property between John Street and the municipal garage. Work on the waterfront paths will begin this fall.

The Review, September 6, 1972 – VANKLEEK HILL – Ratified by town council at the regular meeting on September 5 was the hiring of Miss Bernice Jackson from Cornwall as the director’s assistant for the new Vankleek Hill Day Nursery. Miss Jackson holds a degree in early childhood education from St. Lawrence College. Currently some 25 children are on record for the opening of the nursery, of which approximately half are from West Hawkesbury Township. The tentative opening date is Monday, September 18.

The Review, September 4, 1947 – VANKLEEK HILL – Two valuable barns were destroyed by fire during the severe electric storm last Saturday evening after being struck by lightning. The modernly built barn of Trafford Little of the McAlpine Farm was completely burned, along with about 70 tons of hay, two wagons and many farm supplies. The other valuable barn destroyed was on the Duncan McGillivray Farm near Vankleek Hill, now owned by J. Dagenais. The houses and outbuildings were saved at both locations, thanks to the excellent work of neighbours, who organized bucket brigades.

The Review, September 8, 1922 – VANKLEEK HILL – After many days of preparation and hours of anxiety regarding the weather, the directors of Vankleek Hill’s great fair are to be congratulated on the success of the 1922 edition. It will go down in history as one of the best fairs in Eastern Ontario. The cattle class, always good in Vankleek Hill, was better this year than ever.

The Review, September 8, 1897 – VANKLEEK HILL – Parties who intend on going to the Klondike gold fields should send and get the Yukon & Klondike Gazetteer. Abounding in photo engravings and maps, the Gazetteer gives the most reliable information as to routes, outfitting points, and climate. Also if you are going to the Yukon, don’t start without getting a trunk from A.X. Labrosse. The store has a large stock of trunks, valises and satchels suited to the wants of every traveller, no matter where they are bound or the climate.