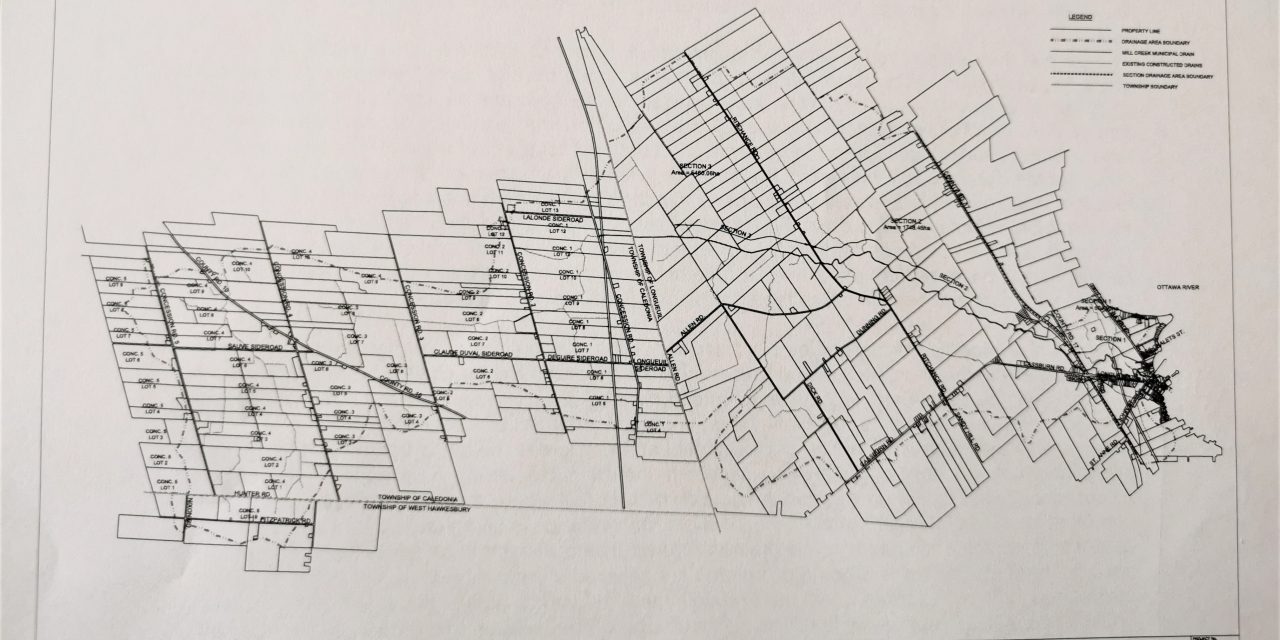 Plans continue for major repairs to the Mill Creek Drain.

On August 11, Champlain Township Council approved the receipt of the Engineer’s Report-Amendment and Emergency Work, which outlines where work is required, the nature of that work, and how it will be carried out. Councillor Michel Lalonde moved to accept the report and the motion was seconded by Councillor Gerry Miner. The report was prepared by Robinson Consultants Inc.

Also on August 11, council approved on third and final reading, the by-law to provide for the work to be done on the drain. Miner moved to adopt the by-law and the motion was seconded by Lalonde. The by-law had previously passed first and second reading at a special council meeting held on May 3. At that meeting, council also received changes and amendments from the engineers with respect to the size of workspace around the drain. The Mill Creek Drain project will be carried out in accordance with the Ontario Drainage Act.

The estimated cost of the improvements to the Mill Creek Drain is $2.3 million. The drain and drainage area affects more than 17,000 acres, 2,100 properties, and more than 500 landowners.

According to Drainage Superintendent Eric Leroux’s monthly report for June 2022, which was received by council on August 11, the draft of the most recent engineer’s report of the Mill Creek project was reviewed so appeals could be filed to the Court of Revision and updates could be made to the schedule of assessments. That schedule will determine the cost to each property owner affected by the construction. Leroux’s report explains the process involves appeals being filed by the Drainage Superintendent on behalf of the landowners for land severances, where the cost should be divided to reflect fair cost shares to each parcel of land affected. The Court of Revision is a legal process under the Drainage Act to make updates to the assessment schedule.

Leroux’s report explains there have been several meetings involving municipal staff and engineers regarding the procedures for the project. Research of the Hawkesbury Creek watershed plans and schedule of assessments has been performed to conciliate the details between the limits of the Mill Creek and the Hawkesbury Creek, so that recommendations could be made regarding some of the appeals in that area. Leroux also met with property owners to answer questions they had about the appeal process.

The first Court of Revision was held, and Leroux explained many cases were heard and resolved. According to the report, an unspecified number of cases were either denied or could not be presented at a Court of Revision. Property owners who had cases not related to the Mill Creek project assessments were given the option of appealing to the Ontario Land Tribunal (OLT).

Two additional land severances were also found and filed with the court to be updated. No additional Court of Revision is required because there are no changes to the schedule of assessment other than dividing the cost of one property in two and being partly pro-rated by the size of land in the watershed.