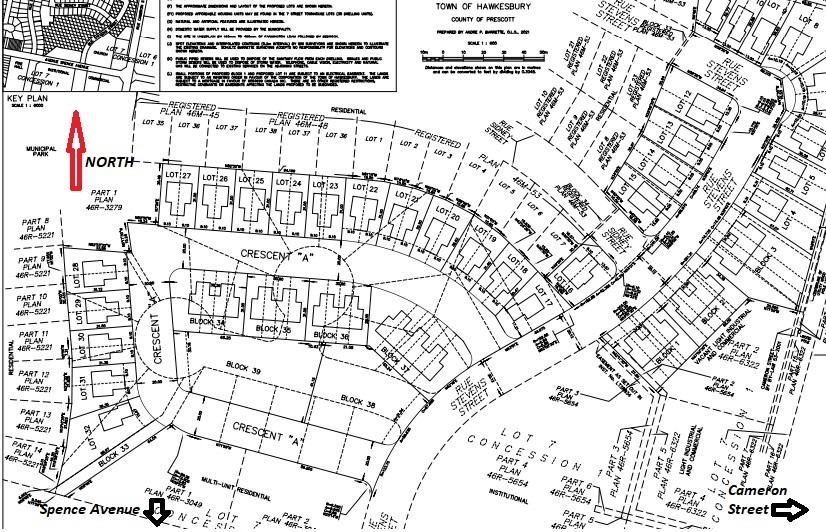 Part of a map showing the proposed Gateway to Mont-Roc subdivision. Map from Town of Hawkesbury planning documents.

Hawkesbury Council has defeated a recommendation to consent to conditions for a proposed new subdivision in the Mont-Roc neighbourhood near Spence Avenue and Cameron Streets.

On March 28, a public meeting was held on the proposal and residents of nearby streets expressed opposition to the proposal.

The original Plan of Subdivision for the Gateway to Mont-Roc development was for only single-detached houses, however the new plan would allow for increased building density on the 10-acre site, including five lots for single-detached dwellings, 48 semi-detached units, 30 townhouse units, and two blocks for 44 apartment units – a total of 127 new dwellings.

At the May 30 council meeting, Mayor Paula Assaly said many documents had been received, including a concept design of the dwellings and a petition from nearby residents opposing the development.

Assaly explained how the plan of subdivision conforms with the Provincial Policy Statement on land use planning, the United Counties of Prescott and Russell (UCPR) Official Plan, and Town of Hawkesbury Official Plan.

“It’s truly conditional due to a second step, the zoning amendment,” Assaly said.

Councillor Robert Lefebvre commented there was a great difference between the number of dwellings originally proposed and the new proposal. He identified three specific issues with new proposal. One was the density of the development, two was the loss of single-family dwellings, and three was that secondary dwellings such as basement apartments will be allowed on proposed the semi-detached dwellings. He also noted potential parking challenges.

Lefebvre said he understands the need for housing, but was concerned about what the project could result in from a planning perspective and could not support the recommendation.

Councillor Raymond Campbell agreed with Lefebvre and also expressed concerns about density and the proximity of the higher density development to existing single-detached homes. Campbell wanted to wait and reconsider the recommendation later.

However, Interim Chief Administrative Officer Samuel Cardarelli said a decision was needed on May 30, because of decisions required at the UCPR level. Council voted and the recommendation was defeated.