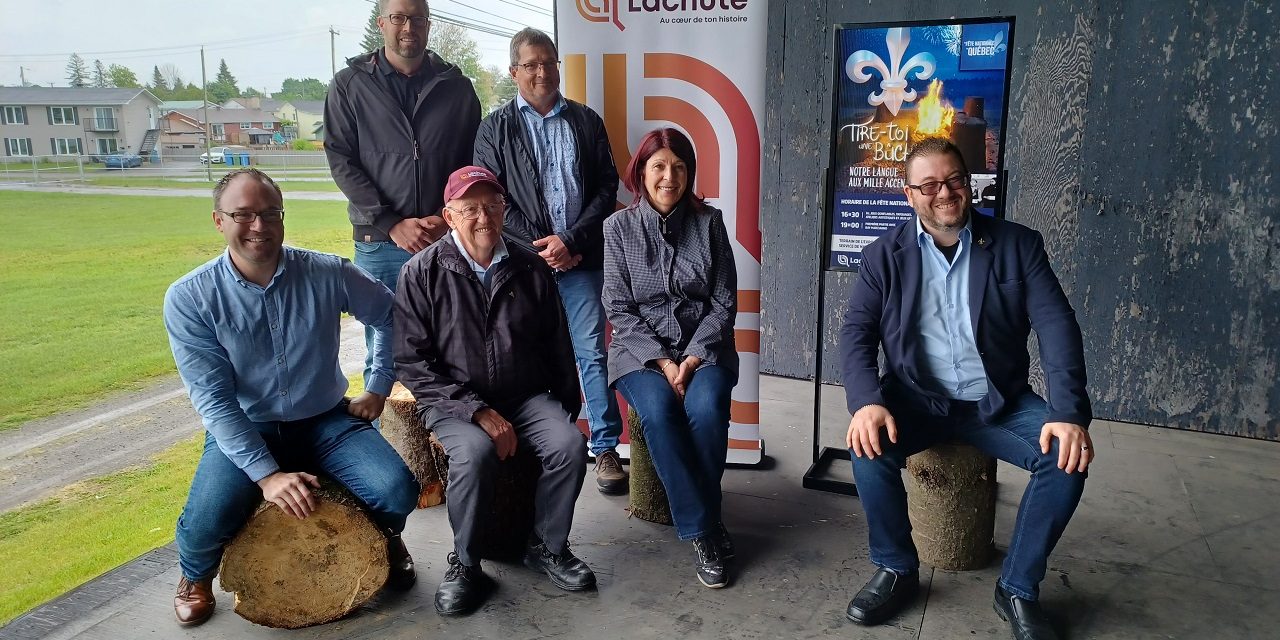 “Pull yourself up a log” is the slogan for this year’s Fete nationale celebration in Lachute on June 24. Municipal officials gathered to announce the celebration on June 9 at the fairgrounds, where the celebration will take place. From left to right, back row are municipal Recreation Division Chief David Toussaint and Lachute Director of Recreation André Primeau. In the front row from left to right are Lachute Mayor Bernard Bigras-Denis, Lachute Councillor Gaétan Larose, Councillor Guylaine Cyr-Desforges, and Councillor Hugo Lajoie. Photo: James Morgan

Québec’s big holiday, Fête nationale, also known as St-Jean-Baptiste is on June 24 and communities in Argenteuil are preparing big celebrations again after two years of online events, or none at all.

The theme across Québec this year for Fête nationale is “notre langue aux mille accents,” or our language of a thousand accents, a reference to the variation of French accents and cultural influences across in Québec.

In Lachute, the free Fête nationale celebration is being held on Thursday, June 23, at 4:30 p.m. at the fairgrounds with games and artistic workshops for all ages until 8 p.m.

On stage at 7 p.m., Ray Marcianno will perform. Marciano appeared on television under the name Rémi Basque during the second season of La Voix, the Québec version of The Voice.

After an address by Lachute Mayor Bernard Bigras-Denis at 7:45 p.m., the main show starts at 8 p.m., with Les Ti-Gars, a popular band from Lachute that will play all of the favourites associated with Fête nationale.

The sky over Lachute will light up with fireworks at 10:30 p.m. to wrap up the celebration.

“Tire-toi une buche!”, or pull yourself up a log is the slogan for Lachute’s Fête nationale celebration. The slogan is a longtime expression for inviting visitors to pull up a seat and enjoy themselves dating back to the days when there were sometimes more pieces of log to sit on around than actual chairs.

Food and drink service at the Lachute Fête nationale celebration will be provided by the Argenteuil minor baseball association as a fundraiser for youth baseball.

A free shuttle service to and from the fairgrounds will operate from 4 p.m. to 11 p.m. on June 23 for easier, safer, and more environmentally friendly access to and from the Fête nationale celebration in Lachute. The shuttle will make stops every 30 minutes across town. Two stops – one at the Villa Mont-Joie and one at the Médaillon d’Or – will be part of the circuit to facilitate the access for seniors to the festivities. The list of stops will be available at lachute.ca/fetenationale and on the Facebook page.

To celebrate Fête Nationale, the Ville de Lachute is encouraging residents to decorate the outside of their homes with blue and white and with Québec flags.

From 10 a.m., access to the site will be free until the end of the evening, with beach access until 5 p.m. There will be beach volleyball, from 2 p.m. to 5 p.m., activities and crafts for young people, and face painting. That evening at 7 p.m., there will be a tribute to the flag and speech by Mayor Kévin Maurice.

At 8 p.m., “Tassez-vous de d’là” a seven-member tribute band to 1990’s Québec group Les Colocs will perform. A 10-minute fireworks display and then a bonfire will close out the event.

Grenville festivities in centre of village

Fête nationale festivities are being planned for the centre of the village of Grenville on June 24 around the area of the community centre and Parc Normand-Woodbury.