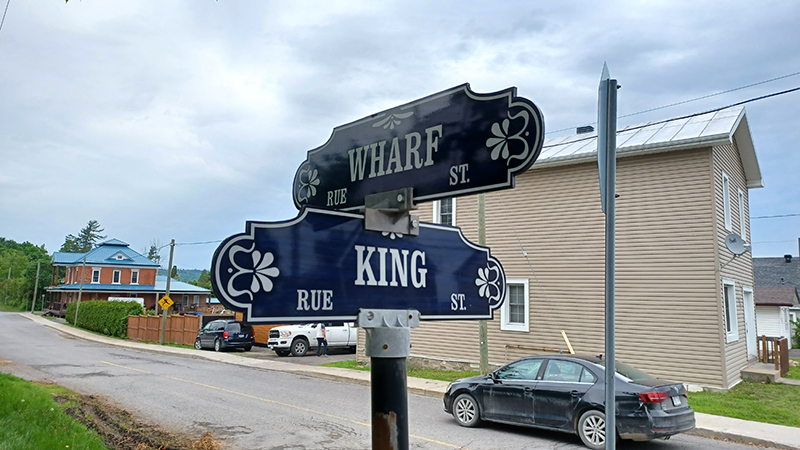 A major storm and sanitary sewer project, along with road reconstruction and sidewalk replacement, is set to take place in a section of L’Orignal during the next two years. Photo: James Morgan

Champlain Township has awarded the contract for the King Street Storm Sewer and Road Reconstruction project, approved as part of the 2022 capital budget. Cornwall Gravel Company Limited was awarded the construction contract; the company bid $4,455,491.70 plus HST for the contract. The only other tender submitted was from Clarence McDonald Excavation Ltd., which bid $6,121,444.50 for the job.

Subsequent to the bid, it was determined that an additional temporary water supply was not required, thanks to further discussions with Ivaco Rolling Mills, resulting in savings of $68,400, reducing the project cost to $4,387,091,70.

Thanks to federal and provincial grants, the municipality will receive $2,243,040.40 towards the cost of the work.

Like many small communities, aging storm and sanitary sewers coupled with extreme rain events have meant municipalities are searching for funding to rebuild infrastructure. Champlain Township has been pushing for this work for several years, but had not been successful in obtaining federal and provincial funding support up until now.

EVB Engineering prepared the tender documents and the project design. The work is taking place to address inflow and infiltration around the downtown areas of L’Orignal. The project will also address a flooding issue which has happened at the low point on Peter Street, between King and Marston Streets, during certain rainstorm events.

A report to council stated that the main work in 2022 will involve creating new stormwater infrastructure on Wharf Street, with a connection between King Street and the current Wharf Street outlet to the Ottawa River. The work on King Street will replace the AC Watermains, Storm sewers and will reline the sanitary sewers and will involve road construction with the exception of the final lift (layer) between Wharf Street and 30 metres east past Peter Street. The final asphalt paving will be completed in 2023 to avoid connection joints in the asphalt.

The report continues to say that in 2023, the main work will involve completing the underground infrastructure work and road rebuilt on King Street between John Street and Wharf Street, as well as a new overlay and sidewalks between 30 metres east past Peter to Dufour Street. A few storm sewer issues will also be addressed at Dufour Street.

Council was informed that the original budget estimate of $3,449,660 was lower than the $4.4 million amount of the lowest bid. EVB’s price estimate was also low compared to the bids, due to price increases related to fuel and material costs.