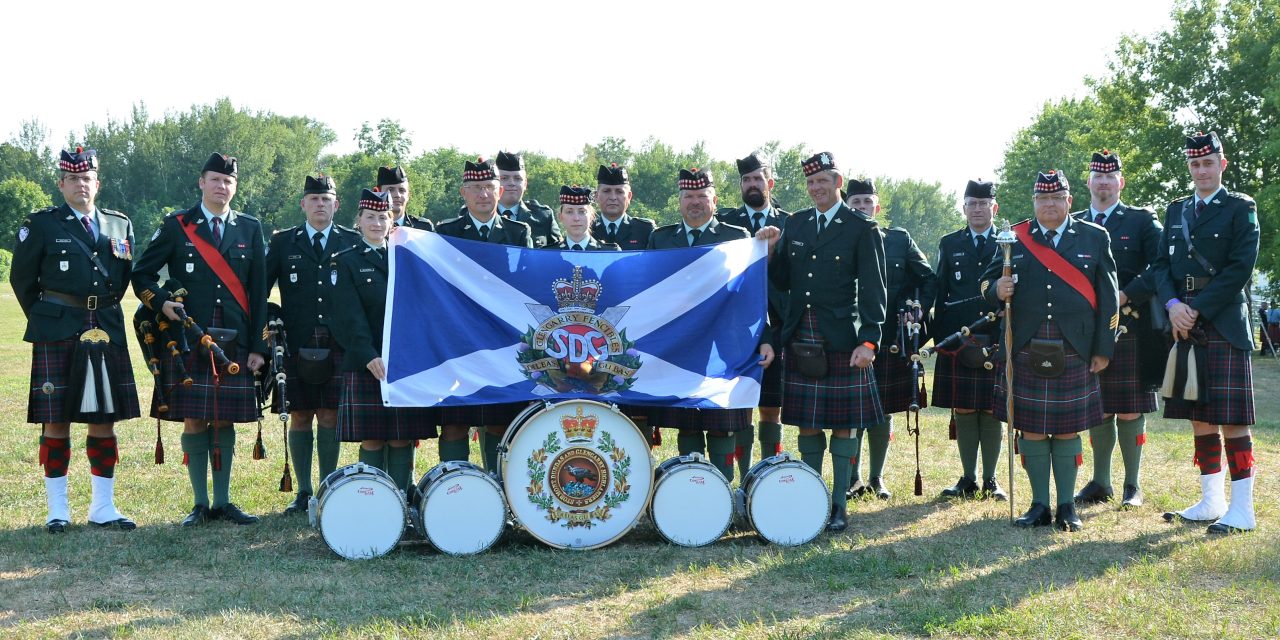 The Regimental Pipes and Drums of the SD&G Highlanders will be inducted in the Glengarry Celtic Music Hall of Fame on May 27. Submitted Photo

The 2020 inductees into the Glengarry Celtic Music Hall of Fame will finally be officially inducted and honoured at a dinner to be held on Friday, May 27, at the Bonnie Glen Pavilion near Alexandria.

Below are biographies of each of the inductees: 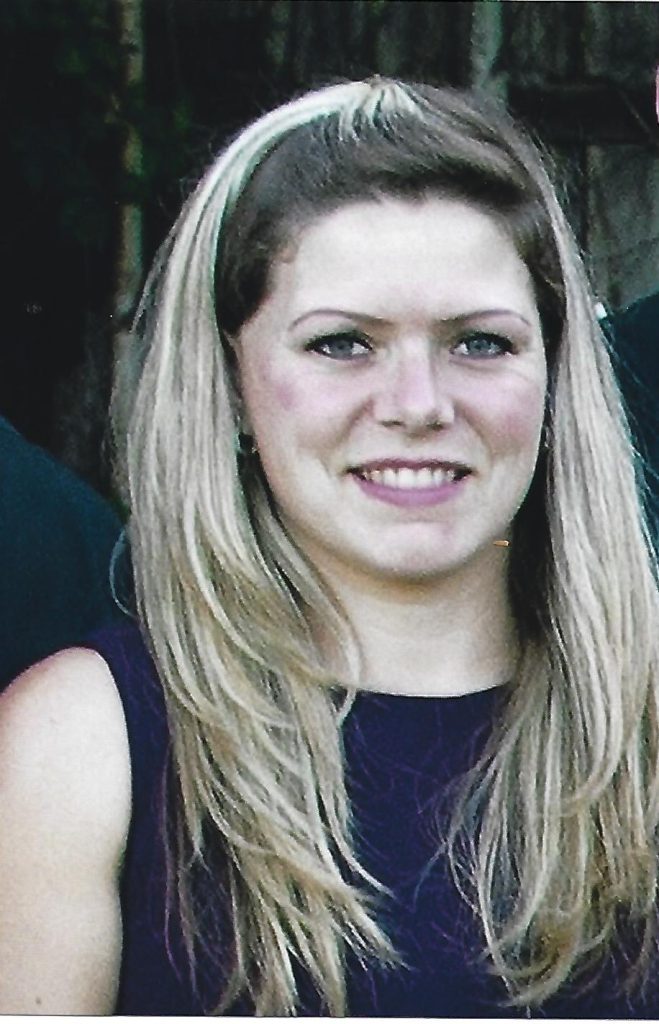 First taught by her dad, Ian, when she was ten and later by Denis Lanctot, Ashley MacLeod-McRae’s youthful exuberance and love for the fiddle made her a master artist of our time. She and her dad have helped to reignite the interest in fiddle music in Glengarry.

Ashley captured many awards in Ontario, Québec and the Maritimes and at age 14 was invited to play at the Canadian Grand Masters Fiddling Championships – an honour few attain. In 2003 she played with the Simon Fraser University Pipe Band. Playing with the band Hadrian’s Wall (which she continues to do) has taken her to Highland Games across North America. Her style and original compositions wowed audiences wherever she performed.

In 2003 Ashley was in New York City’s Carnegie Hall, playing with the Ottawa Police Services Pipe Band at their September 11 memorial. In 2004 she made a guest appearance on Country Music Television (CMT)with the sensational country star Johnny Reid.

Ashley returned to Vancouver in 2005, at the invitation of the Simon Fraser University Pipe Band, which sought her expertise on the fiddle and keyboard for its then upcoming release of On Home Ground Volume 1 and later on Volume 2 in 2006. This same year she opened for the original members of The Seven Nation Band called Clan Na Gael on their US tour.

The Brigadoons welcomed her playing with the group for 16 years. She also played with The Two Paddys, Soltice, a Montreal group, The Paper Boys from Vancouver with whom she toured Europe and was front line for Torridor Scottish Country Dance Band in 2015. She also formed the fiddle ensemble, Scotch River Fiddlers, that same year. She has composed and written slow airs, marches, jigs, strathspeys and reels.

In the past 20 years Ashley has taught fiddle, piano and step dancing to many lucky students. Extremely generous with her time and talents she has assisted with many recordings, workshops, fundraisers, benefits, concerts, and church events. In her own home, she created ‘Mini Music Makers’, a program for preschoolers, to instill in them the joys of fiddle.

This busy mother of four, along with her husband Chad, have taught Kenzie, Shelby, Glen Ian and Chancy the love of Celtic music. Two CDs have also been made of Ashley’s fiddle playing, some traditional, some of her own composition. She has also received her Bachelor of Education from Ottawa University in 2020 and enjoys full time supply teaching at Laggan Public School.

Glengarry and indeed many other places have been enriched by Ashley’s contribution to all things Celtic. She has accomplished so much in her young life and we look forward to her continued varied endeavours. 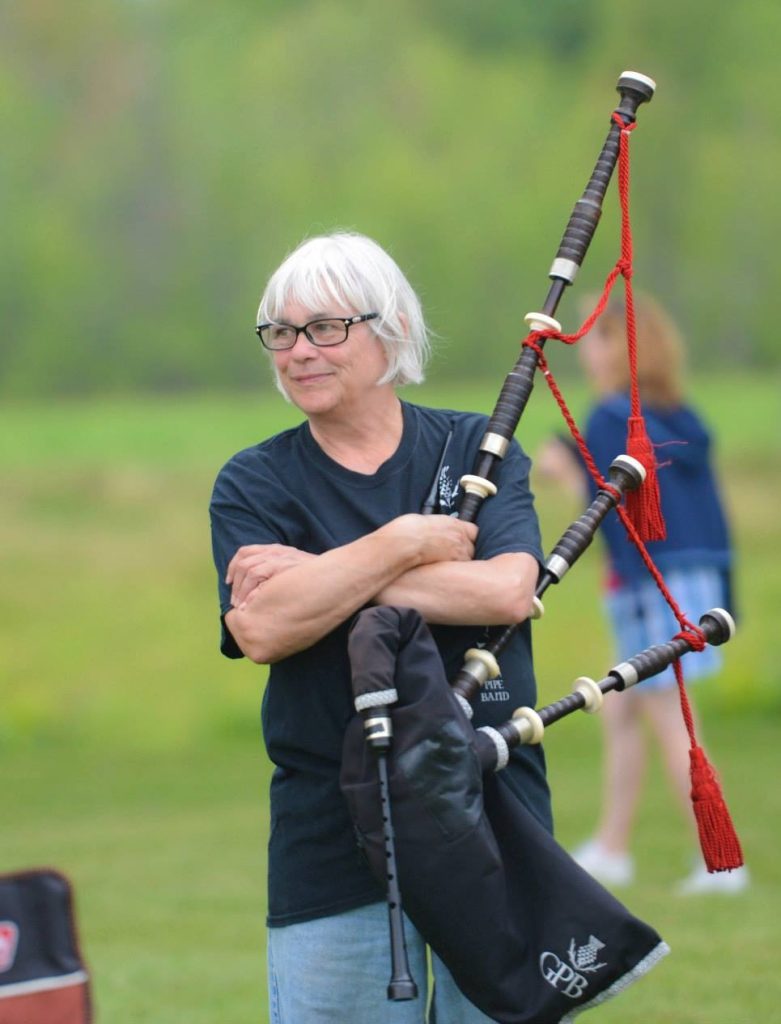 For more than 50 years Shelley MacPhee has been a driving force and heavily influential in the ongoing operation of the Glengarry School of Piping and Drumming. During this time, hundreds of students, a good number from Glengarry, have passed through the school, learning the fine art of Highland bagpiping and drumming.

Shelley’s piping career began in 1967 under the direction of Charlie Bell at the Glengarry School of Piping and Drumming (GSPD) in Maxville. Shelley’s mother, Sybil, was a member of the executive of GSPD and very supportive in this role. Shelley progressed quickly and her grade 8 teacher was the renowned Connie Kippen Blaney.

By 1970 Shelley joined the Glengarry Pipe Band under the direction of Pipe Major Dave Danskin. This afforded her many trips to Scotland. She spent a few years playing for the City of Brockville Pipe Band.

When Shelley had children, who later became accomplished pipers themselves, she honoured them with two new tunes written in their namesake; Captain John’s piobaireachd Lullaby for Iain and the famous Scott MacAulay hornpipe Emily Kate MacLellan.

In 1986 Shelley returned with her family to Maxville and resumed her spot in the band, beginning teaching at the GSPD even through the summer months. Her constant support matched with her constant pursuit of current pipe band best practices. Many of her bands were award winning ensembles locally and at world competitions.

Shelley worked closely with Robert Wilson and Janet MacCrimmon to rebuild the school after her mother passed. She received the Canada 150 Sesquicentennial Award for Community Service, was a 2020 selected Inductee to the Glengarry Celtic Music Hall of Fame and tonight she is being inducted in 2022.

Glengarry is so grateful to Shelley for her work, spreading and bettering the Celtic tradition of piping and drumming. May her contributions and gifts continue to influence our love of Celtic culture. Her own words describe what success means in piping and drumming.

“Success in pipe band relies on three things: really good instruction, good leadership, and everyone’s need to be given a chance.”

Regimental Pipes and Drums of the Stormont, Dundas and Glengarry Highlanders (Main Photo)

Shortly after Confederation in 1867, the 59th Stormont and Glengarry Battalion of Infantry, with headquarters in Cornwall, was organized under the authority of a Militia General Order on July 3, 1868, by the amalgamation of Companies of Volunteers Militia from Stormont, Dundas and Glengarry. Shortly after a pipes and drums band was organized, although it took several years for the band to adopt kilted dress. That happened in the 1920s.

When the 154th Overseas Battalion from the United Counties was raised in 1915 for service in Europe, it was not allowed to parade as a Highland unit, but it did have a pipe band. The Member of Parliament, Mr. John MacMartin, paid to have the unit kilted, and the Imperial Order of the Daughters of the Empire presented a silk flag before the journey overseas.

When World War 11 commenced, the SD&G Highlanders were in Debert, Nova Scotia, completing divisional training before heading overseas. Before this, the pipes and drums won first prize in open competition at the Antigonish Highland Games. Sometime later, two members of the band, Corporal Thomas Marshall and Piper Robert Wishart, played for Her Majesty Queen Elizabeth, the Queen Mother. Both men later served as Pipe Majors of the Regiment.

To this day, The Regimental Pipes and Drums of the SD&G Highlanders is comprised of serving and retired members of the unit, as well as civilian members. For 130 years this band has been known for their deep Celtic roots in Glengarry and adherence to the traditions of the Highlanders. Its roots in the Militia Companies of Glengarry, (No. 4 Company, Lancaster, No. 5 Company, Williamstown, and No. 7 Company, Dunvegan) have made outstanding contributions to Celtic music in Glengarry.

‘The Counties Own’ as it is affectionately called, whether participating in the Glengarry Highland Games, Remembrance Day services throughout SD&G or many cultural events, have always been ambassadors of Celtic music of Glengarry. In November of 2019 they represented the three Counties, as the band paraded to the War Memorial in Ottawa. They were heard also in Alexandria, as residents reflected on those who made the supreme sacrifice.

As they continue to give countless volunteer hours, practicing or at event ceremonies, the men and women of the band are true and unselfish ambassadors of Celtic music and culture. Whether playing in Eastern Ontario, Canada or abroad, we are so blessed and proud to have The Regimental Pipes and Drums of SD&G Highlanders in our community. 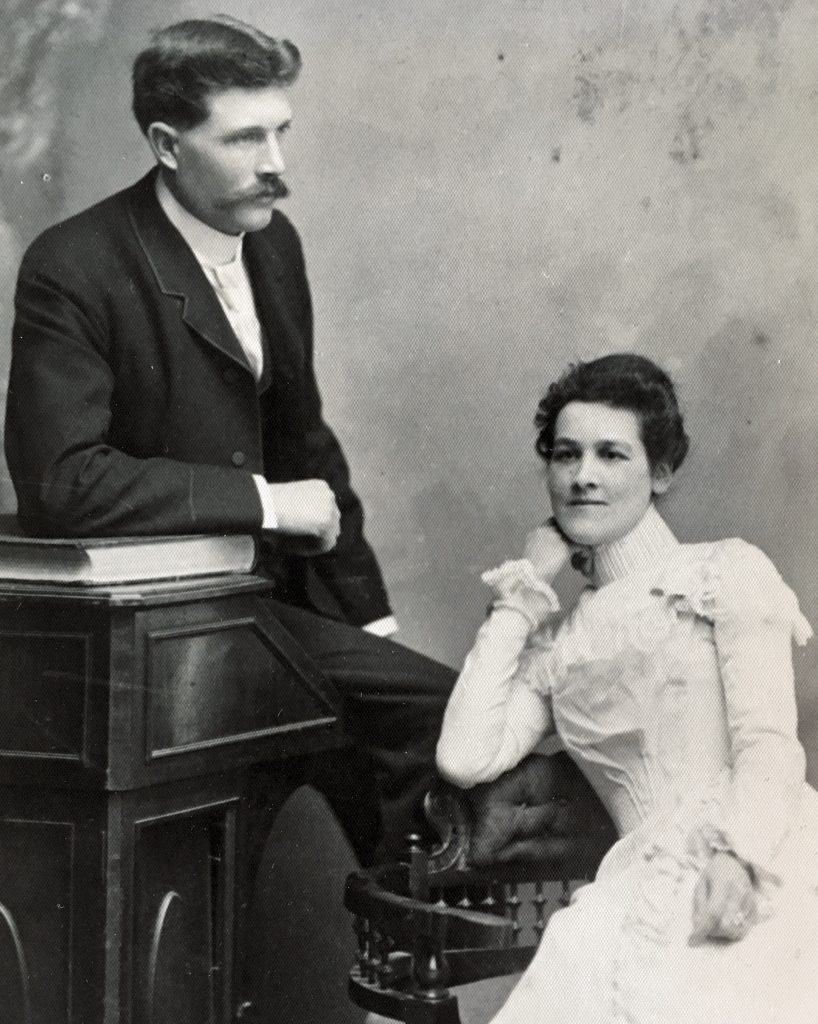 Alexander and Christina Watt were definitely a musical duo, he an accomplished fiddler and she, a piano music teacher. A cousin recalls that a parties could go on their house till the wee hours of the morning, with visitors playing until it was time to go home for chores.

Both were born in Quebec, Alexander on May 9, 1871 in St. Louis de Gonzaque and she, then Christena Alice McKell, was born February 14, 1873 in Riverfield. Before her marriage Christena taught music.

After their marriage they lived and farmed in Howick, Quebec for several years, before moving to Lancaster in 1903. It is said visitors would still come from Howich and would play for hours with nary a word spoken. The many Celtic fiddle tunes were serious business.

The couple established Maple Crest Farm in Lancaster and purchased purebred Ayrshire breeders. Their cattle were known far and wide.

After moving to Lancaster, Christena was active in church and community and was the organist in St. Andrew’s Presbyterian Church for many years. Sandy was an elder and a choir member. Music was such a big part of their lives.

The Watt home was a gathering place for young and old alike and their love of music was handed down to many. They played at many local gatherings as well as at the many ceilidhs they held at home.

They were buried a few weeks apart at the old stone church, South Lancaster.