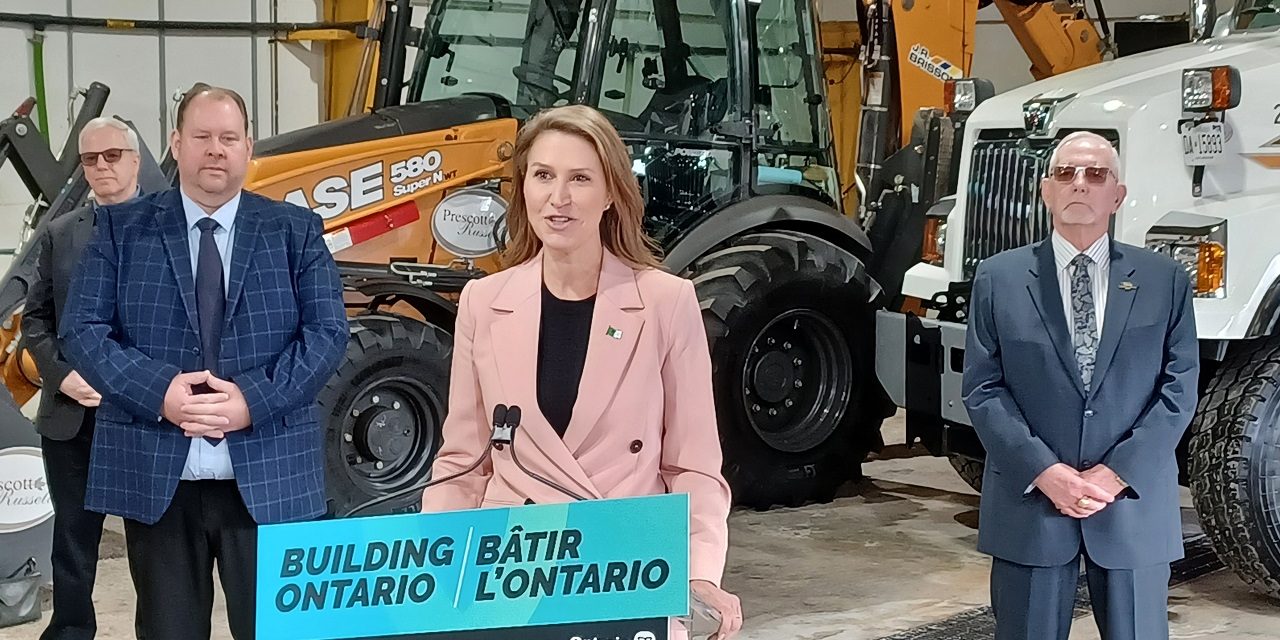 Ontario Minister of Transportation Caroline Mulroney, centre, announced the Connecting the East; A draft transportation plan for Eastern Ontario in Plantagenet on Thursday, April 21. In the background at far left is Stormont-Dundas-South Glengarry Member of Provincial Parliament Jim McDonell, Alfred and Plantagenet Mayor Stéphane Sarrazin is to the left of Mulroney, and UCPR Warden Daniel Lafleur is to the right of Mulroney. Photo: James Morgan

Ontario’s Minister of Transportation has announced a new plan for highways and public transit across Eastern Ontario.

The Connecting the East: a draft transportation plan for eastern Ontario – unveiled in Plantagenet by Caroline Mulroney on Thursday, April 21 – contains more than 50 near and long-term actions, including highway expansions and public transit improvements, that the government believes will help address gridlock, connect more people to places, and support economic growth.

The 50 actions are short on specifics for Prescott and Russell counties, but emphasize highway improvement needs in Ottawa, Leeds and Grenville, the Bay of Quinte region, and as far west as Lindsay.

Mulroney said she and the ministry remain committed to efforts by the United Counties of Prescott and Russell (UCPR) to address heavy traffic volumes and safety on County Road 17, which connects to municipal Highway 174 in Ottawa. The road was formerly part of provincial Highway 17 and was transferred to the UCPR and Ottawa in 1998. Mulroney said she has had many meetings with local government representatives about the need for improvements to the busy highway.

“We should have that enlarged,” said UCPR Warden Daniel Lafleur about the road.

Alfred and Plantagenet Mayor Stephane Sarrazin said the UCPR is most interested in securing financing to widen its section of highway. He is doubtful the section of 17 will become provincial responsibility again.

“I don’t think we’re looking at going back,” Sarrazin said.

“Our government is building Ontario by getting shovels in the ground on highways, roads and public transit needed to fight gridlock and keep goods and people moving,” said Mulroney.

The plan proposes improvements to local and intercommunity bus services,  along with support for the trucking sector by adding truck rest areas along Highway 401 and at the westbound travel information centre at Bainsville.

United Counties of Stormont, Dundas, and Glengarry Warden Carma Williams was also present for the announcement in Plantagenet.

To understand local needs and priorities, the plan has been informed by research, technical work, an online public survey, a series of Parliamentary Assistant-hosted roundtables, and a separate roundtable with eastern Indigenous communities.

“Connecting our smaller communities with the larger centres, creating more job opportunities, and ensuring the safety and efficiency of rural transportation networks are vital to the growth of our local and regional economies,” Lafleur said.

“As mayor of Alfred and Plantagenet, I welcome the Ford government’s steadfast dedication to seek the input of the public and local decision-makers to implement its long-term vision for eastern Ontario transportation,” said Sarrazin, who is running as a the PC candidate in the upcoming provincial election.

As part of the evolution of the plan, the province will conduct a long-range technical study of the transportation network. This work will involve broad engagement and will commence in summer 2022.