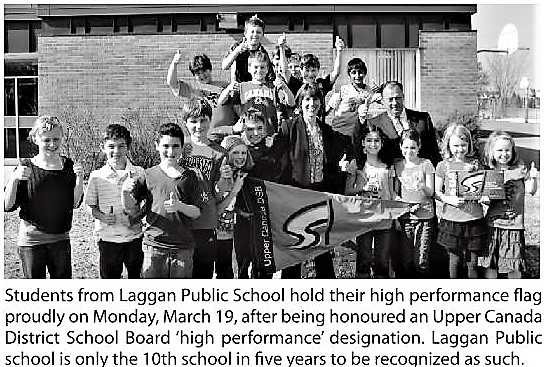 Photo and caption from the March 28, 2012, edition of The Review. Archives Photo

10 Years ago
HGH redevelopment to be axed?
The Review, March 28, 2012 – HAWKESBURY – Officials at Hawkesbury and District General Hospital are anxiously awaiting the release of the provincial budget, which they hope will reveal whether or not the hospital’s major redevelopment project will proceed as planned. Rumours have been circulating that the Ontario government will backtrack on planned construction of new hospitals and upgrades to existing ones, just months after Premier Dalton McGuinty promised them during a series of pre-election announcements.

25 Years Ago
VCI students suspended for protest
The Review, March 26, 1997 – VANKLEEK HILL – Nineteen students were suspended on Friday after staging an impromptu walk-out at Vankleek Hill Collegiate Institute (VCI). Students left the building on Thursday afternoon to protest the labour strife that has resulted in teachers adopting a work-to-rule stance. Teachers began their work to rule campaign on March 19 and will not participate in any extra-curricular activities. Talks broke off between the Prescott-Russell County Board of Education and the union local last week.

50 Years Ago
Lack of water dooms henhouse
The Review, March 30, 1972 – FOURNIER – A Saturday evening fire destroyed the poultry house and about 20,000 hens belonging to Mr. Marcel Laviolette. The fire brigades of Fournier and St-Isidore were unable to save the building because of a lack of water.

75 Years Ago
Newton barn almost complete
The Review, March 27, 1947 – VANKLEEK HILL – With nails and steel roofing and lumber, even cement, so hard to get, the man who intends to build these days has to do some planning ahead! Willie Newton’s barn is up and finished, except for a few box stalls that still have to be floored, so he must have found the material somewhere. His barn is now 170 feet long. It speaks well for his courage in the first place, that he had the nerve to think of building anything, even a chicken coop, in 1946.

100 Years Ago
To film ‘The Man from Glengarry’
The Review, March 31, 1922 – VANKLEEK HILL – On Tuesday evening Mr. Robert Pringle was in town, endeavoring to interest some of our moneyed citizens in the formation of the Ottawa Film Productions Limited, a National Canadian Motion Picture Company. The organization is nearing completion and among many of the Canadian stories they will film will be ‘The Man from Glengarry’, which will be photographed in the vicinity of Ottawa this spring.

125 Years Ago
Suspended sentence for remorseful thief
The Review, April 2, 1897 – L’ORIGNAL – The L’Orignal Advocate says the man Proulx, who appeared in court for stealing carpenter tools from the shop of Mr. Maloney, was let off by Judge O’Brian on a suspended sentence. Proulx pleaded poverty, saying the offence was committed in order to buy flour for his family, who were starving. He also stated he had regretted the theft and the following night returned all the articles he had taken, being ashamed to do so in daytime.