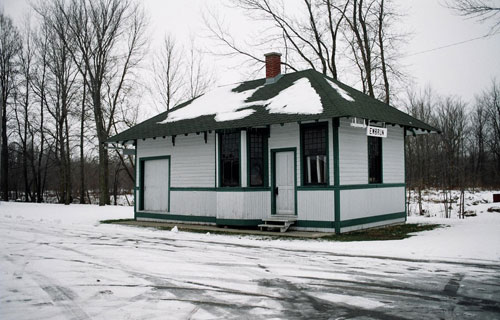 The former railway station in Embrun. Photo from canada-rail.com

Only cyclists and joggers pass by the old railway station in Embrun these days, but the future for the station is looking brighter.

On February 22, Russell Township Council approved a recommendation from the Parks and Recreation Advisory Committee to restore the historic railway station building, which once served passengers along the New York Central Railroad line that passed through Embrun.

By approving the recommendation, council agreed to keep the building in the municipality, to transfer funds allocated for restoration of the station from the 2021 budget to the 2022 budget, and to approve phase one of the restoration work, with the township’s portion of the costs to be covered using the transferred funds.

Council directed Céline Guitard, Director of Parks and Recreation, to work with a group of citizens behind the effort to restore the station and report back with a finance plan. Under that plan, the township will cover 50 per cent of the restoration costs, to a limit of $6,000.

The section of the former New York Central Railroad line through Embrun is now a recreational trail. The line was part of the New York and Ottawa Railway until 1913.

The line connected Tupper Lake, New York, in the Adirondack Mountains, with Ottawa and crossed the St. Lawrence River near Cornwall. Rail traffic on the line between Cornwall and Ottawa ended in 1957. There were also stations in Finch, Crysler, St-Albert, and the village of Russell.