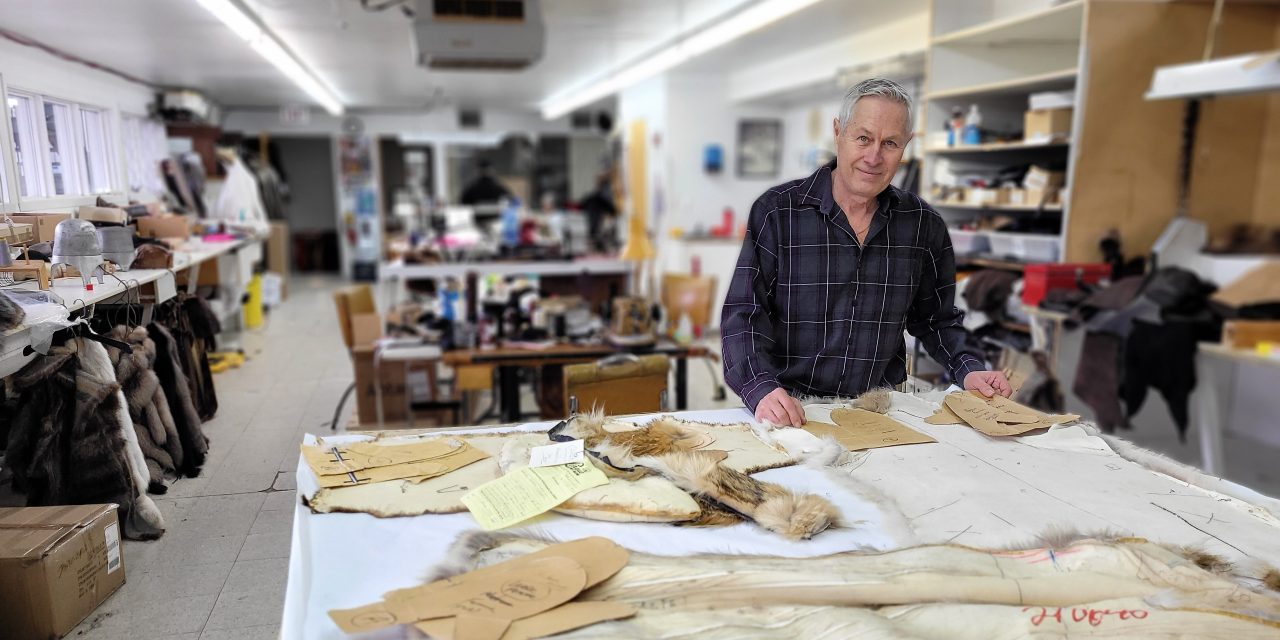 Jean-Yves Levaque in his happy place – the workshop in the back of his family store, where he has worked as a furrier for the past 45 years. When the business closes on May 31, the table will be coming home with him. Photo: Reid Masson

It is a time of mixed emotions for Jean-Yves Levaque. On May 31, the longtime owner of Boutique Levaque Furs in Hawkesbury will close the family business started by his parents 77 years ago.

“I just want to enjoy life,” says Levaque, of the reason he has decided to shut down the business he has worked at for more than four decades. “I still love it, I just want to take care of myself now.”

Jean-Yves’ parents Raoul and Marie-Claude opened R. Levaque Furs in 1945 in a location on Main Street near what is now Restaurant Carole. The business, which offered custom fur coats and other products, as well as repairs and upgrades to furs, was an immediate success and soon Marie-Claude began offering her own wool products, both raw wool for knitting and finished items such as sweaters and mitts. The business expanded and moved to its current location at 677 Main Street East in Hawkesbury in the mid 1950s, with the furrier operation located at its present location and Marie-Claude’s wool store where the boutique is currently.

As they grew older, the couple’s children began to work alongside their parents. His older brother Jean-Francois and sister Danielle were already working there when Jean-Yves sewed his first fur in 1975.

“I started sewing fur (when) I was 17,” recalls Levaque, who immediately realized he possessed a natural ability for the work. “I knew I had it, so I continued on this and my brother was the salesman and I was the repairman in the back shop.”

Changing with the times

Jean-Yves worked alongside his father for seven years, taking over full control of the fur operations along with his brother Jean-Francois when Raoul passed away in 1982. His mother Marie-Claude continued to sell wool for knitting and Levaque’s own wool clothing, however the wool business began to slow down. The fur business was also in decline, so Levaque began to move into selling sportswear.

“That’s when we started with Patagonia and then Columbia and Sierra Design – all those brand names,” Jean-Yves says. 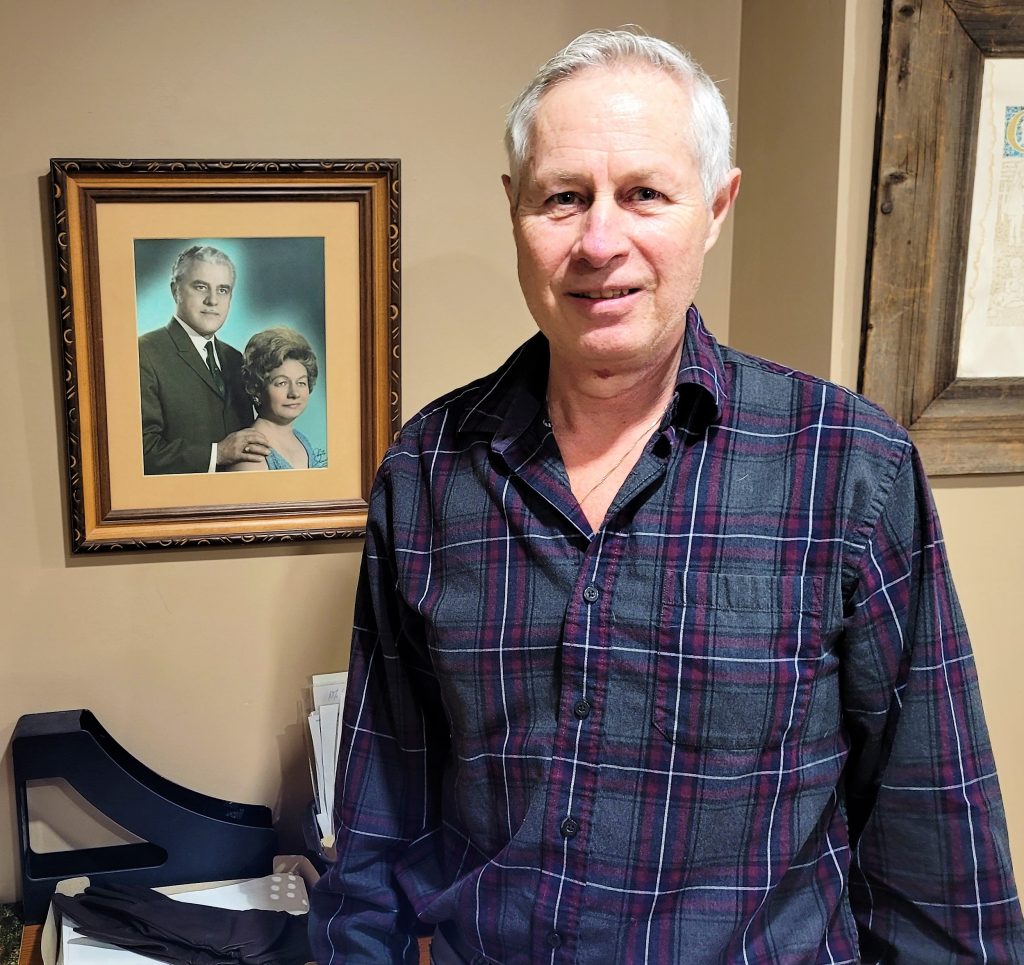 Jean-Yves Levaque with a photo of his parents Raoul and Marie-Claude, who started R. Levaque Furs in 1945. Photo: Reid Masson

His sisters Danielle and Sergine operated the boutique side for more than 20 years and Jean-Yves and his brother continued to operate the fur side, with Jean-Yves running the large shop in the back of the store, where he and a team performed repairs and created new designs.

“We used to be a lot of people, because we used to do at least 100 remodels a year, plus 700-800 small jobs,” Jean-Yves remembers. “New collar, new sleeves, bigger coat, gained weight, lost weight, want it shorter – whatever the customer wants.”

Through Levaque Furs he has created literally thousands of designs and new fur products over the years. Levaque’s also has given new life to coats and other fur products that were in need of repairs or alterations.

Fur industry has had ups and downs

In addition to his late father Raoul, Jean-Yves worked alongside three different fur cutters over the years, learning the furrier trade from each of them.

“First from my father then from those experts.” Jean-Yves says, adding he still loves the trade. “I was born in this (industry). It’s had it’s ups and downs, like any other fashion, but we’ve survived them all.”

Today, his wife Sylvie is the only other employee in the large fur shop behind the store. There used to be seven workers in the back shop, including two finishers, but as the fur industry continued to decline, Jean-Yves decided to take on all of the jobs in the back shop himself.

“Now it’s only me and Sylvie. She does the hand finishing and I do the rest.”

The dedicated furrier is not swayed by negativity about the fur industry, noting the fur trade is a huge part of Canadian history.

“Canada started with the exchange of fur – the first bank opened to finance the fur industry,” Jean-Yves says proudly. “It’s part of the history of our country.”

The building which houses Boutique Levaque Furs and several residential units was sold last year. While the fur operation will close on May 31, Jean-Yves, who bought out his brother Jean-Francois in 2007, remains hopeful that someone might step up at the last minute and take over the boutique portion of the business.

“I’m not happy about closing down and removing the name from the building,” says Jean-Yves, who will continue to do furrier work at home. “If someone approached me before the end, they could continue.”

“Whoever wants to buy the rest can continue Patagonia and keep only one side and rent it. There’s a market. You open the door in the morning and people come in. The name is there.”

Jean-Yves says he strongly considered carrying on, but made the decision to retire for the sake of his health. He and Sylvie also want to do things they have not been able to do while running a business six days a week.

“(I want to) enjoy life – fishing, hunting, four wheeling,” he says. “Probably, if we can travel – I’d like to go down south in the wintertime.”

As for his own future in the fur business he loves?

“I’ll probably be leaving with 150 coats on my shoulders and bring them home to recycle them.”

Levaque says over the years what has made him most happy is the gratitude of customers. He’s also extremely proud of the family heirlooms he and the team at Levaque Furs were able to save or re-purpose.

“You can’t imagine how many women have come in here and told me the story of their coats – it has sentimental value and they don’t want to throw it away, they don’t want to sell it,” he says. “They want to bring it back to the family in another way – either in Teddies (bears), cushions, throws.”

Thank you to customers, family and staff

The memories of his time working and running Boutique Levaque Furs are still fresh, and the store’s owner is extremely appreciative of everyone who contributed to its success.

“I want to thank all of our customers for all of those years. I want to thank my family,” says Jean-Yves, who also expressed his gratitude to staff. “We had good employees.”

The historic store’s owner had special praise for long-time employee Diane Lortie, who has worked at Boutique Levaque for 36 years.

“She’s a pearl – the best employee a person could hire,” he enthuses.

“It became a family for me,” says Lortie, who says she will greatly miss her regular customers and meeting new people, but hopes to be able to spend more time with her grandchildren.

Jean-Yves Levaque says he is most grateful to his parents for leading him into a career he truly enjoyed.

“My father let me go,” Jean-Yves reminisces. “He’d say ‘try the machine’, so I did and it worked.”

“I had just finished my Grade 12 and I was ready to go to college or university – I didn’t know what to do in life. It happened that I sat down on a machine and it worked for me. It’s like a magician, you know if you have it or not.” 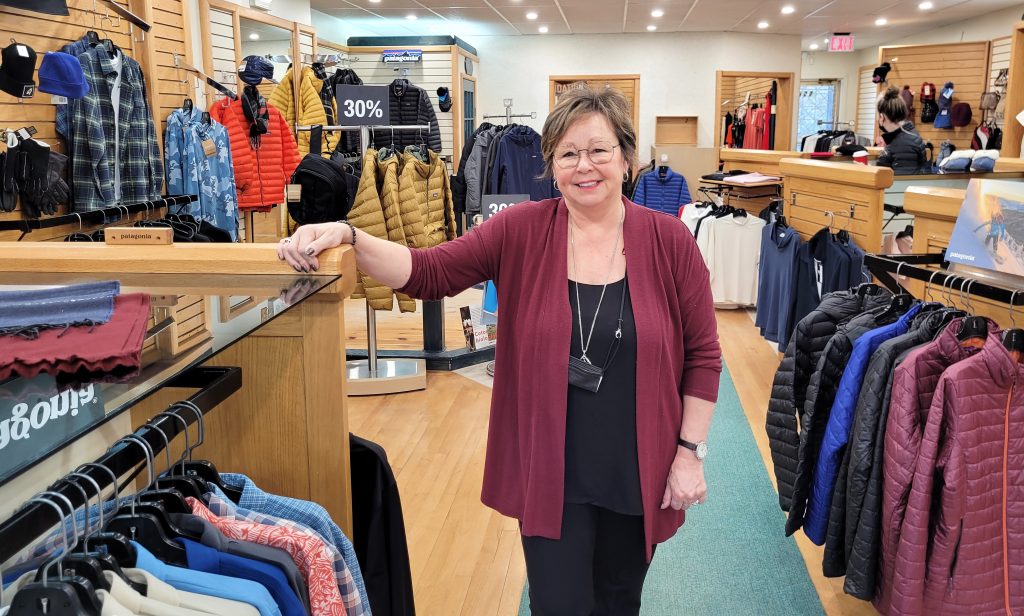 Diane Lortie has worked at Boutique Levaque for 36 years. “It became a family for me,” she says. Photo: Reid Masson 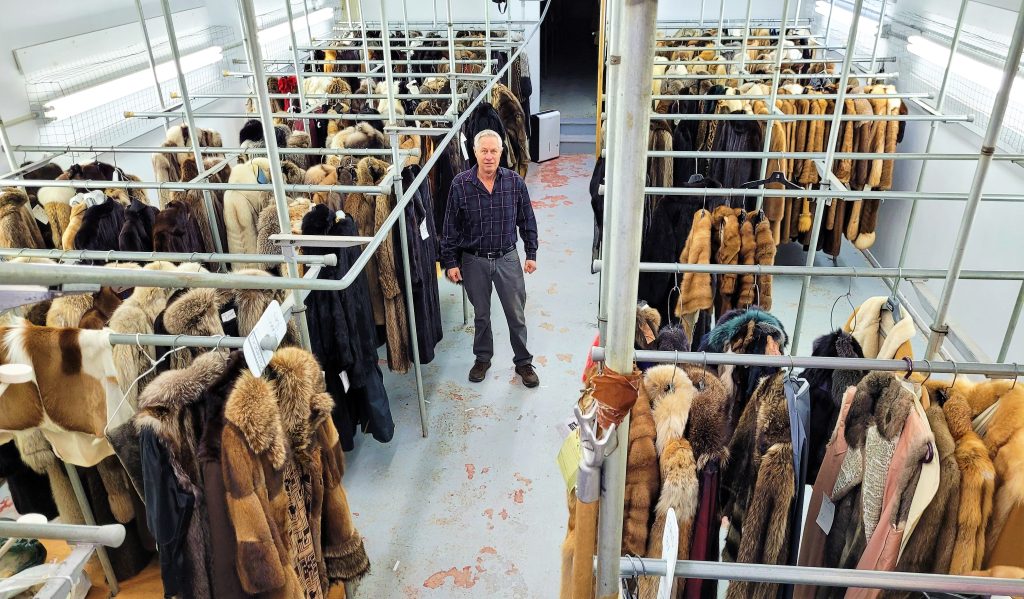 Jean-Yves Levaque stands in one of the two huge fur storage units inside Boutique Levaque Furs. Made of two-foot thick reinforced concrete walls and with safe doors, the refrigerated units provided safe storage for customers of the store. They used to be full, but with the store closing at the end of May, all that remains are items that Jean-Yves uses for parts and to convert into smaller items. Photo: Reid Masson