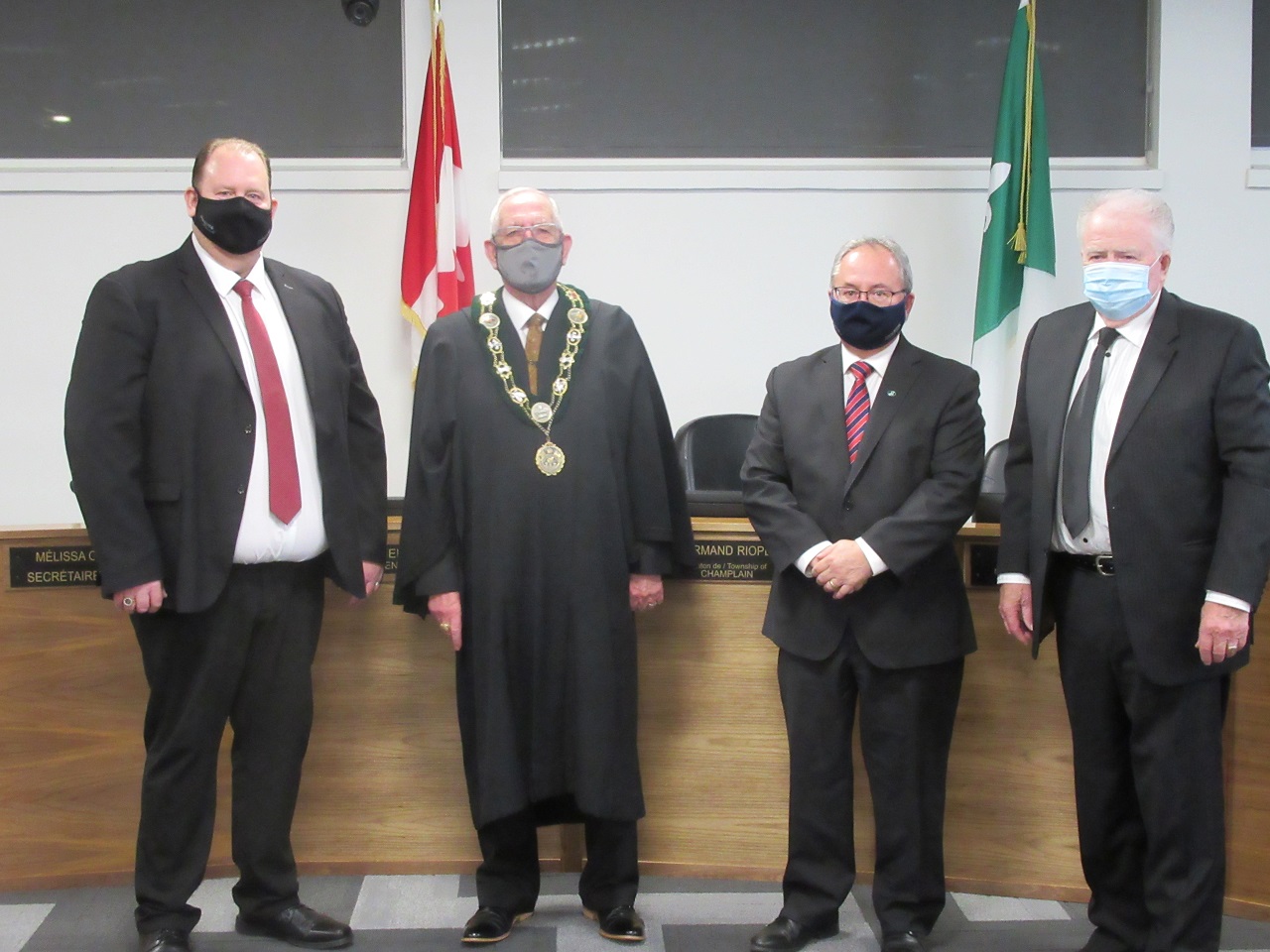 The Mayor of Casselman will preside as Warden of the United Counties of Prescott and Russell (UCPR) for 2022. Daniel Lafleur was sworn in as Warden at the inaugural meeting on December 15.

Lafleur had been nominated by La Nation Mayor François St-Amour and East Hawkesbury Mayor Robert Kirby. There were 20 people in the audience at the UCPR administration building in L’Orignal. Attendance was reduced due to pandemic capacity regulations and a freezing rainstorm, which made driving difficult.

In his inaugural address, Lafleur expressed appreciation for the leadership of 2021 Warden, Alfred and Plantagenet Mayor Stéphane Sarrazin.

“You have shown great leadership through this difficult time, and I sincerely thank you from the bottom of my heart,” Lafleur said of his predecessor.

Among priorities for 2022, Lafleur specifically mentioned continuing efforts to complete the new Prescott-Russell Residence long-term care facility. Construction on the 224-bed, $90 million facility on Spence Avenue in Hawkesbury began in March 2021. Completion is projected by the end of 2023, with the first residents relocating during the second quarter of 2024 from the existing residence on Cartier Boulevard in Hawkesbury.

Lafleur said implementation of the UCPR’s Community Safety and Well-being Plan is an important project that the counties must plan for in the months ahead. The Ontario government has mandated all regional and municipal governments to develop these plans as a way of best addressing law enforcement needs in the context of sociological issues.

“This is most crucial for our most vulnerable communities,” Lafleur noted.

Referring to economic development, Lafleur said the UCPR will continue to focus on job creation, opportunities, and entrepreneurship. He also mentioned expansion of natural gas service across the counties as a priority. Lafleur said it is essential for the UCPR to work with neighbouring regional and city governments.

“We must work with SD & G council, Ottawa, and all other Eastern Ontario counties to advance issues of concern.”

After a career in business, Lafleur was elected Mayor of Casselman in 2018.

During the inaugural meeting, outgoing Warden Sarrazin continued the custom of the warden donating funds raised at the Warden’s Golf Tournament and Warden’s Banquet to a series of community organizations.  This year, a total of $18,500 was contributed to eight organizations. Sarrazin chose to donate $2,500 to the Prescott-Russell Autism Group, $2,500 to the Youth Softball League of the Wendover Optimist Club, $2,500 to Soccer Pro17, $2,500 to the 58th Fournier Scouts, $2,500 to Pumas Volleyball, $2,000 to the Snowsuits initiative of the Alfred Optimist Club, $2,000 to the 2804 Royal Canadian Army Cadets of Casselman, and $2,000 to the Clarence-Rockland Ringette Association. The 2021 Warden’s Golf Tournament was held in August and the Warden’s Banque took place in November.