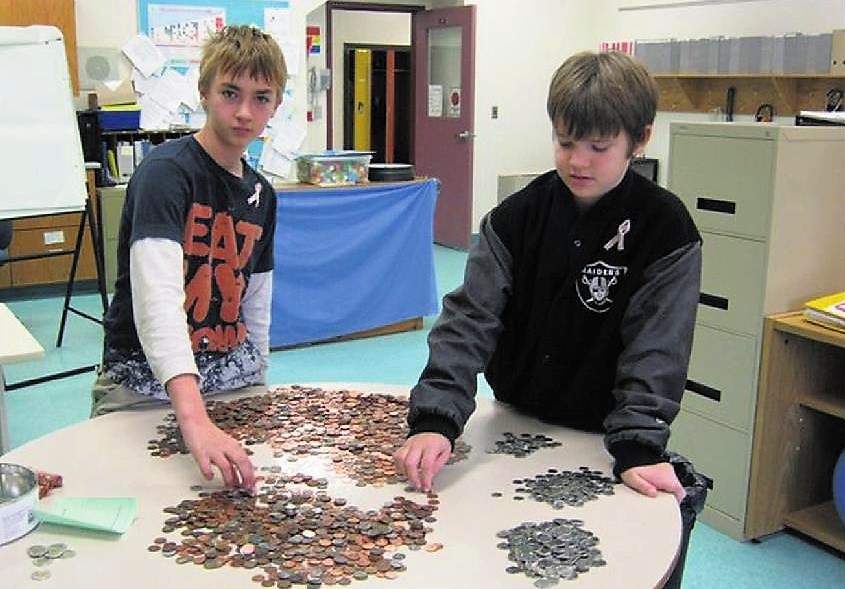 From The Review, December 8, 2011 – After finding out his grandmother had cancer, William Kozlowski (right), a Grade 5 student at Plantagenet Public School, started a campaign to raise money for cancer. He encouraged his classmates to make posters to promote the event and went around the school every morning to collect loose change. He chose a friend, Kennith Down (left) to help him count the money and was very pleased to have raised more than $150. REVIEW ARCHIVE PHOTO

10 Years ago
Accusations abound at GSLR council table
The Review, December 15, 2011 – GRENVILLE-SUR-LA-ROUGE – All is not well at the Grenville-sur-la-Rouge municipal council table. Strong-headed political mentalities are at odds over the roles, responsibilities and amount of power that each member of council, including the mayor, should have. The rift became clear after a special meeting was boycotted by four council members on November 22 and again on November 24. Only Mayor John Saywell, and councillors Daniel Gauthier and Teresa Ogle-Foreman were present.

25 Years Ago
10 months for Cadillac joyride
The Review, December 11, 1996 – HAWKESBURY – A St-Eugéne man has been sentenced to 10 months in jail, after a car was stolen in Hawkesbury last Saturday. The theft occurred after the owner of the car left it running in front of the Desjardins convenience store on Main Street. During the joyride, the thief picked up a female passenger and then led police on a brief chase through the snow-covered streets. After careening westward along Lansdowne Street and going through a stop sign on Cameron, the car spun out of control, stopping on a lawn. The man pleaded guilty to impaired driving, dangerous driving, auto theft and operating a vehicle while disqualified.

75 Years Ago
Ottawa Flying Club visits Hawkesbury
The Review, December 12, 1946 – HAWKESBURY – Members of the Ottawa Flying Club paid a recent visit to Hawkesbury, where they were guests of the Hawkesbury Flying Club. The get together was so successful, it may be considered as the forerunner of many more aerial jaunts to Hawkesbury. Hawkesbury Airport, home of the flying club, is conveniently located right on Highway No. 17, just a mile and a half west of the town and it is certainly an ideal site for a flying club.

100 Years Ago
Riverest to become entertainment site
The Review, December 9, 1921 – L’ORIGNAL – ‘Riverest’ is the appropriate name given to that fine old mansion, recently acquired by Mr. and Mrs. Walter Kirby from the Hall Estate. The property is beautifully situated, overlooking the Ottawa River and with its quaintness and spaciousness makes it ideal for the purpose the proprietors have in view – that of conducting a homelike stopping place ‘Road House’, for the convenience of motorists and weekend parties, private entertainment and the like.

125 Years Ago
Fox hunter shoots neighbour’s dog
The Review, December, 1896 – VANKLEEK HILL – An accident happened to an old hunter on Saturday. As he was hunting along the edge of a thicket he saw what he supposed to be a red fox, but after he pulled the trigger, to his surprise, upon examination it was his neighbour’s dog. Old hunter offered $5, but greedy neighbour wanted $25. If the parties had been Irish it would be ‘sure and Pat we will fix it all right’.