Hawks move into second place with wins over Nepean and Rockland 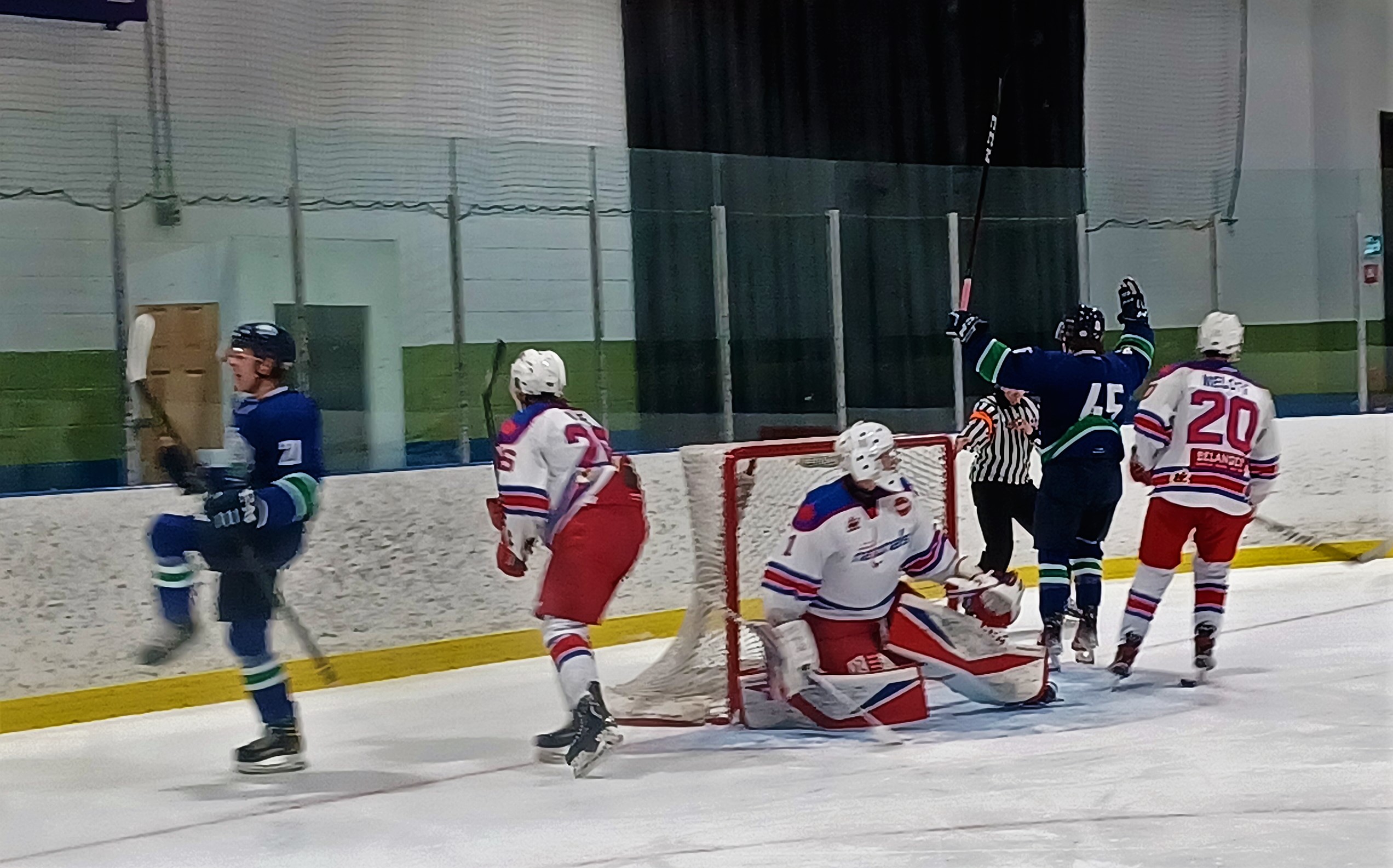 Hawks forwards Jakson Kirk (21) and Jeremy Tremblay celebrate Kirk’s first goal against the Rockland Nationals on Friday, November 5. The Hawks jumped out to a 3-0 lead in the first 10 minutes of the game on their way to a 6-3 victory. Photo: James Morgan

The Hawkesbury Hawks continued their stellar play last weekend, moving up in the Central Canada Hockey League (CCHL) standings with solid wins over Nepean and Rockland.

The Hawks moved into second place in the CCHL’s Yzerman Division standings after the pair of wins, and now sport an record of 11 wins and five losses, to trail only the Ottawa Junior Senators in the division. It has been a remarkable turnaround for the Hawkesbury squad, which began the 2021-2022 season with three straight losses.

The Hawks were full value for their 6-1 road win over the Nepean Raiders on Sunday, November 7, with leads of 1-0 and 4-0 after the first and second periods. Michael Andrews scored two goals for the Hawks, including the winner, while Tyler Samodral, Bradley Horner, Jeremy Quesnel and Landon Brownlee added singles.

Hawkesbury netminder Dimitri Pelekos stopped 22 of the 23 shots he faced to earn the victory – beaten only on a penalty shot late in the third period. Andrews and Samodral were named the game’s first two stars.

Hawks head coach Rick Dorval was pleased with the efforts from his charges, noting the only disappointment was the late goal allowed on a penalty shot – the second penalty shot goal scored by the team’s opponents in two games.

“Two uncharacteristic plays by our defence and you pay for it,” Dorval said. “It was a little bit disappointing on Sunday, because I felt like Pelekos had played well enough to deserve a shutout.”

On Friday evening, November 5, the Hawks jumped on the Rockland Nationals early, scoring three goals in the first 10 minutes of the game, as Hawkesbury cruised to a 6-3 victory in front of the home crowd at the Robert Hartley Sports Complex. Jason Kirk fired home the first two goals of the game, with Landon Brownlee then staking the Hawks to a 3-0 lead after the first period.

The Nationals made a game of it with two markers in the second to enter the final period down only 3-2, before the William Gendron, Rylee Hlusiak, and Jakson Kirk salted it away for the home team with three straight goals in the third. Max Donoso stopped 24 of 27 shots on the Hawkesbury goal, with the final goal scored against him on a penalty shot late in the third period when the game was well in hand for the home team.

“It felt like we got a bit complacent in the second (period) against Rockland – you can’t do that at this level,” said Dorval, who was pleased to see the Hawks players right the ship once they took to the ice for the third. “We talked about it between periods and obviously we came out a lot better in the third period.”

The Hawks have a busy week upcoming, with three games in five days, beginning with a home date against the Navan Grads this Friday, November 12. Game time is 7:30 p.m. Hawkesbury will then travel to Renfrew to face the Wolves on Saturday, November 13, at 7:30 p.m.

The Hawks will host a rare Tuesday night game at the Robert Hartley Sports Complex when they face the Kemptville 73’s in a match that starts at 7:30 p.m.

The three games will be a tough test for the Hawks, as all of the teams they are facing have winning records similar to the Hawkesbury squad.