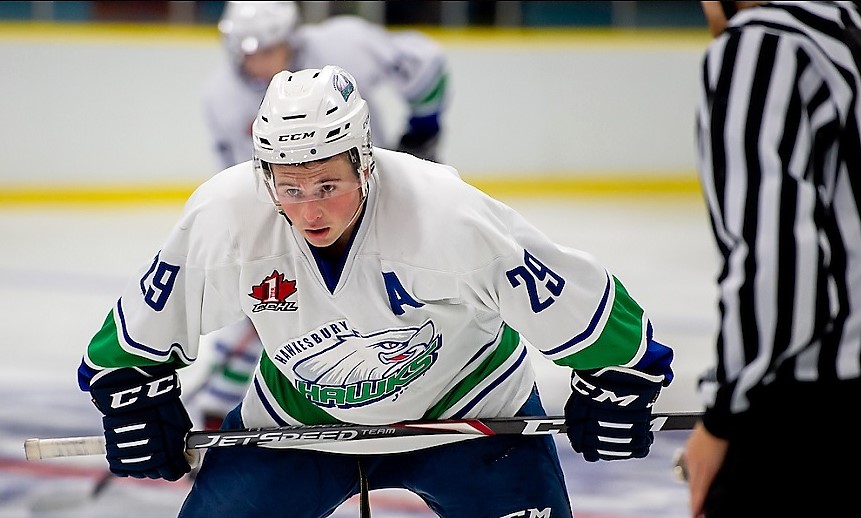 Hawks forward Josh Spratt takes a faceoff during the Central Canada Hockey League’s Fall Showcase last weekend at the Bells Sensplex in Kanata. The Hawks won all three of their games during the showcase. Photo courtesy CCHL

The Hawkesbury Hawks extended their winning streak to five games and forward Rylee Hlusiak notched two hat tricks, as the local squad swept all three of its games at the Central Canada Hockey League’s Fall Showcase at the Bell Sensplex in Kanata last weekend.

“We had some success, so that’s good,” said Hawks Head Coach Rick Dorval. “It was a team effort from top to bottom – the guys played hard.”

Hlusiak scored all three goals, while Max Donoso pitched a 20-save shutout in his debut, as the Hawks knocked off the Rockland Nationals in their opening game of the showcase on Saturday, October 9. On Sunday, Hlusiak again fired home three goals for the second straight game, as the Hawks defeated the Smiths Falls Bears 6-2. Willyam Gendron, Eric Chamady and Michael Andrews also scored for Hawkesbury, while Dmitri Pelekos stopped 14 shots for the win.

Donoso was back between the pipes again on Monday, October 11, stopping 31 of 32 shots as the Hawks held off a comeback by the Brockville Braves to win 2-1. Hlusiak scored his seventh goal of the showcase, including the game-winner, Ryan Murphy scored his first career CCHL goal.

With seven goals in three games, Hlusiak was one of the stars of the weekend, and the scouts in the stands took notice.

“(Hlusiak) got a little bit of attention – and by a little bit, I mean a lot,” said Dorval of the interest shown in the Hawks forward by scouts.

Goaltender Donoso, on loan for the season from the Ottawa 67s, was outstanding during the tournament and has provided the Hawks with a solid No. 1 goaltender. Dorval said all of the new and returning players who joined the team last week also provided a big boost for the club.

The three wins over the weekend moved the Hawks up into third place in the CCHL’s Yzerman Division with a record of 5-3. It’s been a big turnaround for the Hawks, who opened the season by losing their first three games, before starting their current five-game winning streak.

The Hawks return to the Robert Hartley Sports Complex this Friday, October 15, to face off against the Pembroke Lumber Kings in an evening start at 7:30 p.m. On Sunday, October 17, the Hawks visit Nepean to face the Raiders.