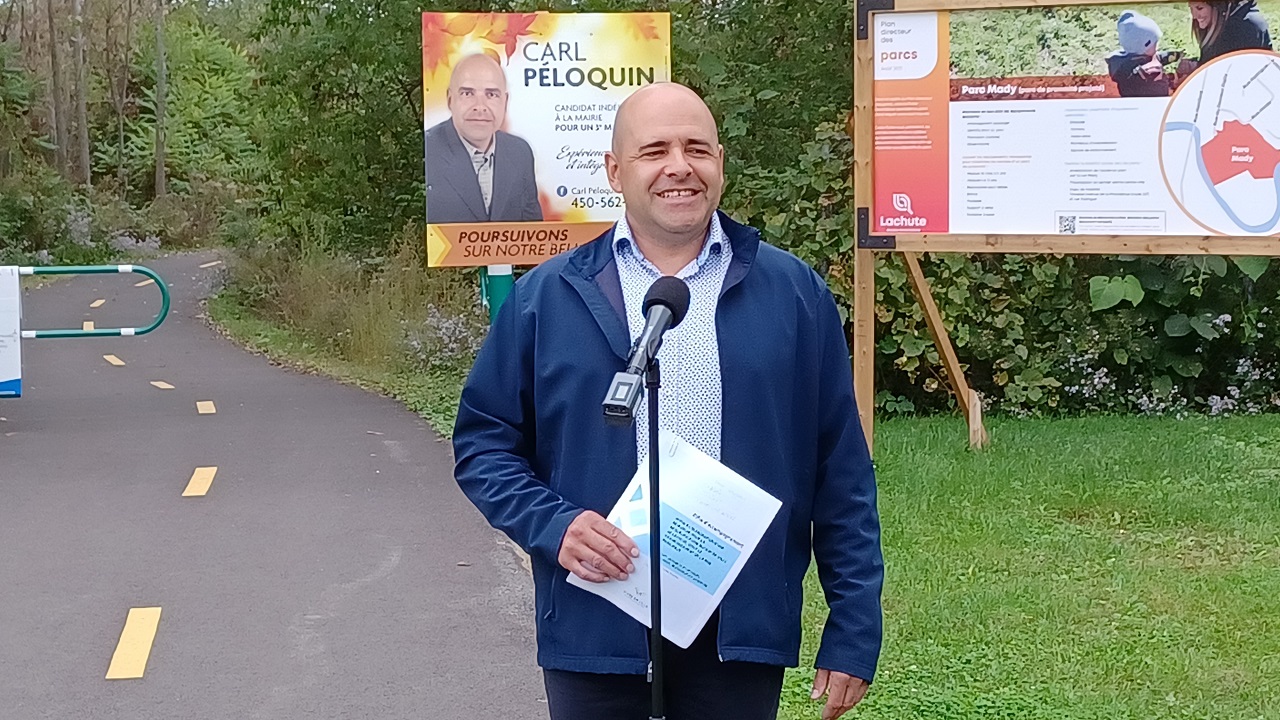 Carl Péloquin is running for a third term as mayor of Lachute. Photo: James Morgan

Lachute’s incumbent mayor is seeking a third term in the municipal election scheduled for November 7.

On September 27, Carl Péloquin announced his candidacy by the new recreational path at Parc Mady – a project he highlighted as one of his achievements as mayor.

“We had a productive mandate,” Péloquin said, noting achievements made during his mandate despite challenges such as the flooding along Rivière-du-nord, which affected the municipality in the spring of 2019.

Under Péloquin’s leadership, Lachute has experienced industrial and residential growth. He said improvements to the Hydro-Québec grid are still necessary in order to ensure there is adequate service to facilitate more industrial growth in town.

“We have worked hard on that file here,” the incumbent mayor said.

Recycling and material recovery has been a major part of Péloquin’s economic program as mayor. He promoted the role of the Tricentris recycling plant in putting waste products to better use.

“This is a great example of the circular economy where we live,” he noted.

Péloquin highlighted the residential growth Lachute is experiencing and the efforts his administration has made to ensure new developments integrate well with existing neighbourhoods in terms of appearance and density.

Lachute’s public library was to be relocated to the former United Church building on rue Principale in 2018. However, the project has faced several delays, due to unexpected costs and additional needs in renovating the historic building. Crews have recently been working on the building’s roof, and Péloquin said it will be finished soon.

Péloquin said the age of the building and cost of materials have been a significant factor in the delay.

“We lost a year there,” the mayor said. “We’re trying to keep the cost as low as possible.”

Péloquin is running as an independent candidate and is being challenged by Bernard Bigras-Denis, Leader of the Vision Lachute party, which also has a complete slate of candidates for council seats. Péloquin said he does not believe that Lachute needs municipal political parties.

“In a town the size of Lachute, I don’t think it’s necessary to form teams,” he explained.

Péloquin is confident there are enough independent candidates for council to support his agenda, if he is re-elected.

“I think I have always worked well with other councillors,” he said.