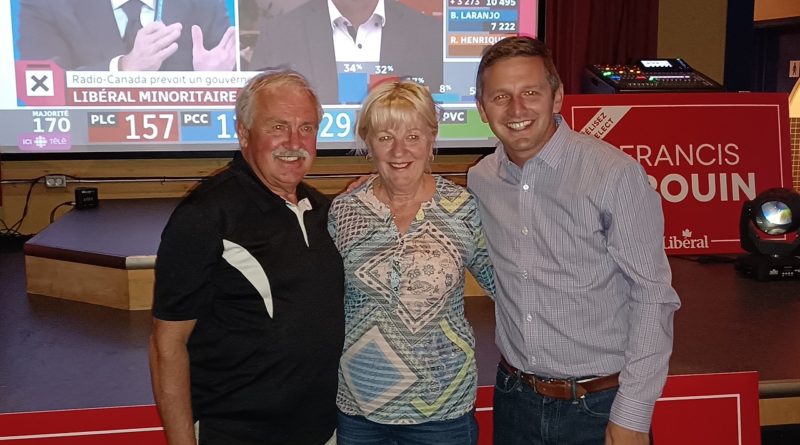 Glengarry-Prescott-Russell will again have a Liberal Member of Parliament in Ottawa. Liberal candidate Francis Drouin was re-elected on Monday, September 20.

Independent candidate The Joker, whose real identity was never publicly revealed during the campaign, received 207 votes which was 0.5 per cent of the popular vote.

“I’m too tired to be excited,” Drouin told The Review in an interview at Déjà-Vu Resto-Bar in his hometown of Hawkesbury on election night. Now that the campaign is over, he is looking forward to spending time with his wife Kate Forrest and their two-year-old son.

Drouin said he will continue to represent every resident of the riding, whether or not they like him, his party, or Leader Justin Trudeau.

“It’s always about having that conversation with people.”

Drouin acknowledged the vocal PPC support that was evident across the riding during the campaign.

“These conversations have to be based on reason and rational thought,” he commented.

Nationwide, the Liberal party was re-elected with a minority government. The last time Canadians elected consecutive Liberal minority governments was in 1965 under Lester Pearson. As for the possibility of Drouin having a greater role in the Liberal caucus or possibly being given a cabinet position, he said the first priority is his riding.

When asked about the future of Justin Trudeau’s leadership of the Liberals after failing to secure a majority government, Drouin said there will likely be a period of reflection on the future of party leadership among caucus members.

Addressing challenges involving local access to labour is an issue Drouin is planning to focus on, now that he has been re-elected. He is planning to establish a panel of representatives from business, labour, employment organizations and local governments from across the riding to discuss the situation and propose solutions.

“It’s about connecting employers with employees.”

Drouin said the participation of more stakeholders will help establish solutions to the situation.