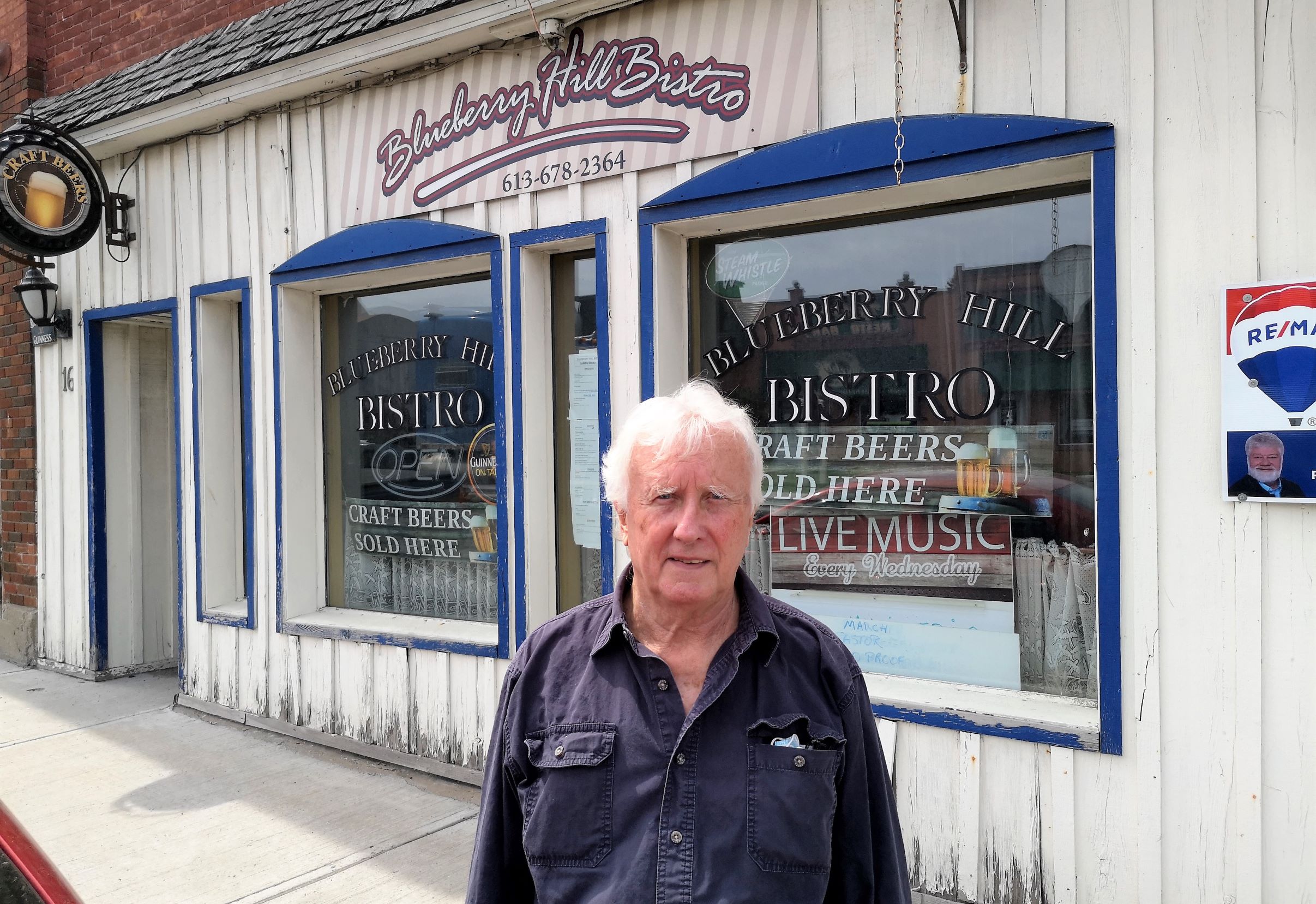 Owner Chris Williams in front of Blueberry Hill Bistro in Vankleek Hill. Williams, who will be relisting the building for sale once minor repairs are completed, hopes the pub’s new owners will continue to host live music. Photo by Reid Masson

It’s a question many music lovers, musicians and diners in Vankleek Hill have been asking for the past year – what is happening with Blueberry Hill Bistro?

The popular local pub, which featured live music on Wednesday evenings and Sunday afternoons, was forced to shut down in March of 2020 at the beginning of the COVID-19 pandemic. Blueberry Hill – which Williams had put up for sale just two months earlier – was never reopened, as the small, intimate setting could not conform to Ontario’s COVID-19 social distancing regulations.

“I had put the bistro for sale just a couple of months before COVID and we even got an offer,” recalls owner Chris Williams. “But then COVID came along and they said ‘oh-oh, not a good time’, so they pulled out just a week before the closing date.”

Blueberry Hill Bistro officially opened its doors as an authentic British pub in February of 2006. While open-mic music nights were part of the plan, the owner says he did not initially envision how much live music would eventually contribute to the small pub’s success.

“We had no idea what was going to happen really,” Williams recalls. “My original idea was just to start a little pub.”

As local musicians began asking if they could play at Blueberry Hill, Williams started to host small live music nights. The evenings were so successful he decided to go all in, installing a professional sound system and acoustic studio tiles on the ceiling. From there live music performed by local musicians was a regular event on Wednesday evenings – becoming so popular that Sunday afternoons were soon added to the rotation.

Then COVID-19 hit, forcing Williams to make the decision to close the bistro in early March of 2020, the day before the pub’s annual St. Patrick’s Day party. At that point Blueberry Hill Bistro had already been tentatively sold. Williams was hoping to be able to reopen by May – even scheduling a final thank you party for the pub’s customers the week before the sale was to close – but those plans and the potential sale were both dashed as the pandemic continued.

“We realized it was impossible (to reopen) – we couldn’t do social distancing because (the pub) is too small,” Williams explains. “And all our money was made on Wednesdays and Sundays when we had the bands. But there were no bands (allowed), so we decided (to stay closed).”

What does the future hold for Blueberry Hill Bistro? The 78-year-old Williams says that decision will be up to someone else, as it is time for him to move on. He admits to already missing the staff, customers and live music.

“Of course I do – I enjoyed it very much,” says Williams, who does regret being unable to host a final goodbye for the pub’s staff and everyone who supported Blueberry. “I want to thank all of the customers who came – there’s really not much more I can do.”

Although not currently listed, Blueberry Hill Bistro is still for sale. The building requires some minor repairs, which will be done in the next few weeks, after which it will once again be on the market.

“Hopefully the person who buys it will continue with the music,” Williams says, noting that while he does not plan to reopen the Blueberry Hill himself, he is also not in a desperate rush to sell. “Once this (pandemic) is all over it will sell for sure.”

“Now would be a good time for somebody to buy it actually. It would give them time get it ready for when life gets back to normal.”