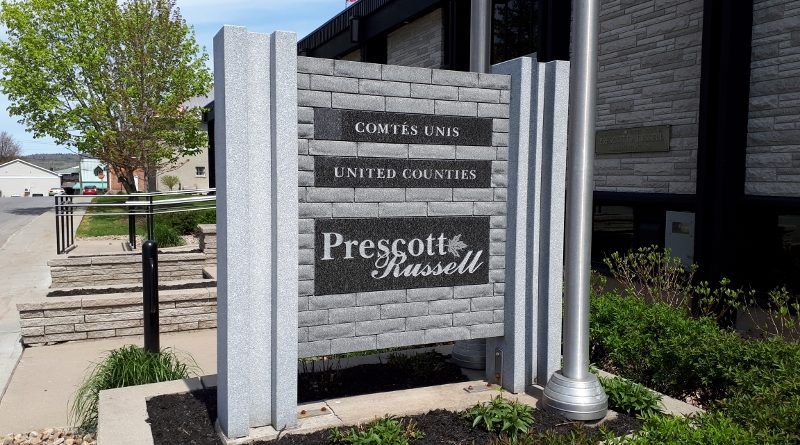 The United Counties of Prescott and Russell (UCPR) now has a Community Safety and Well-Being Plan.

UCPR council adopted the plan when it met on April 28.

Changes to Ontario’s Police Services Act in 2019 mandated every municipal or regional government to have a comprehensive plan in place, in order to ensure risks of social problems which can contribute to crime are lessened. These risks include – but are not limited to – poverty, challenges accessing health and social services, and domestic violence.

The UCPR Community Safety and Well-Being Plan is a 74-page document. According to a summary of the plan, it focuses on social development, prevention, risk intervention, and incident response. The UCPR, municipalities, and other social services organizations across the counties will act as partners and adapt their services to meet any needs identified under the plan.

Some of the topics the plan identifies as requiring attention include mental health, substance use, employment, housing, youth, seniors, and LGBTQ issues.

Before council approved the plan on April 28, Stephanie Gray and Jane Torrance – the consultants who assisted in the development of the plan – answered questions. In July 2019, UCPR council had approved hiring them to develop the plan at a cost of $20,340.

“I think it highlights the need for us to eliminate that silo mentality and work together as a team,” said Russell Township Mayor Pierre Leroux.

However, he did express concern about any financial implications the plan could have for the counties, especially to the Department of Social Services.

Chief Administrative Officer Stéphane Parisien said it was not yet apparent what the exact responsibilities of the UCPR will be for the administration and implementation of the plan.

Parisien said if the plan is managed by the counties, expenses could be covered by incorporating them into the annual tax levy, or by invoicing each municipality.

“Anything that does involve a cost will always come back to council for consideration,” Gray commented, adding “There hasn’t been a cost analysis per se.”

“When I look at this and I see the word ‘increase’ 178 times in the document, I’m going wow, there’s a potential for a large impact,” Leroux said.

Gray contended the plan could lead to efficiencies and streamlining of services.

Parisien said the UCPR would likely have to hire a coordinator to oversee the administration of the plan, because existing staff cannot accommodate the additional workload.

“I think it’s more something that’s going to be discussed at future budget meetings for the next year,” the UCPR Warden said.

East Hawkesbury Mayor Robert Kirby also said he would like to see more information about how much the implementation plan could end up costing.

“I think it’s good, but I’d also like to see some figures whenever possible,” said Kirby.

Sarrazin asked if each municipality will have to adopt an individual modification of the plan.

Gray and Torrance said due to the regional approach, individual municipal plans are likely unnecessary. They agreed with a suggestion by Hawkesbury Mayor Paula Assaly that each municipal council could adopt the UCPR Community Safety and Well-Being Plan as its own, if desired.