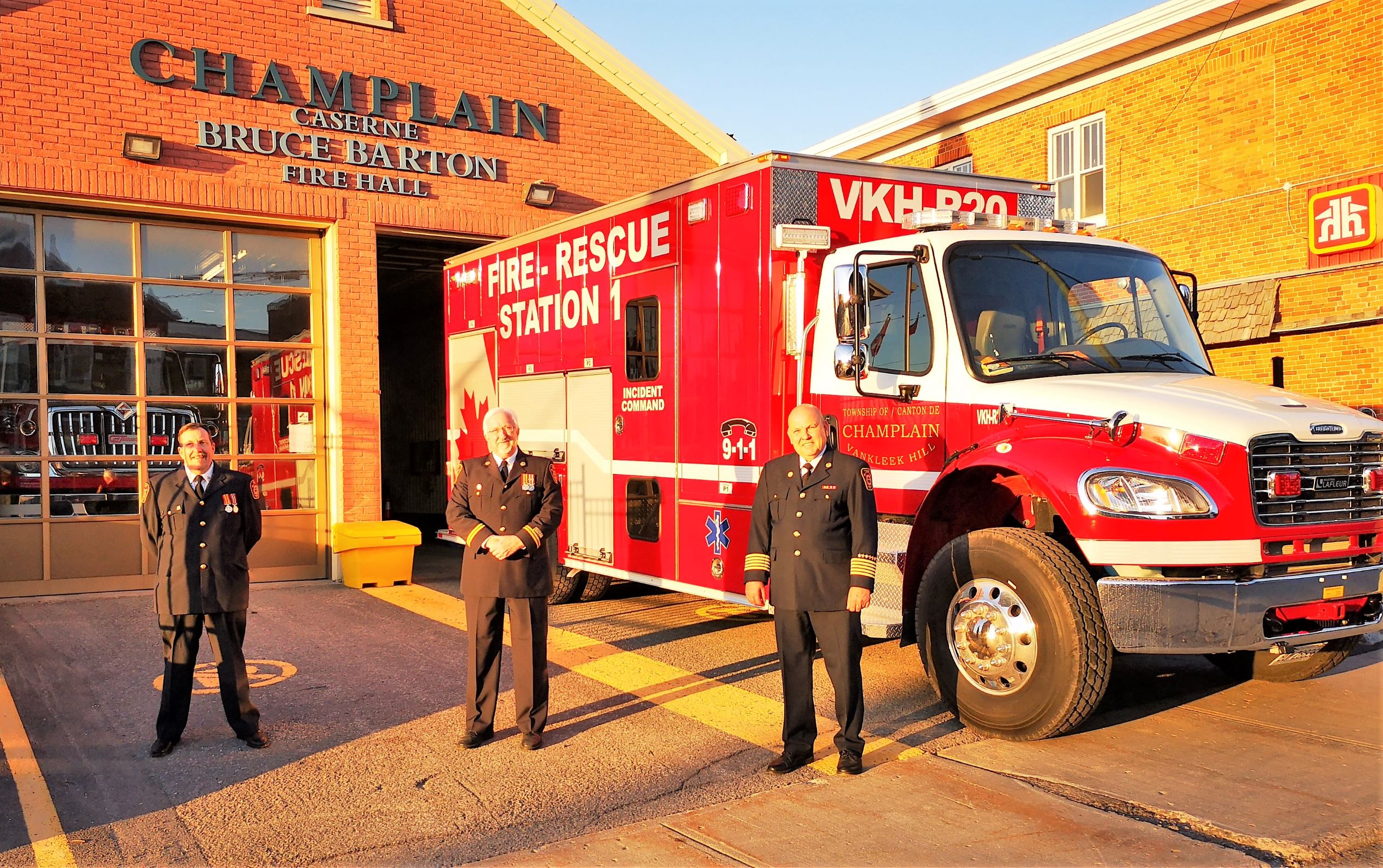 Ernie Roebuck admits there was a time when he had a fear of fire.

The 42-year veteran of the Vankleek Hill and Champlain fire departments, who retired from his position as Captain on March 12, says fear was a motivating factor which sparked his long career.

“Fire scared me when I was young,” Roebuck explains. “The only way to beat that fear is to face it head on.”

Born in Nova Scotia, Roebuck lived in New Brunswick and then Peterborough, before moving to Brownsburg and joining its fire department in 1975. He worked 18 months as a volunteer firefighter in Brownsburg, later accepting a job at Ivaco Rolling Mills and moving to Vankleek Hill.

Roebuck joined the Vankleek Hill Fire Department in early 1979, working under then chief Roland Martin. It was a different time and the small fire department was still relying on equipment and facilities from another era.

“When I started, it was with the old 1952 pumper truck and we hung our equipment on the side of the fire truck – that’s what I learned on,” recalls Roebuck. “We used to ride on the back – you can’t do that anymore.”

“Because it was a hopper roof, the steam got in there and it went ‘Poof’,” says the veteran firefighter, throwing his hands up in the air in an explosive gesture.

Not long after, in 1981, Roebuck and other Vankleek Hill firefighters were called to a large blaze at the Kandila Restaurant, which was on Main Street at the current location of the Bank of Nova Scotia. Firefighters were able to save the building from the massive fire, which Roebuck says occurred under suspicious circumstances.

Miracle no one was killed in “the explosion”

And then there was what Roebuck calls “the explosion”. On October 2, 2006, residents of the peaceful village were rocked when a private home in Vankleek Hill was obliterated at 10:30 a.m. from a blast later determined to have been caused by a natural gas leak. The explosion sparked a fire which also destroyed the house next door, and caused extensive damage to nearby homes.

“The house blew up and there was nothing left of it,” says the former fire captain somberly, describing the enormous sense of relief felt by firefighters when they discovered no one had been inside the home. “They had just left for work – it was a miracle no one was killed.”

His empathy for the victims of the blazes he has attended is palpable as he relates his stories. How has Roebuck been affected by witnessing so much tragedy during his 42 years as a firefighter?

“My heart bleeds for the people who lose (their homes) due to fires and explosions – it really hurts,” Roebuck says. “One of the main reasons I became a firefighter was because I cannot stand to see people experience loss.”

As he steps away from a lifetime of fighting fires, Roebuck says the things he will cherish the most are the relationships with his colleagues at the Vankleek Hill Fire Station and with the residents of the village. Teamwork and community support, he says, is what allowed the fire services in the village to grow from a small department using vintage equipment, to one which is respected by departments throughout Canada.

“I remember talking to a person from Rigaud and he saw our emblems on our jackets,” says Roebuck of an out-of-town training seminar. “He said ‘oh, you’re from Vankleek Hill’ – you’re known to be one of the top-trained volunteer departments in Eastern Ontario.”

Training and equipment improvements continued after the Vankleek Hill and L’Orignal stations became the Champlain Fire Department when the new municipality was created in 1998. The village acquired its first rescue van in 2001, which served two decades before it was replaced by a much larger and more modern unit last summer.

“We’ve done a lot of training,” says Roebuck. “The township would send guys to Gravenhurst fire college and they would in turn bring back what they learned to train us.”

“There was no absenteeism,” he says of the dedication to training and fellow colleagues. “It’s like a big family – you support each other.”

As Fire Captain in Vankleek Hill, Roebuck took on the responsibility of record-keeping and documentation for the fire department. Beginning in 2019, one of his final projects was to document the specifications for the Vankleek Hill Fire Station’s modern five-ton rescue van, which was delivered in July of 2020.

“That was one of my goals – to stay and see that through to the end,” says Roebuck, adding the acquisition of the rescue van was the perfect high note on which to retire. “It was a long process, but a very rewarding one.”

In his time as a Vankleek Hill firefighter, the outgoing Fire Captain served under three chiefs. Roland Martin was followed by long-time chief Bruce Barton, and then the current chief of the Vankleek Hill Station Michel Martin – who joined the Vankleek Hill department just five years after Roebuck.

“They’re all good people,” says Roebuck of his former bosses. “I’ve had an excellent relationship with Chief Martin.”

The current chief of the department obviously feels the same way, joking with his former fire captain as Roebuck, Martin and Deputy Chief Jeff Carkner arrive for a photo with the Vankleek Hill station’s new rescue van. “That jacket looks a little tight,” Martin kids his friend and former colleague.

“Oh he’ll be back (in his uniform) again,” Martin says, “We’re going to have a retirement party for him once we can.”

While he will miss his fellow firefighters, Roebuck says the time was right for him to step aside, for a number of reasons. He is very proud of what the department has accomplished over the years, naming several former colleagues who started as volunteers in Vankleek Hill and now work as full-time firefighters with larger departments.

Amazing support from the community

None of that would have been possible were it not for the wonderful community in which he has lived and worked for more than four decades, Roebuck says.

“The community in Vankleek Hill supported the fire department like you would not believe,” he emphasizes, citing numerous projects which were heavily funded by citizens. “I’m going to miss the involvement of the community – that was very gratifying.”

“To me Vankleek Hill is the cream of the crop – the community here is made up of people who care for each other. You don’t see that in other places like you do in Vankleek Hill.” 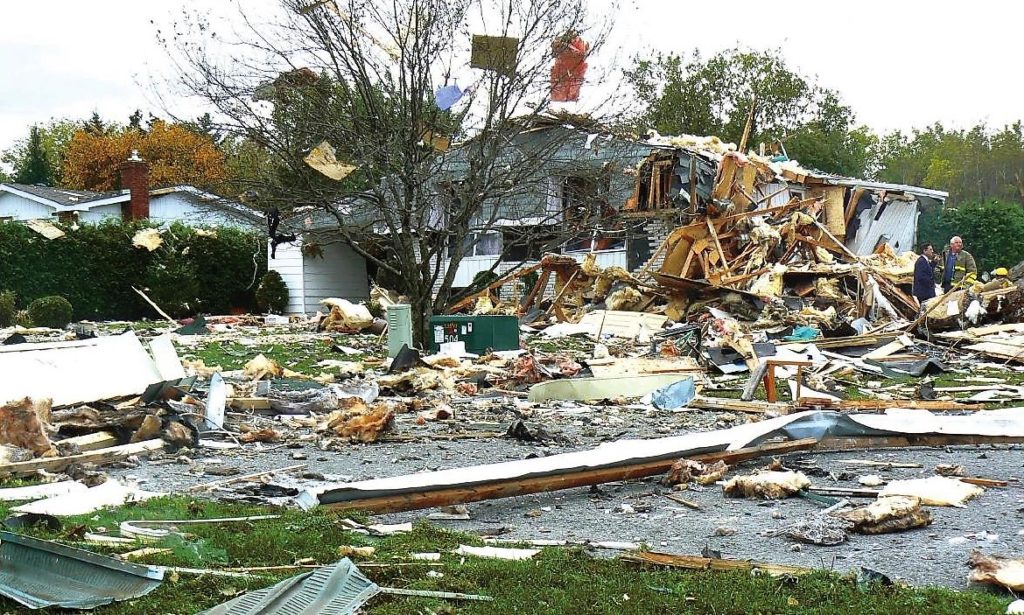 On the morning of October 2, 2006, residents of Vankleek Hill were startled by a blast which destroyed a private home in the village. Retiring fire captain Ernie Roebuck recalls the relief everyone felt when they learned that – miraculously – no one had been killed in “the explosion”. Review Archives photo 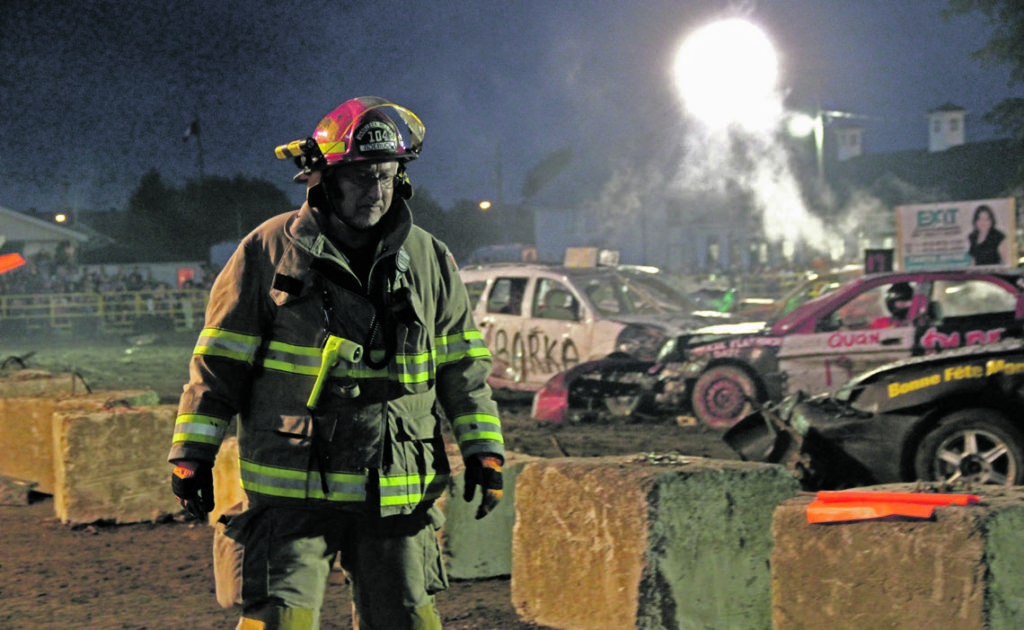