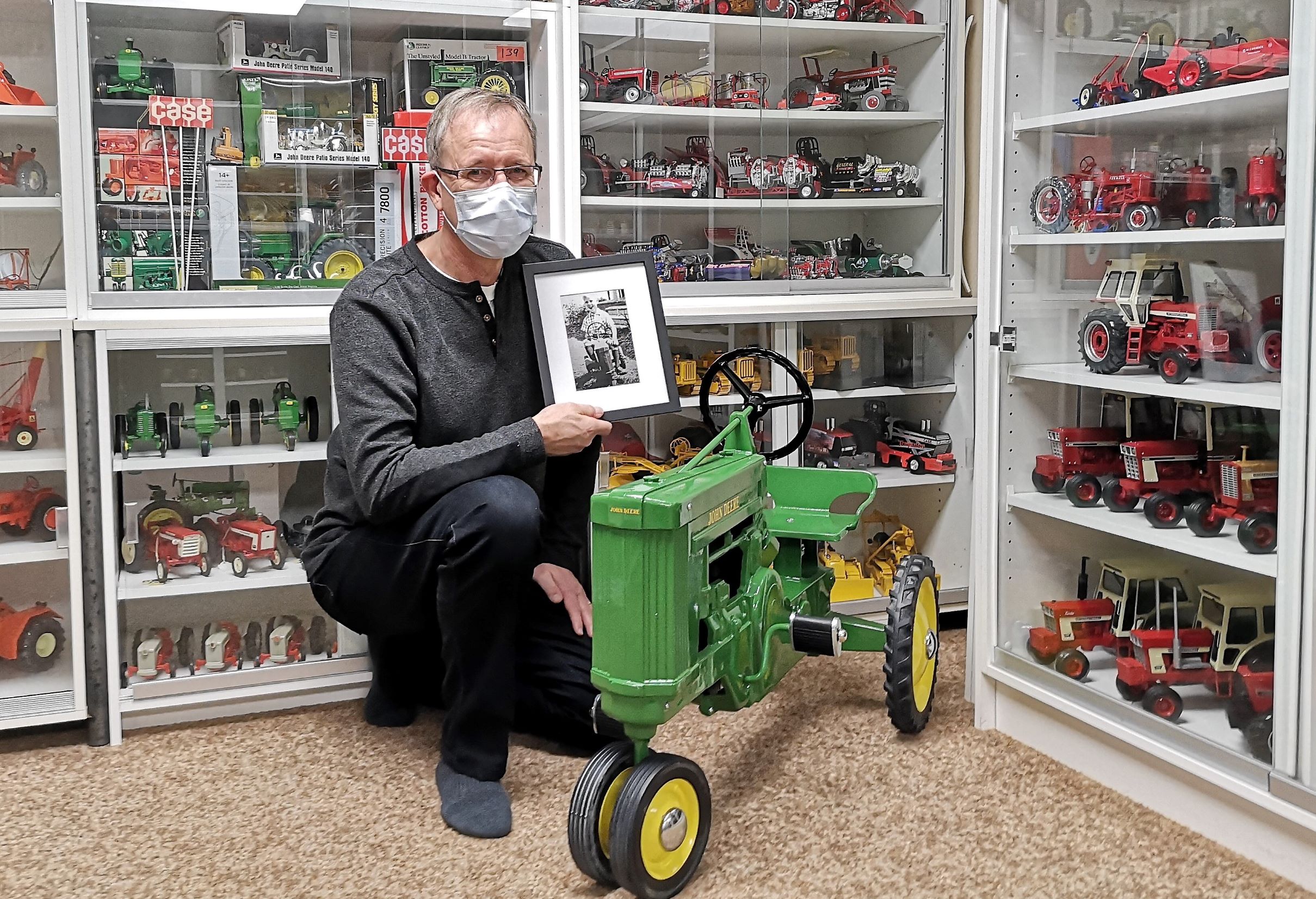 Dr. Ghislain Marleau with a photo of the John Deere pedal tractor given to him by his father Henri for his second birthday, alongside an identical one he found and restored two years ago. The gift, along with memories of toy tractors displayed in his father’s farm equipment dealership, were the inspiration for his massive toy tractor collection, which consists of more than 5,000 pieces. Photo by Reid Masson

Dr. Ghislain Marleau’s eyes become misty when asked about the inspiration for his massive collection of vintage toy tractors.

The Alexandria family physician was just a toddler in 1958, when his father Henri presented him the gift of a ride-on John Deere tractor. The owner of Marleau Garage in St. Bernardin and a John Deere farm equipment dealer, Henri had special-ordered the model for his son’s second birthday.

Tragically, the family patriarch would suddenly pass away just a few months after taking a photo of his young son riding on the new toy tractor. The day of his second birthday is one of the few memories Marleau has of Henri, but he also remembers his father’s special gift sparked an immediate interest in model tractors.

“You don’t have a lot of memories from when you were two years old, but I still remember going in the shop and seeing toy tractors on the shelf in my dad’s garage. I always thought that someday I’d like to collect them.”

After his father’s passing, Marleau Garage was operated by Ghislain’s older brother Reynald and his mother Angemai on a smaller scale – repairing cars and fixing farm equipment, but no longer selling new John Deere products.

Then, on March 24, 1962 – the day of Ghislain’s sixth birthday – the family was struck by a second tragedy, when both their home and Marleau Garage burned to the ground. The massive blaze took with it not only the buildings, but equipment, records, family pictures and the toy John Deere tractor Henri had given to his son exactly four years earlier.

Reynald had Marleau Garage rebuilt, reopening as a Case farm and industrial equipment dealership 1966. The addition of Case’s industrial line allowed the business to operate year-round, instead of only during farming season, and Ghislain began working at the garage after school and on weekends. The Vankleek Hill Collegiate Institute student was saving towards university, but he managed to find a few extra pennies to start a small collection of toy tractors.

In 1984, Marleau began work as a physician in the northern-Ontario town of Smooth Rock Falls. Out of school and with more disposable income, the young doctor would hunt for more 1/16th models whenever he could. Things snowballed quickly, and when he moved to Alexandria a year later to set up his own medical practice, the budding collector found himself carefully boxing up 150 various models of toy tractors.

Collecting toy tractors was fairly simple when Marleau first started, as most manufacturers would only release one or two scale models each year. But around 1990 that all changed, as the companies began to release miniature versions of almost everything they made.

“It’s like it was with hockey card collecting – all of a sudden there were 10 different companies making multiple sets per year and special editions,” explains Marleau, who has become more selective in his purchases – even selling off some pieces to save space. “Gradually I had to pick and choose, because you run out of room.”

Marleau now purchases only a few specialty items each year and has instead turned his focus towards models he has always wanted, but could never obtain. Already skilled at restorations, he began to modify existing models into other tractors which were never made as toys. From there he moved to building toys from scratch – working more than 3,000 hours on his first antique tractor, with a body formed from sheets of brass and tiny parts installed with the help of a magnifying glass.

Marleau built a second toy tractor, and then a third – each time finding ways to reduce the build time and refine his skills. By 2018 he felt ready to tackle his dream.

“My favorite tractor of all time is the Case Model 2470, but it was never made as a 1/16th toy,” says Marleau, who was able to obtain both an original operator’s manual and parts book, which allowed him to recreate the 2470 down to the finest detail. “It’s exactly like the full-size tractor – where there was a bolt, I’ve put bolts, where it was welded, I welded it.”

Six decades after his father started his love for toy tractors with a gift for his second birthday, Marleau’s collection finally came full circle. While attending a toy-tractor festival in St. Louis, Missouri, the avid collector suddenly found himself transformed back into a wide-eyed toddler, as he stood staring at a pile of parts.

“It was sitting on a bench, sandblasted and all apart,” recalls Marleau of what he immediately recognized as the exact model John Deere pedal tractor his father had given him in 1958. Although searching for years, he had only seen one like it before – on display in a museum and not for sale.

Within a month of bringing the parts home, Marleau had the pedal tractor fully assembled and painted in classic John Deere green. It is proudly displayed as one of the featured pieces in his collection, along with the Case 2470 and a replica of the Marleau Garage.

“I have five grandchildren and these are for them,” emphasizes Marleau, who took photos of both of his two-year-old grandsons posing on the tractor, just as he is in the black and white photo from his second birthday.

“This is all a labor of love not only for antique tractors, but for my family history.” 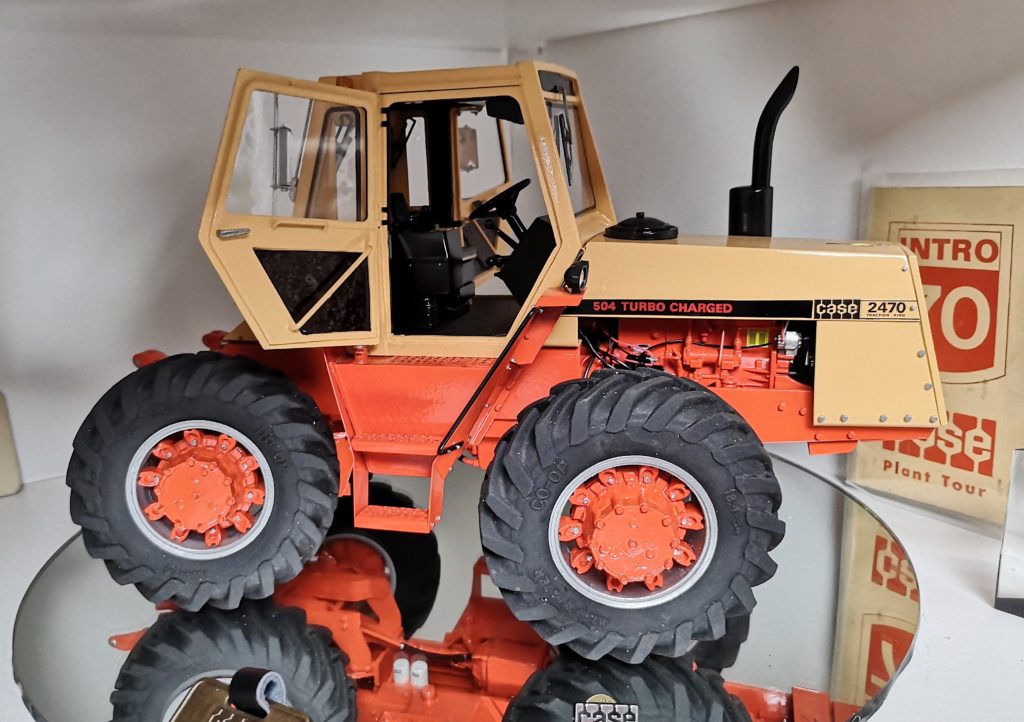 His favorite tractor of all time is the Case 2470, ,which was never released by the company as a 1/16th scale toy, so Dr. Ghislain Marleau built one from scratch. The toy took him more than 1,000 hours to build, installing more than 400 tiny nuts and bolts with the help of a magnifying glass. Photo by Reid Masson 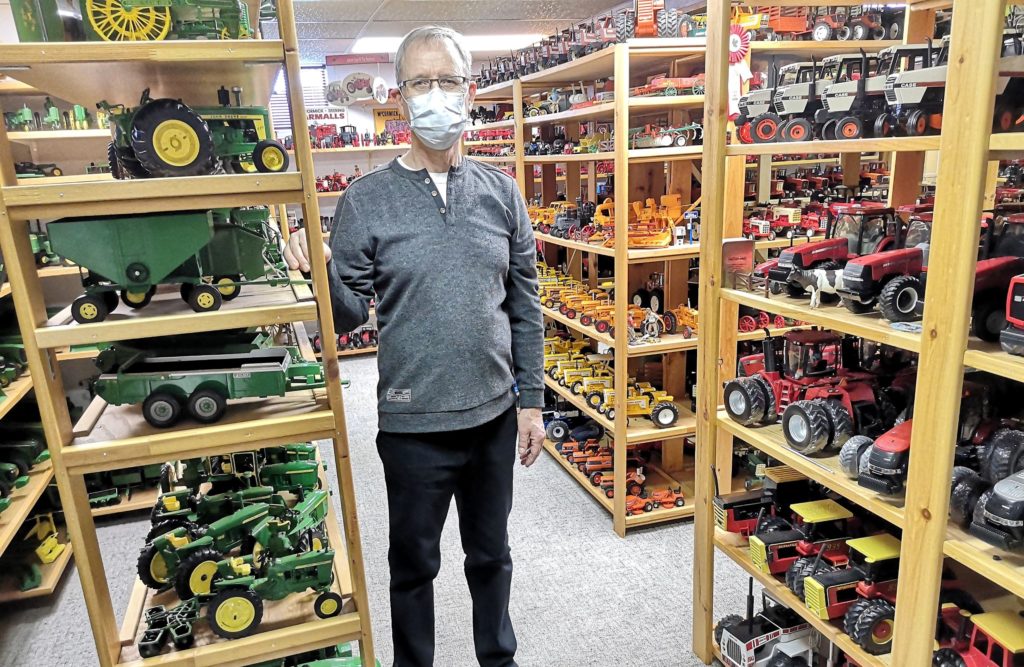 Ghislain Marleau with some of the more than 5,000 toy tractors in his collection. Photo by Reid Masson 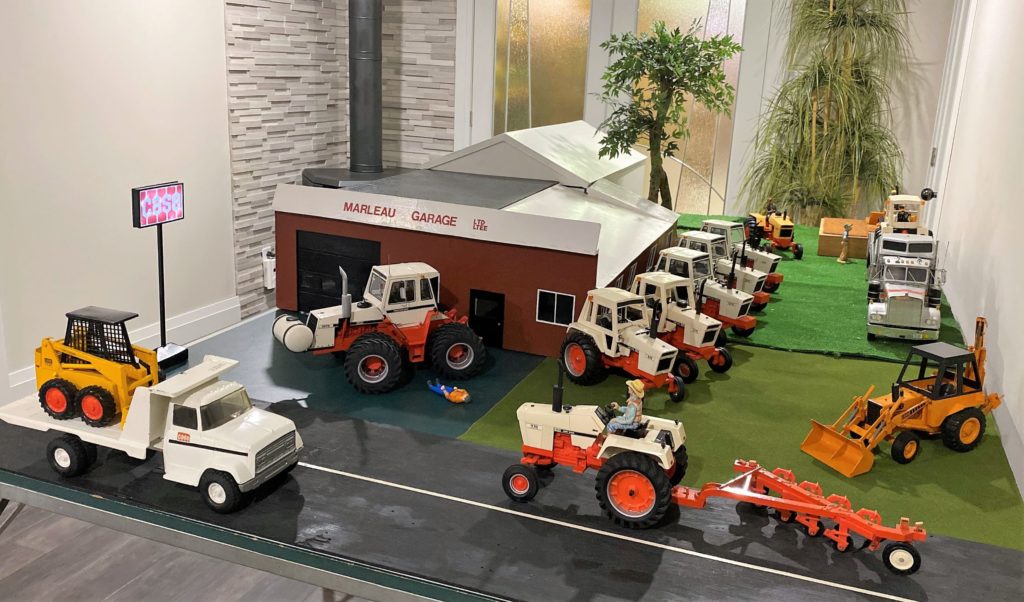 Marleau’s collection includes a custom-built replica of his family’s business in St. Bernardin. The collection also includes documents and advertising from Marleau Garage. 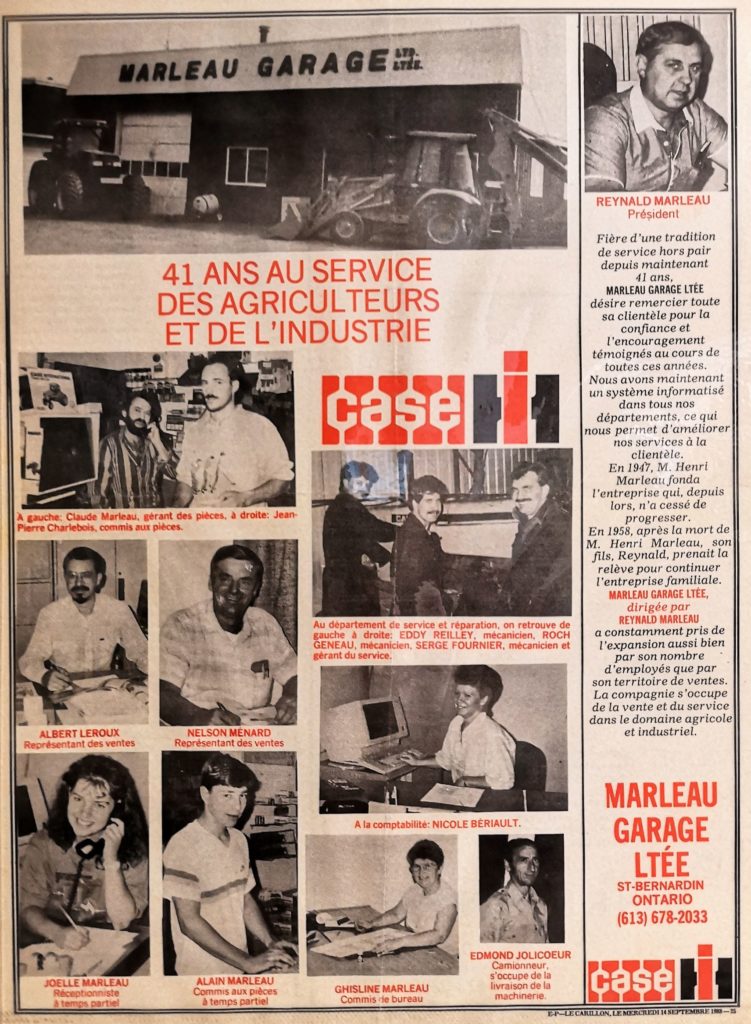 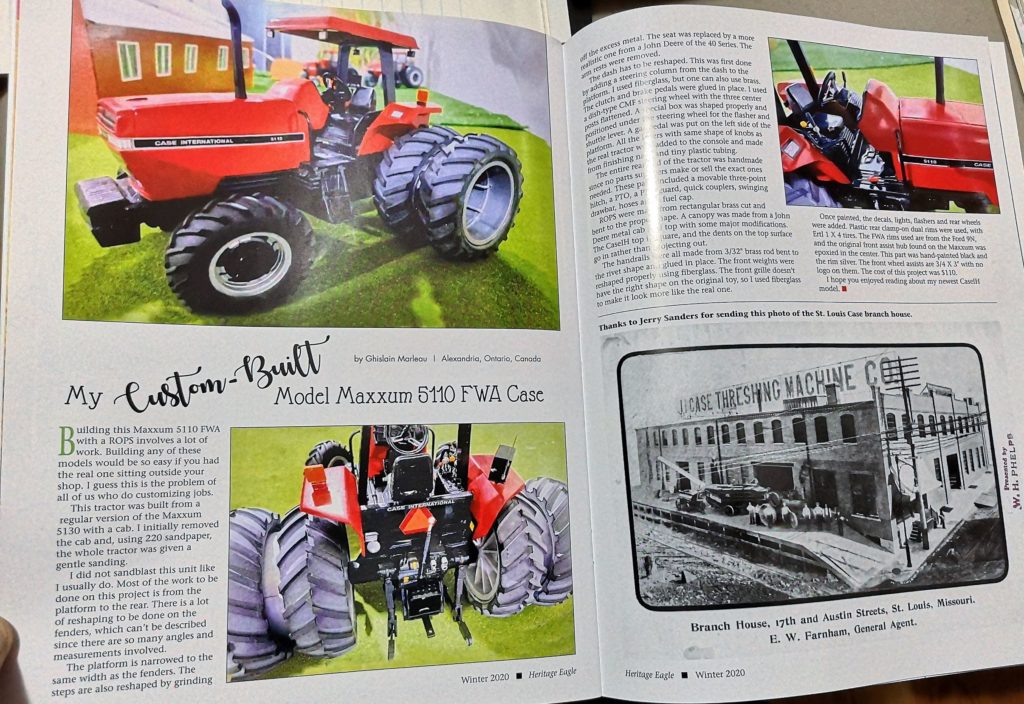