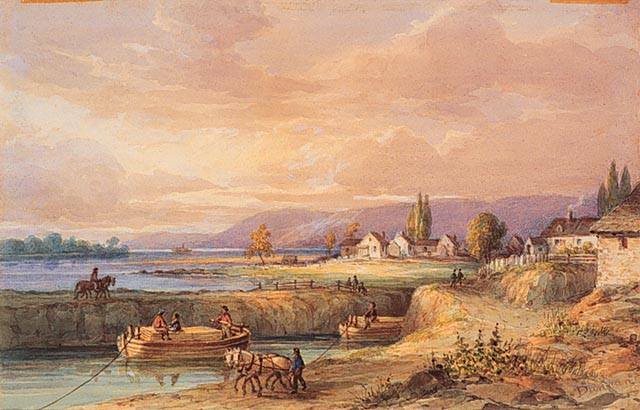 Grenville or Carillon Canal on the Ottawa River. Painting by James Duncan c. 1867, Watercolour over graphite on wove paper, Gift of Brian Buchanan, Ottawa, and Ian Buchanan, Etobicoke, 1986, National Gallery of Canada (no. 29697)

Fifty per cent of the funding needed to restore the Historic Grenville Canal is now officially available.

On Monday, November 23, Argenteuil Member of the National Assembly announced that the Québec government is providing $2.5 million to the Village of Grenville for wall repair and stabilization work on its historic canal.

The canal was built in 1818 as a way for boat traffic on the Ottawa River to bypass the Long Sault Rapids, which disappeared when the Carillon hydroelectric dam was built downstream in the 1960s.  The canal had to be closed in 2008 due to the deterioration of the stone walls in the western section.

Québec Premier François Legault appeared in a video message on Monday morning and said that repairing the canal walls will preserve the heritage of the site and allow citizens and tourists to enjoy the canal.  He noted that efforts to have the work done began with late Grenville Mayor Luc Grondin in 2017.

Agnès Grondin, who is a cousin of Luc Grondin, highlighted the historical importance of the Ottawa River and the Long Sault Rapids to indigenous people and early European visitors such as Samuel de Champlain.

However, the village of Grenville still needs the other half of the funding from the federal government to make the work on the canal possible.

The federal government owned the canal until 1988 when it was transferred to the village.  A request has been made to the Department of Canadian Heritage for the other $2.5 million required to do the restoration work but no announcement has been made.

Grenville Mayor Pierre Thauvette said that the municipality is anticipating a response from the federal government.

Agnès Grondin said that she is optimistic that an announcement for the federal portion of the funding will be made.

Grenville village Director-General Alain Léveillé said that the municipality is presently working with the MRC d’Argenteuil’s engineering service and Transport Canada to obtain the authorization to do the work on the canal while the wait continues for the federal funding.