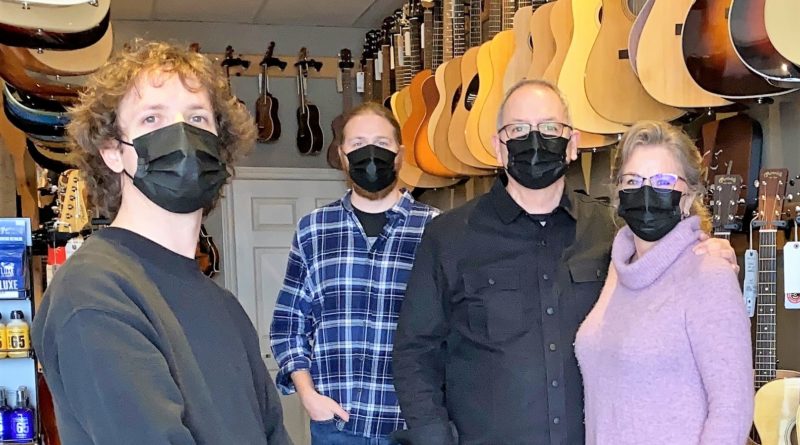 Staff at Bobby Lalonde Music in Hawkesbury have had to adapt to many changes in 2020 due to the COVID-19 pandemic. Left to right: Simon Joly, Adam, Bobby and Joy Lalonde.

It’s been a year of adaptation for Bobby Lalonde Music.

Instrument sales across Canada are booming due to the COVID-19 pandemic and staff at the popular Hawkesbury store have been busy keeping up with demand. But at the same time, the cancellation of individual music lessons and live music performances has led to a shift in the operations of many music stores.

“The pandemic has made some pretty major changes and in saying that, I feel very fortunate because although some things have basically fallen of the edge of a cliff – like sound and lighting production and the music school – instrument sales have shot up somewhat – enough that it has created a bit of a counter-balance,” says store owner Bobby Lalonde.

Instrument makers have seen a trend of increased sales since the pandemic began in March. Fender Musical Instruments Corporation reported last week that it expects to reach record sales of more than $700 million in 2020 – a 17-per-cent boost over 2019.

Locally, guitar sales have seen a big boost and keyboard sales have gone “through the roof” Lalonde says, with the largest increase noted in entry-level instruments.

“A lot of the instruments, especially in the affordable range, is what a lot of people who have more time now are looking for – in order to try out an instrument and see if they like it,” the store’s namesake observes, adding staff have seen a large increase this year in older adults looking to learn how to play. “They’re not necessarily kids and teenagers. A lot of them are adults who have had ‘I want to learn an instrument someday’ in the back of their brains.

“All of a sudden, they’re presented with a time-abundance situation where they can actually give it a shot.”

One issue with trying to pick up an instrument during a pandemic is that lessons at the Bobby Lalonde Music School are not currently being offered. The music studios in the basement of the building on Hawkesbury’s Main Street East have not been used since last March, when lessons were initially shut down for what was hoped would be a temporary situation. The store’s owner is hopeful lessons will come back strong once the pandemic ends and people want to develop their skills further.

“Lessons are in many ways the foundation of our business and industry,” Lalonde notes. “When you see big companies like Fender offering free lessons online, that’s because they want to make sure that people are playing instruments so that they keep purchasing instruments.”

In the meantime, online instruction and lessons – such has the free ones offered by Fender – are a good place to start. While there is some bad advice to be found online, there is also a treasure-trove of valuable information available.

“If you can sift through the bad, there is a lot of good stuff online, so that would be my first recommendation, particularly as people are spending a lot of time at home.” Lalonde advises. “But as soon at things develop into a safer situation where you can spend time in person with a teacher, it’s a better call, because you have someone that’s listening to you that can help with your development.”

The most unfortunate aspect of the pandemic has been its affect on staff at the store who worked directly in teaching lessons and on live-sound events. With the music school shut down and live gigs canceled, some job descriptions became non-existent. “That was a very difficult phase to go through,” the store’s owner says somberly.

However in looking back on 2020, Lalonde says he, wife Joy and son Adam are taking a positive outlook, noting things turned out far better than it looked during the first eight weeks of the pandemic, when the store was shut down completely.

“We’re very thankful that instrument sales balanced out the losses of the other aspects of our business,” reflects Lalonde, noting the support of long-time customers has been greatly appreciated. “Once we reopened, customers started trickling back in and then we saw instrument sales and people were turning what would have been travel money all of a sudden into a really nice guitar.

“That was when we could start to see a light at the end of the tunnel.”