Local author’s first book describes the good, the bad and the ugly of life in a third-world country 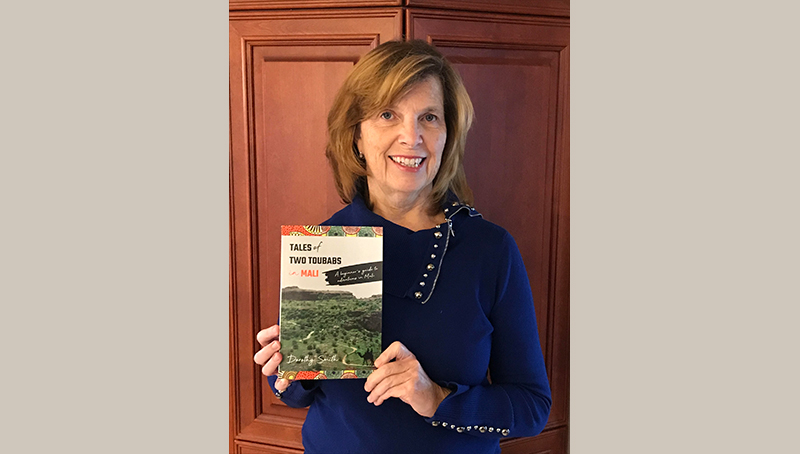 Dorothy Smith was in shock. Dazed and injured after being attacked and robbed while on her way back home after an evening out for dinner, she managed to stagger the short distance home before collapsing.

“I come to in a panic as I feel the arm tightening around my neck,” reads an excerpt from Smith’s new book Tales of Two Toubabs in Mali. “It takes a couple of seconds before I realize that I am, in fact, perfectly safe, in my own bed. At this point I am perspiring profusely. The reality of Friday evening keeps coming back to haunt me.”

Smith’s first book – subtitled A Beginner’s Guide to Adventures in Mali – describes dozens of her experiences in the West-African country while working for the United Nations Children’s Fund from 2008-2010. The work is comprised of emailed letters she wrote to friends and family at the time to keep them up to date and maintain contact while she was living in what at the time was the third poorest nation in the world.

“I knew when I went overseas that I was going to be seriously missing my community,” recalls the first-time author, who wanted to chronicle her adventures while in Mali. “But I didn’t like the idea of having a blog where I had no idea who was reading what I wrote.

“Instead I decided to send regular emails home and that way I controlled who got the stories. And the agreement was that they had to occasionally write back to me, so that there was a back and forth and I still felt connected to them.”

All of the letters Smith wrote while she was in Mali are reprinted in their entirety. The one exception was the removal of all references to her employment activities. “(The book) is really focused on my personal everyday experiences and nothing to do with work.”

Most of Smith’s writings focus on everyday life in Mali, where the native language is Bambara and the working language is a version of French far different from what is spoken in Canada. There are numerous stories of the frustrations of getting even the simplest things done in a country where you’re just going to have to wait. There are visits to neighboring nations, tales of viewing elephants in the wild and the simple task of just trying to avoid getting bitten by a snake.

Perhaps the most compelling aspect of Smith’s book is that it offers two different perspectives. After a few months in the country, Smith is joined by her then husband David, who adds an alternate viewpoint to many of the experiences. He is the second of the two ‘Toubabs’ (the Bambara term for a white foreigner).

Although David eventually embraces life in Mali – even bravely purchasing a motorcycle on which to get around the crowded streets – it is obvious that at the beginning he has more difficulty in making the adjustment to life in the third world.

“I’ve got a much bigger sense of adventure than he does,” laughs Smith, who remains on good terms with her ex. “He really cringes and grumbles going into anything, but once he is in, he’s fine – whereas I tend to embrace things and just go with them.”

Retiring from work with the United Nations two years ago, Smith moved from her home in Saint-Lazare to live in St-Eugene. After being told for years by family and friends that she should compile her letters into a book, she started work on the project last spring. Thanks to extended time at home due to the COVID-19 pandemic, she was able to finish the work over the summer.

Tales of Two Toubabs in Mali is available for purchase online and through The Review offices in Vankleek Hill. All proceeds from the book are being donated to the Leukemia and Lymphoma Society of Canada in memory of Smith’s eldest daughter. Jennifer was only 29 years old when she lost her battle with cancer five years ago.

Smith spent 10 years traveling the world in her work with the United Nations – departing Mali for Ethiopia, before concluding her overseas work with five years in Italy. But it is Mali she speaks of with the greatest affection, despite flashbacks of the attack haunting her over the years.

“I thrived when I was in Mali,” Smith recalls fondly. “As difficult and challenging as everything was, I never felt more alive than when I was there.

“All of your senses are heightened and I appreciated things so much more.”

Email: [email protected] to purchase a copy and organize local pick-up at The Review. Tales of Two Toubabs in Mali sells for $24.95.