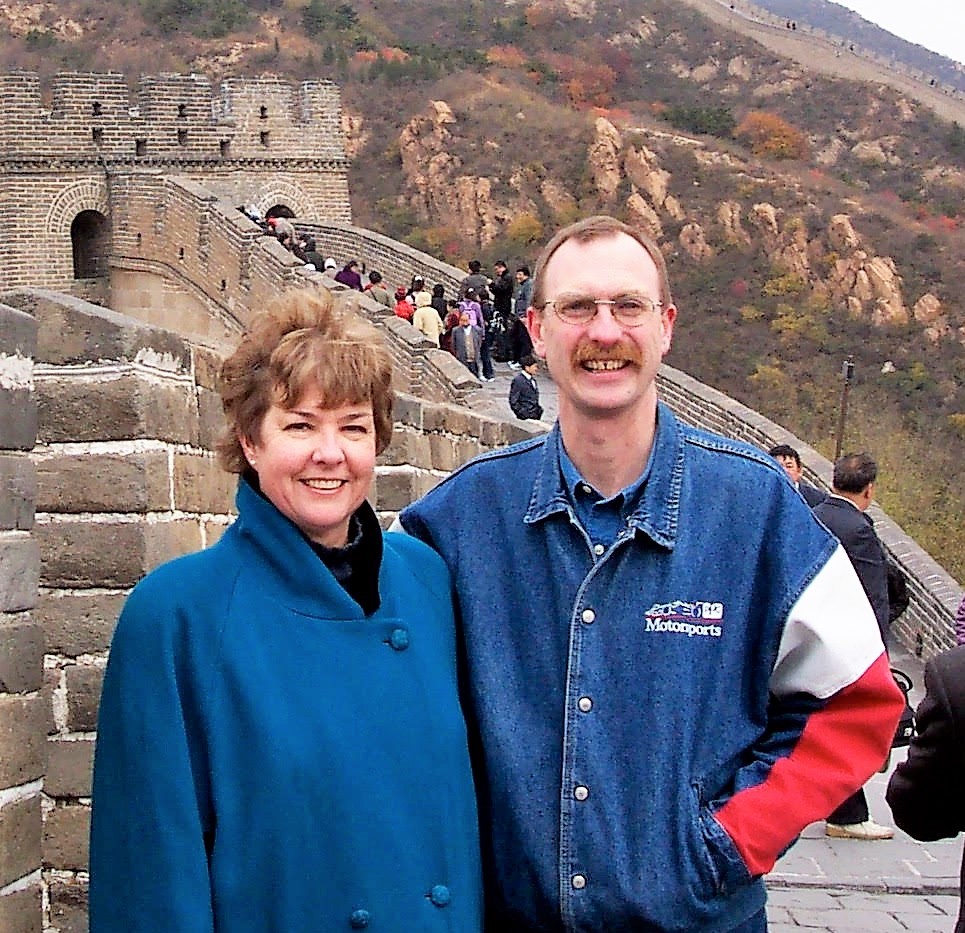 Bill and Mav Hall at the Great Wall of China. The couple had a first-hand look at China’s growth while Bill was working as Director of Asian Operations for PPG.

Vankleek Hill resident Bill Hall had a front-row seat to watch China grow from a third-world country into a manufacturing superpower.

The former director of the Pittsburgh Plate Glass plant in Hawkesbury traveled the world for PPG, including two multi-year stints in China. As PPG’s Director of Manufacturing for Asia from 2002-2006, Hall led the construction of multiple new PPG manufacturing facilities in China. He and his international co-workers were welcomed with open arms by a country desperate to advance its fortunes in the world.

“At the time the people in China saw themselves as a third-world country – big cities in China were still installing street lights,” recalls Hall of his first impression of the country and its people. “China was like a big sponge – they were just soaking up knowledge about how to manage things, how to build things, and at the same time they were leap-frogging the west.”

PPG was just starting to ramp up manufacturing in China when Hall was sent to the city of Tianjin to assist with the company’s supply chain in 2002. As the company continued to expand in Asia, Hall was put in charge of all Asian operations. PPG and other companies were adding factories as fast as they could be built and the lifestyles of the Chinese people were improving by leaps and bounds.

“Nobody had a private telephone when we went over there and by the time we came back from China to Vankleek Hill in 2006, more than half of the Chinese people had a cell phone,” remembers Hall, who notes the Chinese had an advantage in that the country was not vested in a wired telephone grid. “The advantage they had was that they leap-frogged over that system where you have to have a line running to every house.”

Brought back from China to become director of the PPG glass factory in Hawkesbury in 2006, Hall and his wife Mav purchased a home in Vankleek Hill. He spent three years in charge of the local manufacturing facility, which was struggling due to the age of the facility and high operating costs. Despite efforts to save it, the Hawkesbury plant was closed permanently in 2009.

“The problem is there were just so many things running against (the Hawkesbury plant) at the time it was just impossible (to save it),” Hall remembers. “Hawkesbury was a good plant, but PPG was looking to get out of the glass business.”

Shortly before the closure of the Hawkesbury plant, PPG sold off its glass business entirely and Hall found himself now under the Pittsburgh Glass Works banner. PGW assigned Hall on another foreign project. This time he would be off to Poland to build a new windshield glass plant to serve European customers, most notably for Mercedes, which had been one of the Hawkesbury plant’s biggest customers.

“We liked our house in Vankleek Hill and the community so much that decided we wanted to keep the house here and rent it,” says Hall, who along with his wife was born and raised in Port Colborne. “It turned out that Mav’s parents were actually looking for a place to live at the same time so we ended up having them move into the house while we were overseas.”

The Halls spent three years in Poland, returning to Canada on New Year’s Eve of 2013 once the new plant was complete and up to speed. It remains to this day one of Europe’s largest windshield production facilities, serving Mercedes, Volkswagen, Porsche, Volvo and other car companies.

The Halls were back in Vankleek Hill in early 2014, living in their own basement while Mav’s parents continued to live upstairs. But it was only a short time before Hall was on his way back to China – this time to build another automotive glass factory in the city of Zibo, located just south of where he had previously worked. It was only seven years since the Halls had last been in China, but the country had changed dramatically in that time. Hall found himself not as welcome as he had been a decade earlier.

“China now saw itself as a world power and they were not as receptive to Westerners – I was a resource they knew they needed, but they would have preferred somebody Chinese,” remembers Hall, adding the standards of living were incomparable to his first visit. “Every home had a refrigerator when we went back. The status symbol had gone from the cell phone to the car.”

The Halls came back to Canada in 2017, when Bill retired for the first time and the couple moved back into their home in Vankleek Hill. Then Bill was called back to Vitro Glass (which had purchased PGW) six months later and worked from home for the company, before retiring again last May, when the COVID-19 pandemic forced Vitro to delay the project on which he was working.

With focus increasing on China in the wake of the international pandemic, Hall is often asked about his experiences working in the country. There is a fear of China’s strength in manufacturing and international trade and Hall believes at least some of it is justified.

“It’s at the point where most things that we use every day are made in China and nobody knows it – everything is made in China now,” Hall says, adding the biggest threat is the theft of technology. “They do not have a legal process that’s like what most of the world follows and do not respect copyrights.

“They have no problem pushing the boundaries.”

Despite those fears, Hall does not believe Canada should boycott Chinese-made products.

“There’s an old saying ‘keep your friends close and keep your enemies closer. If we felt there were threats coming from China and that we should isolate ourselves from China, that would be the exact wrong thing to do.

“We don’t want to be surprised. We want to be in a constant state of communication with China so that we can anticipate what their strategy is, where it is going to take them and how it is going to impact us.”