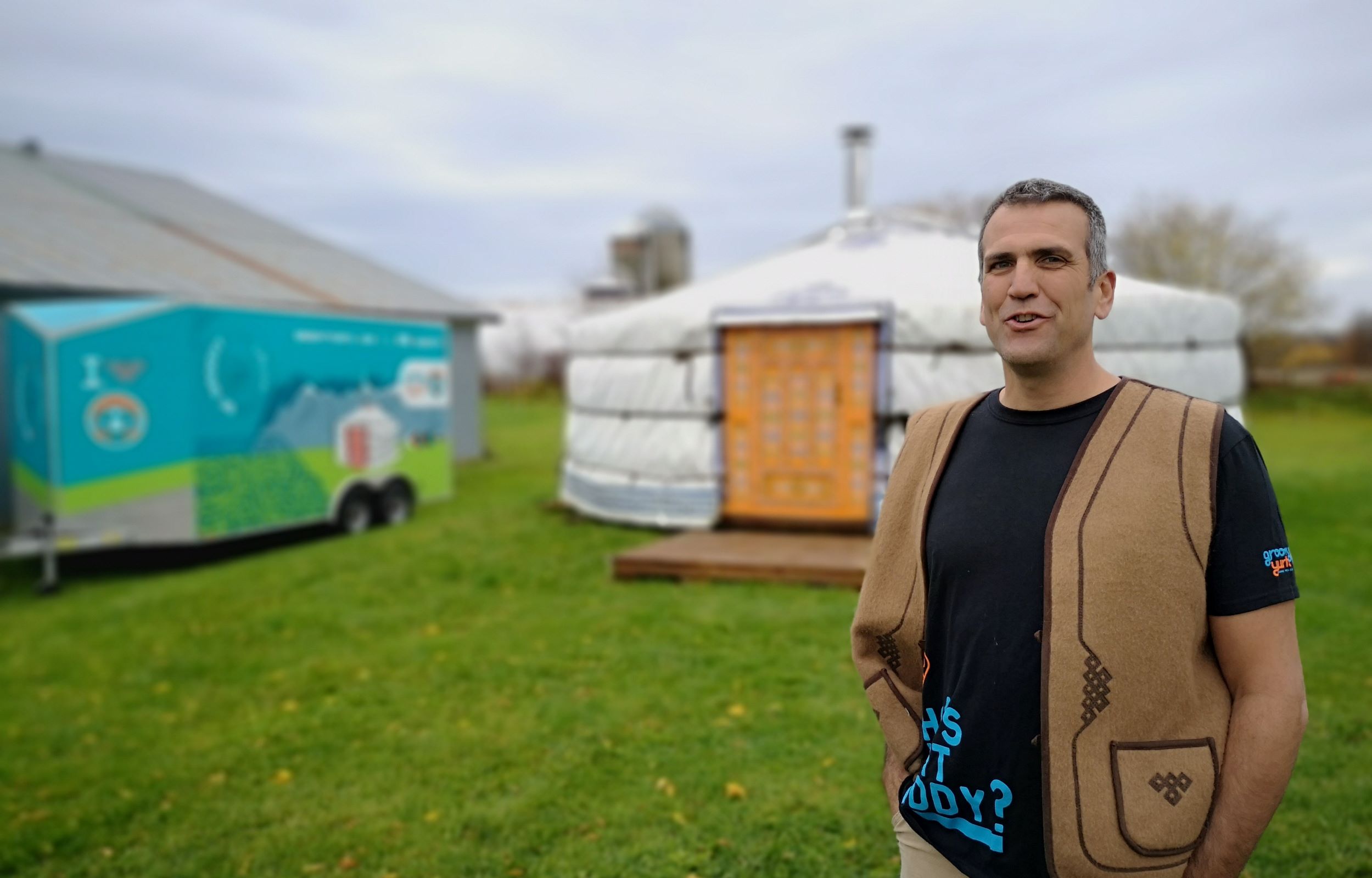 Groovy Yurts owner Yves Ballenegger in front of one of the company’s Mongolian yurts. There are three units set up on the property available for overnight rentals. Photo by Reid Masson

Yves Ballenegger has a clear memory of his first experience buying and reselling traditional Mongolian Yurts.

The owner of Groovy Yurts in Alexandria was living in his native Switzerland in the early 2000s and delivering school supplies to remote regions. Globetrucker – a non-profit organization run by Ballenegger – was asked for help by a school far outside the region it normally served.

“In 2003 we received a request from a school in Mongolia – which was far enough and crazy enough – so off we went,” recalls the adventurous Ballenegger, who then needed to find a load for his return trip. “Of course with a semi, on such distances I can’t come back empty and I always had the dream of supporting the local economy. I bought three yurts with the last pennies I had.”

Once back in Switzerland, the yurts sold quickly and provided enough funds for a return trip to Mongolia. Ballenegger suddenly found himself in the yurt business, forming Groovy Yurts shortly after his second trip to the country.

In 2006 Groovy Yurts moved to Canada, establishing a location south of Montreal. The business was a moderate success, but it was not until a move to North Glengarry in 2015 that Ballenegger was able to take Groovy Yurts to the next level. The move into an abandoned farm on McCormick Road just north of the Alexandria provided the location and space the growing business required in order to expand.

Ballenegger is extremely grateful to Stormont-Dundas-Glengarry for its support of Groovy Yurts since moving to the area in 2005. He notes the old farmhouse, barn and outbuildings most likely would have eventually been torn down due to neglect rather than being rebuilt and repurposed.

“What we managed to do on this old farm would have been difficult elsewhere, but it was possible here and actually supported,” enthuses Ballenegger, pointing to a huge barn which has been upgraded as a warehouse and work facility. “We finally had enough space to store yurts, we had enough space to prepare yurts – we were much better organized. Suddenly we were able to respond to much bigger demand.”

Groovy Yurts now sells more than 100 authentic Mongolian yurts each year. The company also rents yurts for various occasions and for overnight stays on the company’s property. All of the yurts are built, assembled and fine-tuned in Mongolia, before being shipped across the world to Alexandria. There they are put together as kits for shipment to customers across North America, as well as Europe and South America.

The yurts sold out of the Alexandria location can be ordered in a variety of sizes, from two-panel units eight-feet in diameter all the way up to 12-wall units that can house a large party. About 30-per-cent of the company’s customers live in them year-round.

Most of the yurts are personally delivered to customers by Ballenegger himself on an annual delivery tour with the company’s 18-wheeler.

“People will order for the delivery tour, so they will either choose from stock, or if they are early enough, they can order exactly what they want – built to their spec in Mongolia,” the company’s owner explains.

The tour travels across Canada, through the Prairies and then up to the Yukon – one of the company’s biggest sales spots. The delivery crew also acts at set-up assistants to help the customer install and assemble the finished product.

Groovy Yurts currently employs 10 full and part-time employees and is in the process of hiring two more. Ballenegger is eager to grow the company, but quality over quantity is first on his mind.

“I want to grow slowly, so we are learning, we’re improving quality. As we feel ready to sell more we are just going to do it at a human pace and make sure that our customers still get the service they deserve.” 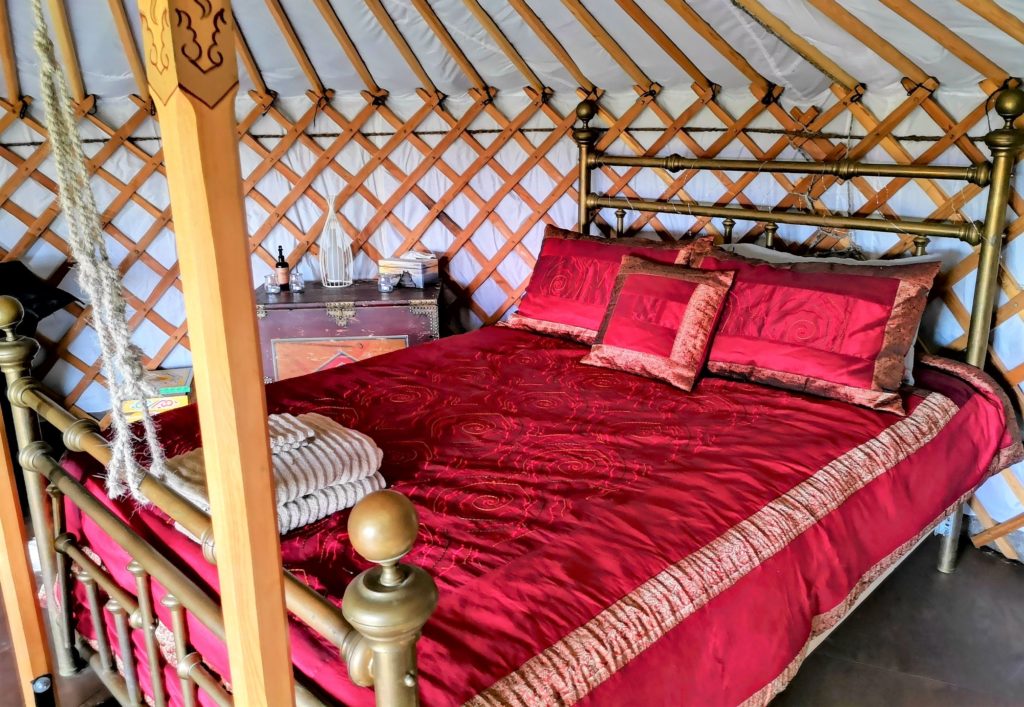 The rental units on the Groovy Yurts property come in three sizes and are furnished in traditional Mongolian style. Photo by Reid Masson 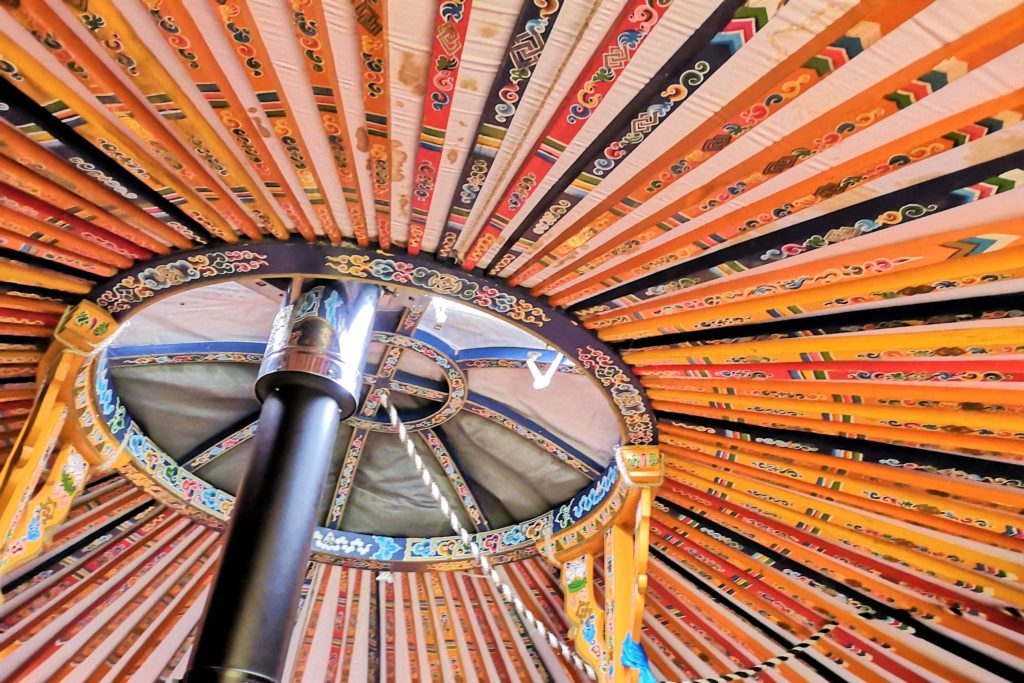 Colorful, intricate ceilings are a hallmark of Mongolian yurts. Photo by Reid Masson 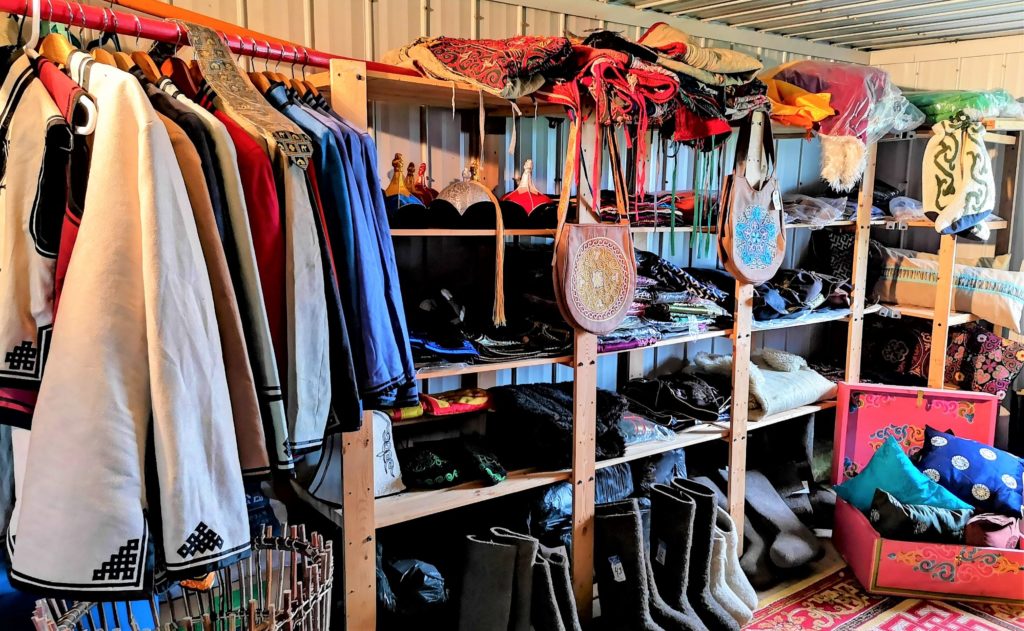 Yurt-related items and platforms are produced at the Groovy Yurts location on McCormick Road north of Alexandria. Photo by Reid Masson