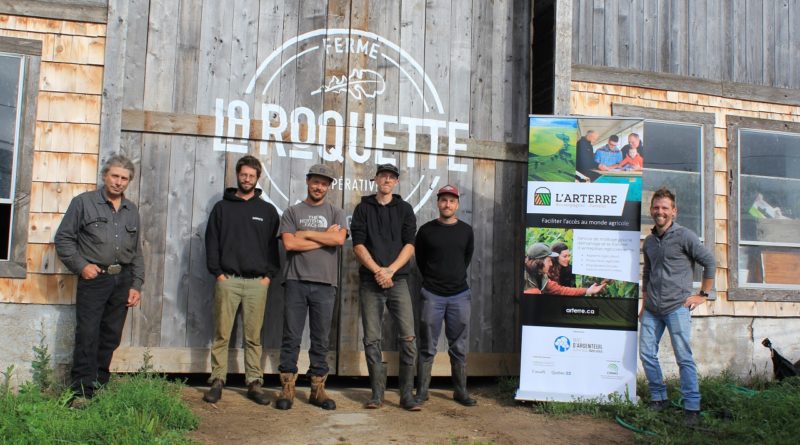 The MRC d’Argenteuil RCM is promoting its recent networking through the L’ARTERRE program between the Ferme la Roquette cooperative, and Raymond and Rémi Jetté.

L’Arterre is an MRC d’Argenteuil service that aims to support and twin aspiring farmers and landowners in order to facilitate the establishment in agriculture in the region.

In the summer of 2018, the Argenteuil MRC initiated a first meeting between the five young entrepreneurs and Raymond and Rémi Jetté, two organic farmers in Brownsburg-Chatham.

Over the next year and a half, the aspiring young farmers took the time to assess the various location options suitable for their project before making their choice on one of the lands available in the Argenteuil MRC.  Proactivity, collaboration with the community, synergy with the owners, and technical characteristics were among the issues they considered while making their decision.

The success story between Ferme la Roquette and the Jetté family illustrates how the MRC d’Argenteuil is a prime land for the establishment of young entrepreneurs, hence the relevance of continuing our efforts with L’ARTERRE in order to ensure a strategy in the development of this promising business niche,” said MRC D’Argenteuil Prefect Scott Pearce.

“More and more people who do not come from this background want to create their own profession in the sector. However, the land, the main asset for the agricultural establishment, or the acquisition of a business, is difficult to access outside the family. The MRC as an agent is essential in order to offer this personalized support,” said Brownsburg-Chatham Mayor Catherine Trickey.

Those interested in the L’ARTERRE service can obtain more information and register by contacting Palardy at 450 562-2474, extension 2342 or at [email protected]. The service is free of charge.

The MRC d’Argenteuil would like to thank the Jetté family for their openness and dynamism with of the next generation of farmers, thus contributing to the development of the community of Argenteuil and wishes good luck to the entrepreneurs of Ferme La Roquette.

L’ARTERRE was established in 2012 in the MRC de Brome-Missisquoi, and now serves more than 20 MRC’s in Québec. The MRC d`Argenteuil was the first to join the Brome-Missisquoi initiative in 2013.