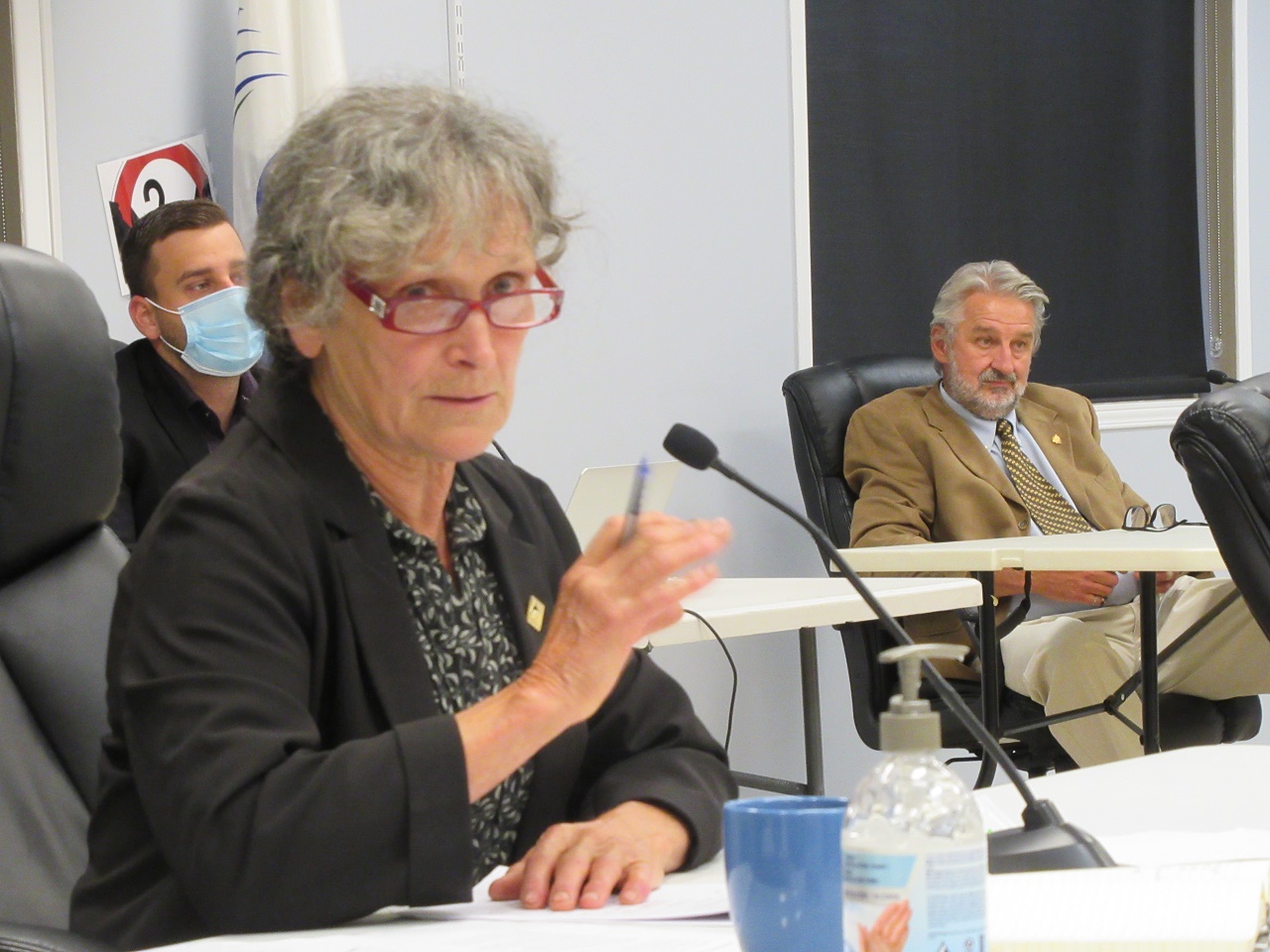 Brownsburg-Chatham Mayor Catherine Trickey at the August 4 2020 council meeting. Councillor Stephen Rowland is at the right. Councillor Kévin Maurice is in the background to the left. Photo: James Morgan

Mayor Catherine Trickey began the meeting with a warning for property owner Susie Léger and an online publication that frequently opposes municipal policies and decisions. Léger owns property, including a former church that is adjacent to the site of the proposed library and community centre complex on rue des Érables (Route 327).  The online publication had stated that Léger’s property was mistakenly included in the Place du citoyen plan and would be expropriated by the municipality and that she would be paid one dollar for the property.  The story also alleged that Léger had plans to develop a private facility on the site that would be similar in nature to the Place du citoyen.  The municipality has previously denied the allegations.

Trickey repeated the message of a July 27 press release stating that the municipality has no intention of expropriating the Léger property for one dollar and that no such project plan for a private multi-use space at the site has been filed with the municipality.

The Review attempted to contact Léger and obtain comments from her about the situation but no response was received by publication time.

District 1 Councillor Gilles Galarneau, a proponent of the Place du citoyen project, read the official results of the registry the municipality created to allow citizens to petition for a referendum on the borrowing by-law for the approximately $5.8 million project.  Up to two-thirds of the cost will be covered by the Québec and federal governments.  To force a referendum, 772 registration forms were required, but only 579 admissible forms were received by the end of the registry period on July 27.  Galarneau emphasized that the registry process was conducted with an emphasis on transparency to citizens.

However, two councillors made another attempt to force a referendum on the project.

District 6 Councillor Stephen Rowland, who had previously urged citizens to support the previous registry for a referendum, introduced a resolution to again put the Place du citoyen borrowing by-law to a vote, which was seconded by Laurin.

Rowland said that he supports the idea of the project but acknowledged many citizens, including those in his district, oppose it, and therefore all voters should have the opportunity to decide if it should proceed.

“This is an important consideration for the town,” he said.

Councillors Rowland, Laurin, and Sylvie Décosse (District 3) voted in favour of the resolution, but it was defeated by Councillors Galarneau, André Junior Florestal (District 2), Kévin Maurice (District 4), and Mayor Catherine Trickey who voted against it.

During one of the question periods, a resident noted that several of the forms that circulated allowing citizens to register their request for a referendum were not produced by the municipality but looked official.  The resident, along with Clerk Pierre-Alain Bouchard stated that they were produced by Martin Charron.  Bouchard explained that Charron had consulted with the municipality in developing the template for the form, which was nearly identical to the forms offered by the municipality and met Québec government specifications.  The only difference was that a message urging citizens to register for a referendum was printed on the reverse of the Charron forms.  Bouchard confirmed that the independently-produced forms were admissible during the registry period if citizens submitted the correct information.

Trickey said it is unlikely that there will be another effort to force a referendum on the Place du citoyen financing by-law.