Champlain councillors limit L’Orignal Beach to their own residents, from 9 to 6 until further notice 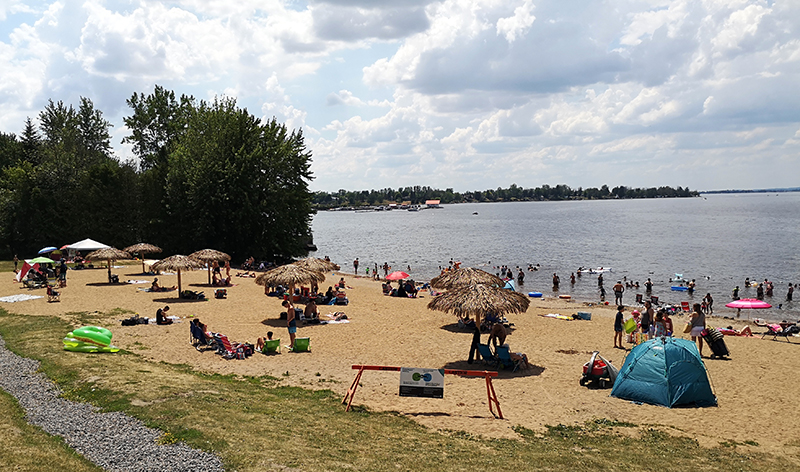 Due to a high rate of water flow along the Ottawa River and its location away from urban centres, L’Orignal Beach is seldom affected by high E. coli levels. Photo by Reid Masson

Champlain Township councillors have just declared that the L’Orignal Beach and the boat launch in the park are closed to non-residents until further notice. Those who have rented lots at the L’Orignal Campground will continue to have access to these facilities. The decision took place at a July 9 special meeting at 12 noon, which was livestreamed on the township’s Youtube channel. The township has also said that the beach hours will now be from 9 a.m. until 6 p.m.

The closure comes after additional policing and monitoring, organized after the council’s regular meeting in June at which it discussed the issue of overcrowding, and the breaking of rules. Smoking, barbecues, alcohol consumption and crowds of people who were not practicing physical distancing had led to concerns. Lack of parking and observation that many cars in the parking lot had Quebec license plates had council considering whether or not to limit access to the beach, as part of discussions at its June meeting.

The L’Orignal Marina is not affected by this decision, the mayor noted, as it is a federally-owned facility.

Two councillors felt the move would hurt L’Orignal businesses because the decision would reduce visitor traffic in L’Orignal. Vankleek Hill councillor Troy Carkner and Bigelow mentioned the local businesses and how especially during a pandemic when businesses had been adversely affected, the beach restrictions would likely undo much of the increased business enjoyed recently due to more visitors in L’Orignal.

Parks and Recreation Director Lisa Burroughs said that despite increased support from the OPP and bylaw enforcement hours, that crowds had surged again even on weekdays since the beginning of July.

Bigelow mentioned that in some instances, grandparents were taking children to the beach and that although the children were from a Champlain Township home, the grandparents might be from a neighbouring municipality. Would this mean the group would be denied access to the beach?

The answer was: yes. All adults wanting access to the beach must be Champlain Township residents.

Champlain Township Mayor Normand Riopel pointed out that the move was also to prevent the spread of COVID-19, saying that it was council’s job to protect residents.

The township will be hiring new staff to fill the position of gatekeeper at the beach. There will be two five-hour shifts to cover the 10 hours between 8:30 a.m. and 6:30 p.m. seven days per week, with the beach open from 9 a.m. to 6 p.m. Burroughs said that a security guard will arrive on site toward the end of the day and will be on hand to advise people on the beach when it is time to leave.

When asked about extending the beach hours later in the day, Burroughs said that the shifts she outlined meant that a worker would be on duty for five hours with no lunch break. A shift longer than five hours requires that she give the staff member lunch and that would mean having an additional staff person there to cover the lunch break, she said.

Bigelow reiterated that she felt there would be more issues if the township went ahead with this move.

There was discussion about charging non-residents for beach and boat launch access, but in the end, it was decided that it was late in the season to implement charges, which would have to be approved by a township by-law. West Hawkesbury ward councillor Gerry Miner also pointed out that many of the transactions might be cash and that many businesses were not accepting cash at this time, trying to reduce hand-contact with money that would be touched by many hands.

“We live in times that are not normal. It’s hot. The beach is nice. It’s too bad that we can’t share it,” said Riopel.

All agreed that it wasn’t a case of saying that non-residents were the ones disobeying the rules at the beach.

“There are a lot of good people from outside the area,” Miner said.

A suggestion from Longueuil councillor Michel Lalonde to possibly include residents of neighbouring municipalities among those permitted to use the beach was shot down by the mayor, who said it would be discriminatory.

L’Orignal councillor Violaine Tittley stated that she took COVID-19 very seriously and said that she knew how she was going to vote.

“I feel like we are penalizing non-residents,” said Bigelow. “What are we going to do if we restrict it and it is still overcrowded?” she asked.

Signs will be posted at the entrance to the beach and the township says it will post the info on its Facebook page and website right away.