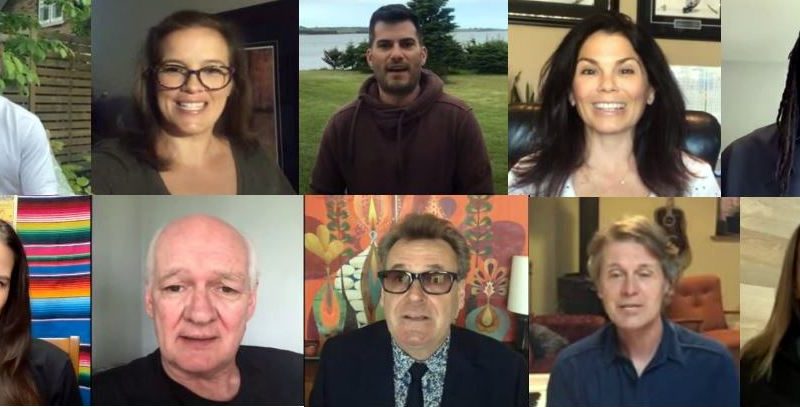 Against all odds, Vankleek Hill Collegiate High School’s 2020 year end student awards ceremony will likely be the most memorable one in the school’s history.

A total of 33 celebrity guests donated their time to present awards and provide inspirational messages for VCI students, as the school held an online 2020 Virtual Awards Ceremony on YouTube, June 19. The guest list was a virtual ‘Who’s Who’ of Canadian personalities, with representatives from sports leagues, musicians and actors all taking the time to record personal videos to play at the event.

VCI Physical Education teacher Dan Tremblay was the organizer of the guest speakers, sending out more than 200 emails and online requests to various celebrities around the country. Tremblay said the idea was sparked when he was speaking with NHL linesman and Vankleek Hill resident Steve Barton about having him as a guest. Barton suggested asking fellow NHL referee Wes McCauley to join him, a few other names came up and the idea snowballed from there.

Tremblay, a former coach with the Toronto Blue Jays, then used his personal contacts to recruit several other figures, including current Blue Jays Strength and Conditioning coach Donovan Santas. From there the event was off to the races.

“We had about five (guest speakers) at that point,” Tremblay recalled. “Not super big names so far, but then I put a line out to (comedian/actor) Gerry Dee of ‘Last Comic Standing’ and a few days later he said he was in and to send him what I wanted him to say. I had also put out a couple of feelers to curlers Craig Savill and Kaitlyn Lawes and they told me yes also right away, so at that point it was a ‘go big or go home’ kind of thing.”

Buoyed by the enthusiasm Tremblay started on a blitz of contacting Canadian celebrities via email and through their online contact pages.

“I started sending messages to anybody who I could see that was either on social media of some sort or had a ‘contact us’ page and told them what I was doing and why I was doing it,” says Tremblay, who estimates he sent out between 200-300 messages. “I went so far as to ask famous people who would probably never do it in 100 years because they are so bombarded with messages, but the majority of people who replied said yes right away.”

If there was a silver lining in the COVID-19 pandemic which forced the cancellation of the regular awards ceremony, it was that many of the celebrities Tremblay contacted were available due to cancellations of their own.

When the dust had settled, more than 30 Canadian personalities were on board to provide clips for the event. From there Tremblay paired the celebrity guests with the various awards to be presented, attempting to match up sports personalities, actors and musicians with presentations suited to their areas of expertise – for example having musician Jim Cuddy of Blue Rodeo present the Music and Choir awards. As there were more celebrities signed up than awards to be given out, some of the guests were given lists of awards to present, while others were asked to record personal messages for the students.

“I still wanted them to be in the video, because I thought how cool would that be to have somebody like (race car driver) James Hinchcliffe say hi and give a message to all of the graduates, nominees and award winners,” Tremblay said. “So once I had given out all those awards I didn’t refuse anybody (who wanted to contribute to the video).”

Since the VCI Virtual Awards Ceremony aired on June 19, Tremblay has received a great deal of positive feedback from students, parents and even the guests who recorded snippets for the video.

“I think a lot of people were impressed with the amount of people I was able to get to do this and the quality of the people too,” Tremblay said, noting that some of the celebrities went far out of their way to record their presentations, including Magic 100 radio host Stuntman Stu Schwartz, who recorded his segment from the hospital where he was undergoing treatment for cancer.

“During the day he just sends me a text saying could you send me the text today and I’ll film it today because I’m going through some pretty heavy chemo tomorrow. For a guy like that to be so caring and unselfish and wanting to do something for the students when obviously he’s got 1000 other things on his mind… that really got me. He was fantastic.”