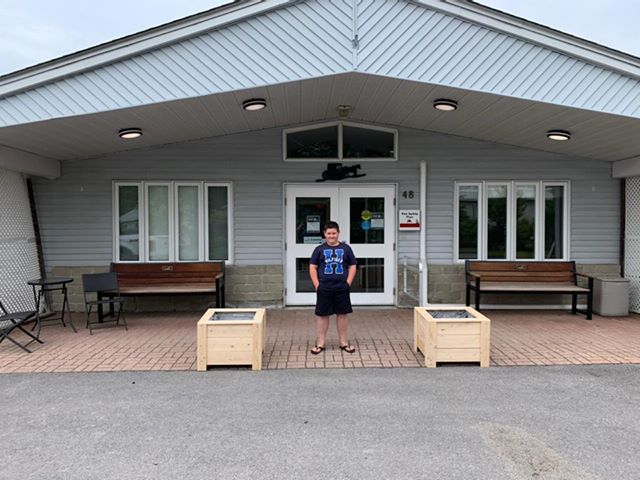 Heritage Lodge seniors residence in Vankleek Hill will be a little more colorful this summer thanks to the efforts of a local youth.

Two flower boxes built by 10-year-old Jayden Taillon were recently installed at the lodge. The suggestion to build the boxes came from his grandmother Joanne MacCallum, who works at the Heritage Lodge.

“I went to Hawkesbury with my grandma and she bought the wood for me and after that I went to her house and I built them,” explained Jayden, who received a small fee from the lodge for his work and used that to invest in supplies for future projects. “With the money I made, I bought some more tools.”

The enterprising young man – who is the son of Daryl and Gaetanne Taillon of Vankleek Hill – hopes to be a carpenter when he grows up and to that end has already made two more flower boxes for neighbors. His father Daryl is very proud of Jayden.

“We’re so proud of him – I mean he’s only 10 years old and he already has plans that when he gets out of high school he wants to be a carpenter and I’ve been encouraging it.

Daryl also notes his son is raring to make more flower boxes now that he has a few under his belt.

“He did two more and the people have already paid for them and picked them up. He’s now just waiting for some more wood to come in. He’s got two more to make and the orders just keep coming in.”