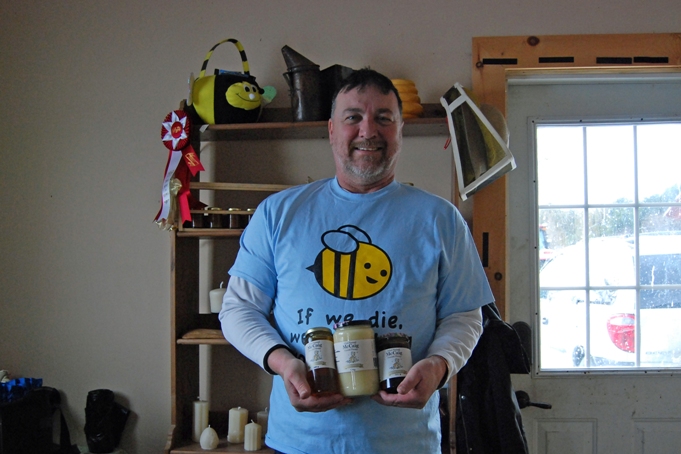 John McCaig displays three of McCaig’s honey varieties: creamed, buckwheat, and clover/wildflower. His t-shirt reads, “If we die we’re taking you with us”, a reference to the importance of bee health to human survival.

“It was big this year,” says McCaig. “The most awards we’ve won in a single year.”

McCaig Honey consistently wins the premier exhibitor award, says John McCaig, and its creamed honey has won six times in the last ten years alone. The Grand Champion Liquid Honey award, one of the most prestigious of its 2019 award haul, McCaig had only won once before. 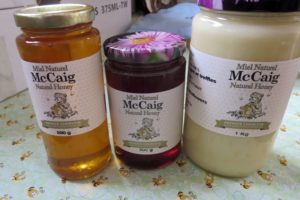 Preparing for the fair takes considerable time, and product is judged on a variety of aspects, including appearance, aroma, and flavour. McCaig says it’s worth it.

“It’s an honour to win,” says McCaig, “but the reason I do it is to make sure we’re still putting out a good product.”

The awards at the Royal prompted more inquiries from people looking for McCaig’s products. McCaig’s honey is natural and non-pasteurized and the company practices organic methods.

McCaig’s honey is currently available from Hudson to Ottawa in stores and local markets. McCaig plans to launch online sales early this year so he can ship his products further afield.

Steady growth is part of McCaig’s business plan. McCaig is also a breeder, a craft he learned from his parents, both master beekeepers. He breeds and ships queen bees and plans to build that aspect of the business. McCaig will also begin this year to harvest bee venom, a product used for medical purposes.

“Bees are amazing,” says McCaig, who calls them “miracle insects.”

McCaig currently keeps millions of bees in hundreds of hives. To reduce competition between bee colonies and to prevent health problems, McCaig keeps his hives in over 20 locations around the area, from Hudson to Glengarry.

“Ideal areas to place the hives are diminishing,” says McCaig, who says the increase in cash cropping in the area has made hive placement a challenge. The best hive locations are near pasture areas, making dairy farms the best sites.

“You have to guess what the weather will be like,” says McCaig, who says no one year is ever the same.

Despite uncertainties in weather, McCaig recognizes the importance of planning a year ahead. One plan for 2020 is a return to the Royal Agricultural Fair in November. He already knows how many awards he’d like McCaig Honey to win: