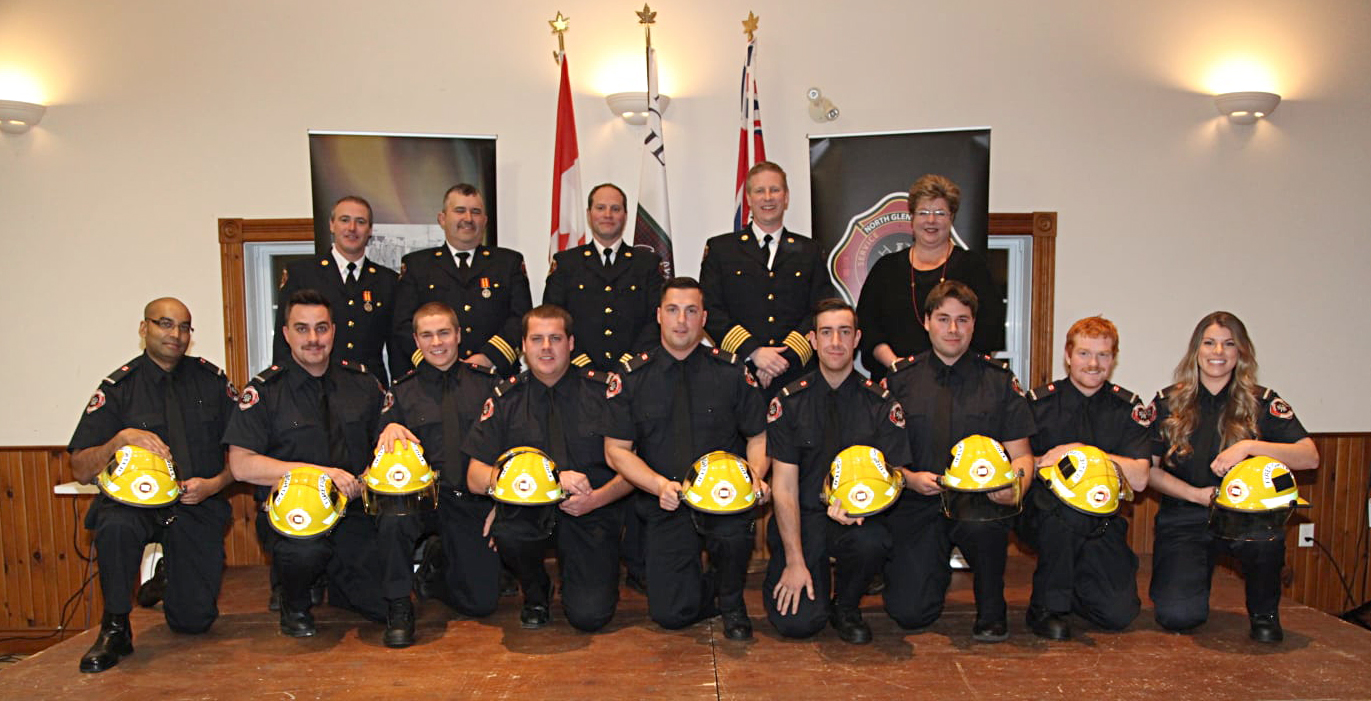 On Saturday, November 30, the annual North Glengarry Firefighter Service Recognition Dinner was held at the Metcalfe Centre, in Maxville. Firefighters and their families were invited to an evening intended to celebrate their devotion and sacrifice to the community they serve.

“Firefighters serve as the backbone of our community. They sacrifice sleep, family and safety to help others. They run towards fire when everyone else is running away. They are our neighbours, friends and coworkers and this event represents an opportunity for us to thank them,” said North Glengarry Mayor Jamie MacDonald.

This year’s ceremony marked the retirement of six firefighters, including former North Glengarry Fire Chief Patrick Gauthier who retired from his position earlier this year. Gauthier helped to modernize our fire department and to streamline training programs. He helped to ensure that firefighters are better equipped to work together as a team and to deal with emergencies. Chief Gauthier was succeeded by Matthew Roy who assumed the position as North Glengarry’s Fire Chief in June.

“Matthew is a natural leader, with more than 19 years of experience in fire services. He has grown through the ranks as a volunteer firefighter, training officer, District Chief and most recently, Deputy Chief.  He brings with him extensive knowledge and experience in both fire services and general management skills,” said the Township of North Glengarry’s Chief Administrative Officer (CAO) Sarah Huskinson, following Chief Roy’s appointment.

Chief Roy is responsible for more than 60 firefighters, working out of three fire stations, located in Alexandria, Maxville and Apple Hill.   He is also responsible for training, fire prevention and emergency response measures.

“The North Glengarry Fire Department has undergone significant changes over the past few years. Modernization initiatives and the vision of our senior staff in the fire department have made it stand out as a model for others,” said North Glengarry’s Deputy Mayor Carma Williams, who assisted in the recognition ceremony.

Former North Glengarry Senior Fire Prevention Officer Eric Hurtubise was another retiree who was recognized at the ceremony. Hurtubise resigned from his position earlier this year to pursue a career as a professional firefighter in the Canadian Armed Forces. Firefighters Sean McCormick, Donald Dashney and Adam St. Denis served an invaluable role in our fire department. Senior Captain Simon Hardy was honoured for more than 15 years service as a firefighter and officer at Station 3 in Maxville. They too were recognized for their service and wished all the best upon their retirement.

During the medal recognition ceremonies, firefighter Randy Picher was recognized for 25 years of service to the fire department. Captain Serge Bellefeuille, Captain Daniel Bray, Senior Captain Laurier Rochon and Firefighter Kevin Villeneuve were each recognized for having served for 20 years.

During the promotion ceremonies Thomas Bill was recognized as the new Senior Captain for the Station 3 Fire Station in Maxville.