A perfect season and a new EOSSAA record for ESC Plantagenet 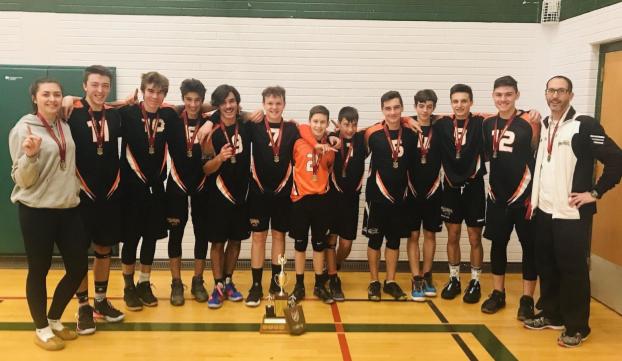 This year’s championship for high schools with less than 501 students was held at Rideau District High School in Elgin.  The EOSSAA territory goes as far as Deep River to the Northwest, Kingston to the Southwest, Cornwall to the Southeast and Hawkesbury to the Northeast.

As the 2019 Prescott-Russell Junior Boys High School Volleyball League champions and representative at EOSSAA, ESC Plantagenet played their first preliminary game against the Dragons of ESC Marie-Rivier (Kingston).  The Plantagenet Panthères easily won that game in two straight sets; 25-14 and 25-10.

As for their second preliminary game against Madawaska District High School’s Wolves (Barry’s Bay), the Plantagenet representative once again defeated their opponents (25-14 / 25-12).  That win guaranteed them a spot in the Eastern Region semi-final.

Plantagenet’s Junior Boys’ head coach, Dominic Belle-Isle, was really pleased with his athletes’ performance thus far in the championships since it was the team’s main goal to reach, and hopefully, win this year’s Eastern Ontario Final.

The 2019 EOSSAA Championship game was played on central court at Rideau DHS against St.Mary Catholic High School’s Crusaders from Brockville.  St.Mary also finished first in their respective pool but one of their first two games needed a decisive third set and Belle-Isle’s team also easily eliminated Perth DCI against which the Crusaders had a tough game.

The first set of that Eastern Region final was the toughest of the day but Plantagenet managed to win 25-23.  Leading the best 2 out 3 final, the Panthères came out very strong to start the second set and took an impressive lead of 9-1, an eight point lead they kept for the remainder of the championship to finally win 25-17.

Congratulations are deserved by the full team for its amazing and perfect 20-0 season!