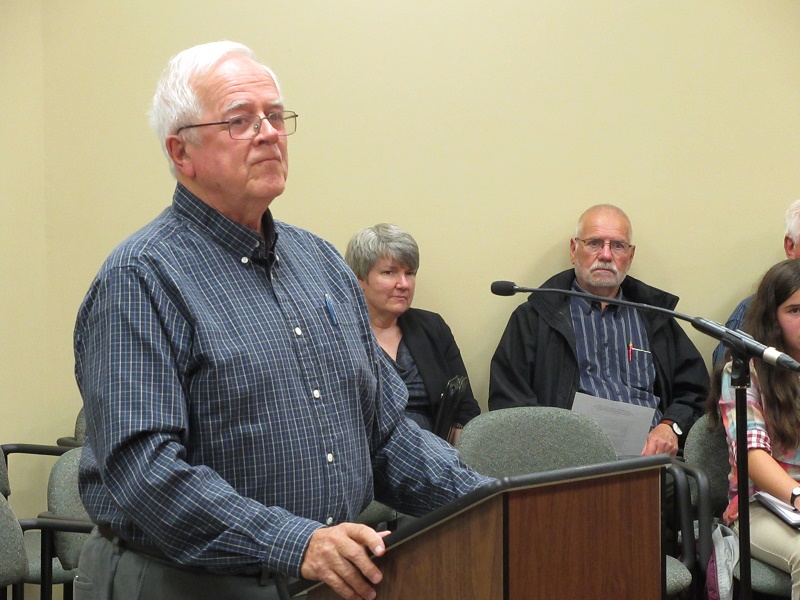 At the September 10 Champlain Township Council meeting, representatives of the Vankleek Hill Manor Non-Profit Housing Corporation asked for a letter of support from council and for the township to donate the former child care centre building and property for a new seniors recreation centre that would be located to additional, senior housing being proposed for land next to Vankleek Hill Manor.

Corporation Chair Gary Barton—who was mayor of Champlain until 2018, introduced Edward Power, a consultant who has worked on similar seniors housing projects. The non-profit housing corporation has hired Power to develop its plans.

Power explained that the 30-unit development would be located adjacent to the site of the former municipal childcare centre.  The three-storey structure would contain twenty 600-square-foot one-bedroom units, and 10 two-bedroom units of 800 square feet each.  Four units would be fully accessible.  Common areas would be barrier-free, all doorways would be wide enough to accommodate wheelchairs and other assistive devices, and the elevator would be large enough to accommodate stretchers.

In keeping with the mission of the project, 13 of the units would be given “affordable” designation, meaning their rental cost would be subsidized, while the remaining 17 would be rented at market value.

According to Power, the estimated cost is $6.8 million, which the corporation is hoping to finance through land equity and a mortgage from the Canada Mortgage and Housing Corporation (CMHC), a federal housing agency.  The interest rate would be 2.9 per cent over 50 years.  The corporation is in the process of securing so-called seed funding from CMHC and will then get the additional financing from the agency for construction.

Power said that they are hoping that the township will donate the former daycare centre property and building for use as a senior citizens recreation centre because it could improve the possibility of the CMHC allocating more funding for affordable units.

The proponents of the housing project believe a seniors recreation centre would be well-used by residents of Vankleek Hill Manor and the rest of the community.

Power said a partnership with the township and an endorsement by council would enhance the project’s likelihood of becoming reality.  The non-profit group wants the township to demonstrate it has confidence in the project, that there is a demonstrated need for affordable housing in the area, and that the proposal conforms with zoning laws.

Project organizers hope to have the financial arrangements completed by early 2020 and to have the building and site plan permits by spring of that year in order to have a general contractor hired before summer.  The goal is to have a weather-tight building on site before next winter with occupancy in the spring of 2021.

Barton also noted that people from outside Vankleek Hill and Prescott-Russell could live in the new facility.  “We do not control who gets in to the building,” he said.

Councillor Gérald Miner asked Power what Russell Township’s contribution was to a non-profit seniors housing project in that municipality. Power, who worked on that project, said Russell council reduced its development charges by half for the project.

“We’re going to think about this request,” said Mayor Normand Riopel.  Councillor Troy Carkner was absent from the meeting and the mayor said he wanted him to be able to participate in the discussion.