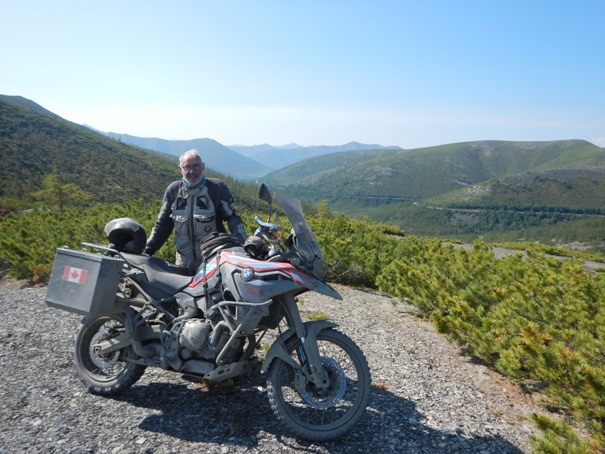 “I can’t understand why our bikes didn’t break in two.”

That was Gilles Robert’s reaction after completing the most grueling motorcycle trip he’s ever been on: a 6000-kilometre odyssey across eastern Russia.

Robert, 73, has lived in Grenville-sur-la-Rouge for 40 years, and is originally from Alexandria. After decades owning and operating a food distribution business, Robert decided to see as much of the world as he could.

Almost half of Robert’s Russian journey included the infamous “Road of Bones”, stretching across Russia’s far east, from Yakutsk to Magadan. The Road of Bones, officially called the Kolyma Highway, was built during the Soviet Union’s Stalinist era.

Much of the labour for the road’s construction, from 1932 to 1953, was provided by detainees of the notorious gulags (forced-labour camps.) Workers who died during construction were often buried in the roadbed, giving the road its name.

The Road of Bones is remote and rugged, carved through Russia’s eastern forests, mountains, and taiga. The road’s surface is sand, dust, and loose gravel, and it’s known as a punishing drive.

Despite the road’s ruggedness, Robert says they had few mechanical problems during the four-week trip.

“Just tires,” says Robert. “The tires we used are normally expected to last 15,000 kilometres, but on this trip they lasted no more than 3000.” 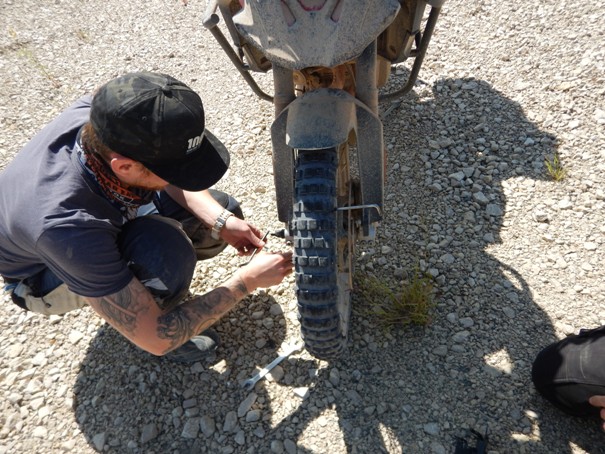 Tire changes were a regular occurrence during the trip. (photo submitted by Gilles Robert)

This was Robert’s second motorcycling journey through Russia. Two years ago, he rode from St Petersburg, in the west, crossed Siberia, and finished in Vladivostock, on the southeast coast.

This year, Robert started where he left off, in Vladivostock, in late June. As with the previous trip, Robert joined a small-group tour provided by Russian Moto Travel Company.

The tour company provided motorcycles, equipment, and arranged accommodation along the 6000-kilometre route. Robert’s group was headed by a lead guide, a tour operator, and a support vehicle operator. Besides Robert, there were two other tour group members, one from England and the other from Russia.

The journey from Vladivostock to Magadan was a first for everyone in the group, including the guides. At the trip’s end, the group’s lead guide, who has motorcycled all over the world, said he’d never done anything as arduous before. One group member gave up during the demanding ride. 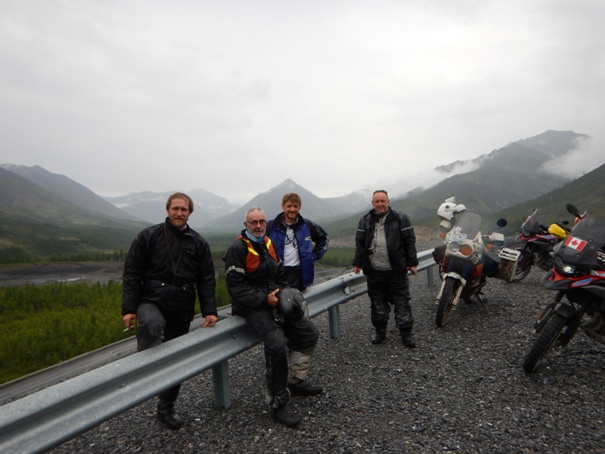 Robert, second from left, and the group take a break from the grueling ride. (photo submitted by Gilles Robert)

“If you haven’t done any enduro motorcycling,” says Robert, “this type of trip is not for you.” Robert, who has decades of motocross experience, trained for this trip. He says that at no point did he think he would have to give up.

“It was hard,” says Robert, “but I was really comfortable in the knowledge I could do it.”

“It’s like driving into a snow storm,” Robert says. “You’re not able to see anything at all.” When it rained the road became soupy with mud. Each day ended with bikes and riders caked with dirt.

During the trek, Robert’s group either camped beside rivers or stayed in the very basic accommodation available. City tours and visits to sites of interest were arranged all through the journey. Robert found visiting former gulags—which contributed much of the bones for the Road of Bones—sobering. 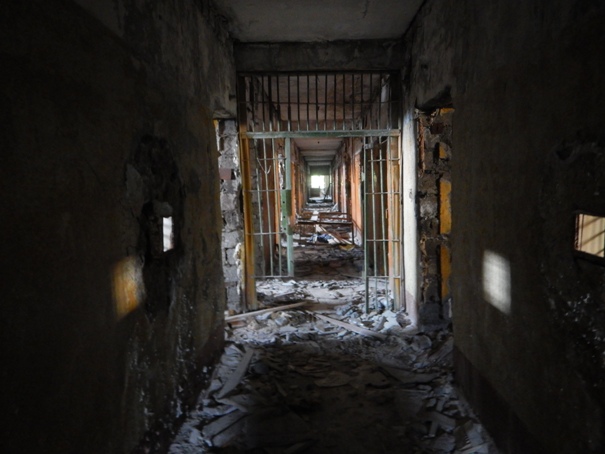 As with his earlier trip, Robert was impressed by Russia’s landscape and its people.

“The landscape is often similar to Canada,” Robert says. “Lots of trees, grass, remote spaces.” He was pleased at the welcome the Canadian flag mounted on his motorcycle prompted.

“People were so nice,” says Robert. “They’d see the flag and want to get a photo with us.” Robert says he has experienced the same reaction all over the world.

Robert has completed several motorcycle trips worldwide since he semi-retired from his business. In addition to his Russia travels, in the past five years he’s travelled across the United States, through Central America, and he’s done intensive tours in Southern America and Europe. He says the recent trip through Russia was the hardest, both physically and mentally.

Robert is already planning his next motorcycle adventure. In 2020, he’ll tour through Laos and Thailand.

“I’m fully retired as of last week,” says Robert. “Life has been good to me.” 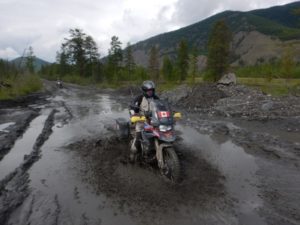 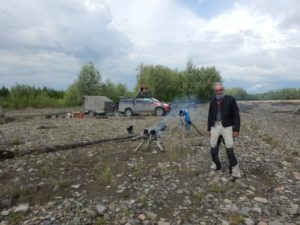 Accommodation along the route was either outdoors, or 0.1-star hotels. (photo submitted by Gilles Robert) 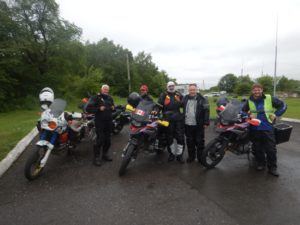 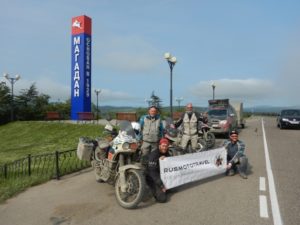 Robert, second from right, and the group celebrate their arrival in Magadan. Only five of the original six completed the whole journey. (photo submitted by Gilles Robert)