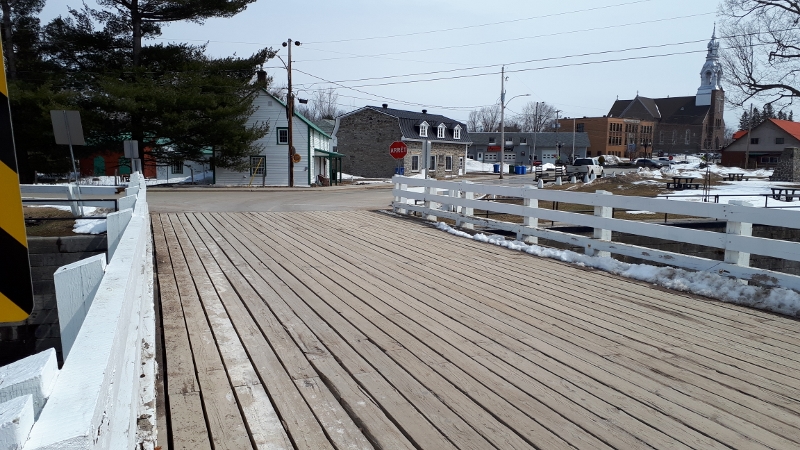 The MRC d’Argenteuil Council announces that it is obliged to abandon the project to build a bicycle bridge (arched bridge) over the historic canal in Grenville because of the high cost of the submissions for the project.

The bids received as part of the public call for tenders published from April 30 to May 31, 2019 far exceed the estimate and the overall budget of $ 1.1 million for this project. As a result, the MRC d’Argenteuil had to reject all the bids received.

The MRC d’Argenteuil saw in the arched bridge project the possibility of giving a particular and distinctive signature to the section of the VéloRoute d’Argenteuil (Green Road) located in the heart of the village of Grenville. The arched bridge would have been the third major work of the VéloRoute d’Argenteuil, after the suspended bridge at Saint-André-d’Argenteuil (linking Île-aux-Chats to Boisé Von Allmen), and the belvedere of the Carillon Generating Station, overlooking the Ottawa River at Brownsburg-Chatham (near Route 344 and Mount St-Philippe).

The Ministry of Municipal Affairs and Housing (MAMH) approved, in July 2018, $ 200,000 in financial assistance to support the project under the Regional Radiation Support Fund (RARF). ). The Department of Education and Advanced Education (MEES) had agreed to contribute $ 273,387 to the construction of the arch bridge. The MRC and the Village of Grenville will try, in the coming weeks, to reallocate the amounts received if it receives approval from MAMH.

The MRC had hoped to reduce the cost of the bridge by securing funding from community organizations.  The bridge over Rivière du Nord in Boisée Von Allmen received support from Caisses populaires Desjardins.

Meanwhile, efforts to restore the historic canal itself are moving slowly.

Sarah Lacasse-Dwyer, the President of Grenville’s municipal heritage commission, said a representative of Argenteuil-La Petite Nation MP Stéphane Lauzon told her the $3 million in federal funding promised for canal restoration is still available but it cannot be distributed until the Québec government finishes its assessment and makes its $2 million portion of the funding available.

That process, according to Lacasse-Dwyer, has been slow, first under the previous Liberal government and during the months since the Coalition Avenir Québec took office.

Lacasse-Dwyer has taken a personal interest in having the canal restored.  Earlier this year, she persuaded Parks Canada to have the historic plaque returned to the monument in the park next to the canal.  She has also started a petition to have the restoration work accelerated.  So far, it has gathered two-dozen signatures.  She is planning to put it online.  The paper version is available to sign at her office, located at 17 rue du Canal north in Grenville.

The Grenville Canal was constructed between 1818 and 1833.  It was designed to be a military and transportation route inland from the US border that could connect with the Rideau Canal in Ottawa.