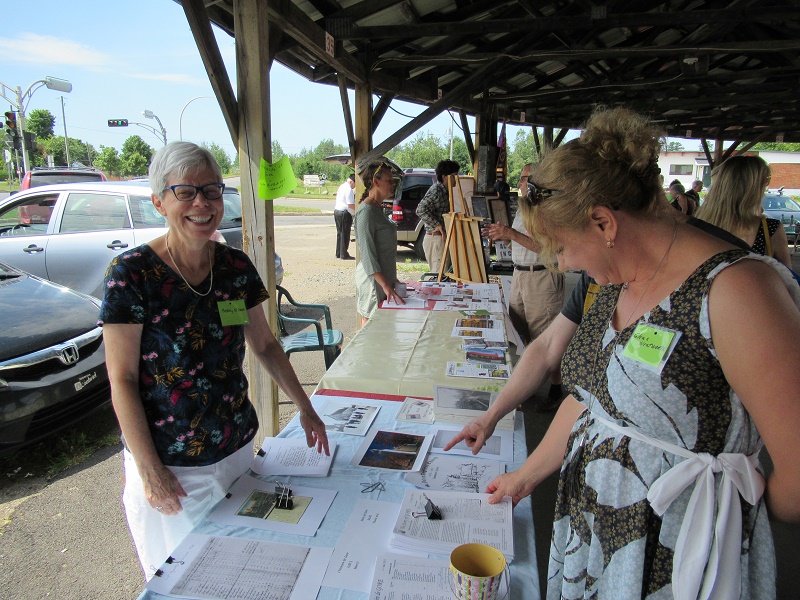 Left, Louise Johnston, who is writing a history book of Gore Township, talks with Lisa Maidens, formerly of Wentworth Township, at Argenteuil As We Remember

Argenteuil resident’s past and present reconnected with each other and their local history this past weekend.

Organizers had been working for more than a year on the event, which was meant to showcase local history and welcome  out-of-town residents back to the region.

The Argenteuil As We Remember reunion began on Friday with a social time at the Royal Canadian Legion in Brownsburg.

“We were amazed at the people who turned out,” said organizing committee’s Susan Kunhel-Barlow, who estimated at least 200 attended on Friday evening.

Due to the higher-than-expected turnout, organizers had replenish soft drinks and beer.

On Saturday, there were historical displays of the municipalities, community organizations, churches, and industries from throughout Argenteuil, along with entertainment at the flea market grounds in Lachute.  A community supper and dance took place that evening.  A breakfast was held on Sunday.

The historical displays focused on various local families and where they originally settled.  Churches, like the picturesque St. Mungo’s in Cushing were featured, along with significant sites in Canadian history such as the Grenville Canal.

A world map displayed where reunion attendees had traveled from.  Most were from eastern Canada, but several were from British Columbia, and one international visitor was from the Congo.

Kuhnel-Barlow said 21 local businesses and organizations sponsored the reunion, several of which donated door prizes.  The City of Lachute helped with the setup work, and Andrew Welden, owner of the flea market grounds, donated time and additional items, according to Kuhnel Barlow.