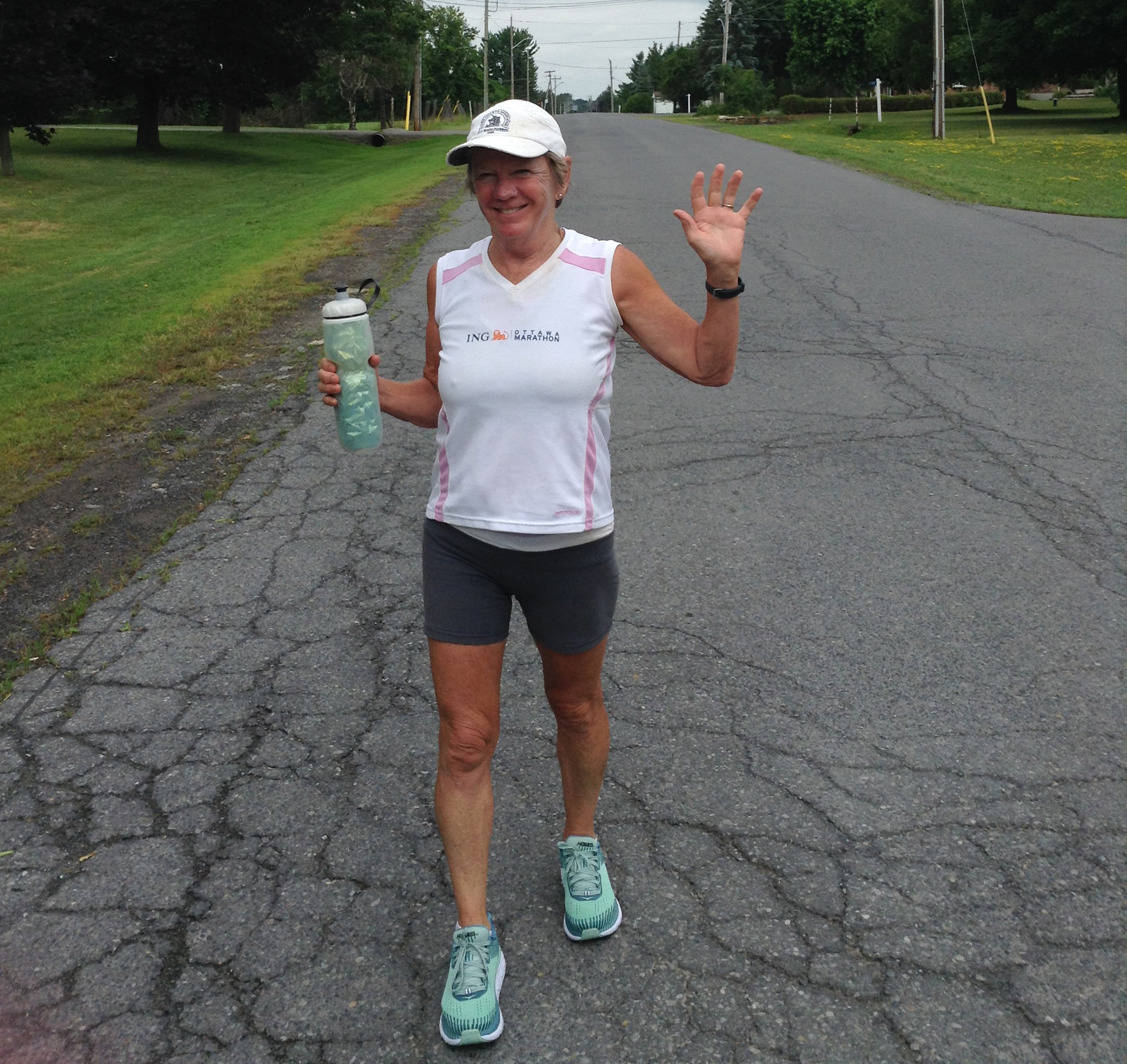 Cathy finishing up a daily run

It is difficult to describe exactly what drives Alexandria’s Cathy MacLean to run, and maybe this is the beauty of her story.  Nonchalantly, Cathy will say that she needs to run. This need sees Cathy achieve elite running results both within and outside the Glengarry community.  Her running accomplishments will be formally recognized during her induction into the Glengarry Sports Hall of Fame next month.

Cathy grew up on the family farm in Bainsville and is the daughter of the late Ambrose and Ann (nee O’Connor) MacLean.  Cathy recalls that after a work day of milking and chores, she would take the time to exercise on the family lawn.  It wasn’t until she was in her late 40s and after her family had grown up and left home, that she began to run consistently and participate in local road races. She completed her first marathon a month short of her 50th birthday. Cathy shares that she runs for the pleasure of the experience and feels very fortunate to have achieved the race results that she has.

Cathy has the innate ability to set attainable running goals and a rigorous training program for herself. Her story is organic in the sense that she devises and executes her own training program.  She enters the races of her choosing and executes a near perfect race strategy every time she competes.  In order to be successful and avoid injury, Cathy’s race plan is calculated to include important factors such as terrain and of course weather conditions that can change throughout a race.  She maps out her training program, her diet, her mental preparation and the important and costly logistics involved when she travels outside the community to compete.  Despite not being part of a large running community as is present in many urban areas, Cathy feels fortunate to be connected with some of the best competitive runners from the Alexandria area.  Great support and comradery exists with local runners, Jeff Lapierre, Jacob Cameron, Bruce MacGillivray, John Zowada and Glen Campbell.  Even though this group may not have completed a race or marathon altogether, emails and messages are often exchanged after a running event to offer congratulations and debrief about the course and running strategy.

Generally Cathy trains alone, as do many runners who need to juggle schedules and family commitments around their training demands. Six months prior to a marathon, Cathy will begin a specific training program.  She runs 10 km daily and gradually increases to marathon distance.  She tapers off her long distance and permits herself a 2 week recovery period prior to race day.  Cathy shares that these 2 weeks can be very stressful.  Even though her performances have proven otherwise, she can’t help but always wonder if her training and preparation have been sufficient.  Jokingly she admits that she is most stressed just prior to a race start.  So many things go through her mind but once on the course, her training and focus permit her to enjoy her races, take in the views and landscape, and look for supporters cheering her and others along.  Cathy executes a strategic race plan and evidence of this is the fact that she has completed every race and marathon within a finish time that she has predicted for herself.  When asked about how she has responded to injuries throughout her running career, Cathy says that she experienced some plantar fasciitis but has been most fortunate and escaped some common running induced ailments.  Locals can set their clocks by Cathy’s run schedule as she completes her year round training through the streets in Alexandria, on River Road and other surrounding rural roads.

Training for the top marathon events as Cathy does requires incredible self-discipline, perseverance and determination.  Glen Campbell, a local marathon competitor refers to Cathy as an old school runner.  Whether on her training runs or on the marathon course, Glen recognizes that Cathy is a really tough competitor and grinds it out whatever the weather and route conditions present.  Running races in her age group is most gruelling and to say that she has excelled is an understatement.  Glen also credits Cathy with helping him organize the Glengarry Cancer Run which successfully ran from 2000 to 2010 and raised over $140,000 for the Canadian Cancer Society.

Where does one start to chronical so many of Cathy’s remarkable running achievements?  Beginning in 2002, she completed her first Ottawa Race Weekend marathon recording a finish time of 4:03:21.  Again in Ottawa at the 2007 marathon, she ran and achieved her personal best time ever of 3:48:02 in the 50 to 54 age category. Cathy has raced and finished the Ottawa marathon 10 times.  In three of these marathons, she finished first in her 60 to 64 age grouping.  Later years saw her place 2nd three times in the 65 to 69 age grouping.

Cathy ran in the Toronto Waterfront Marathon in 2005 and her result served as a qualifying time to run Boston in 2006.  Since, she has completed the Boston Marathon 10 times and has qualified once again to compete in April 2020.  The Boston Marathon of 2016 was most special for a couple of reasons. Her son Daryl also qualified and together they ran while Cathy’s daughter, Rebecca, was able to travel from North Bay and be present to cheer them on. The Boston Marathon is indeed a favourite of Cathy’s as the course generally remains the same but the unpredictable weather can play havoc with results.  Cathy was only 500 meters from the finish in 2013 when race officials halted the runners due to the bombings at the finish line.  That particular experience haunted Cathy for a long time but did not deter her from competing in Boston in subsequent years   Cathy qualified and ran in the New York City Marathon in November of 2018.  This was another incredible opportunity and she truly loved racing through the boroughs and finishing the last few miles in Central Park. Again her son Darryl travelled and completed this marathon with her. On this day, Cathy finished 28th of 172 runners in her age group, and was second amongst the Canadian runners.

Woven throughout the 20 plus marathon races, Cathy has completed over 20 half marathons and too many to count 5 and 10 k races.  Since 2011, Cathy has been a regular participant at the Canada Army Run events held in Ottawa in September, generally running the half marathon event. The army run is an emotional event for Cathy as she races alongside many veterans, some in wheelchairs, and some with prosthetics. In 2017, she finished first in her age group when she completed the special 100 Year Vimy Anniversary Challenge event.

As an aside from her running accomplishments, for the past 5 years Cathy has participated in the Glengarry Sports Hall of Fame Polar Bear Dip fundraiser event.  She has great fun participating and thanks her friends and family in the community for generously sponsoring her for the initiative.  Since Cathy has retired as manager at the LCBO, she now volunteers with the Summerstown Friends of the Trails. She enjoys taking school groups out on snowshoes through the trails and remarks that it is so nice to see kids doing something that they may never have an opportunity to do otherwise. Cathy will continue to run and adds that perhaps in the future she would like to train for a triathlon event.

Cathy’s running achievements are truly remarkable.  Her athletic ability speaks for itself, but it is her humility and unassuming character that are equally as endearing. Cathy takes in stride her running accomplishments, and feels blessed to have the unwavering support from her husband, her children Rebecca, Daryl and Kyra, and community friends. Cathy is one of those athletes who admirably doesn’t know how good she is.  She doesn’t run for the prize; she runs because, as she quietly says, “I need to. It’s what I do.”  Cathy is one of five inductees to be celebrated at the Glengarry Sports Hall of Fame Induction Dinner to take place at the Char-Lan Recreation Center in Williamstown on August 21.