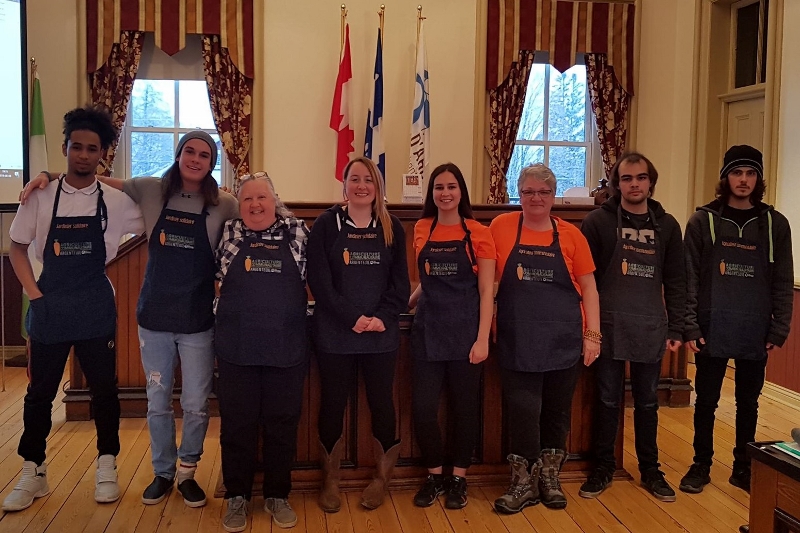 The project’s team, composed of a mix of veterans and recruits, invites citizens, organizations and businesses to get involved with the agricultural and social experience.

Project Coordinator Renée-Claude Bergeron, along with Émilie Jutras, Olivier Brunette, Cristian Cabrera Diaz, Hélène Poudrier, Audrey Bigras-Desaulniers, Justin Lépine and Jérémie Lépine are growing 30 varieties of fruits and vegetables on land the project uses in Brownsburg-Chatham.  The fresh produce harvested by the project will be used to improve the food supply of nearly 2,000 citizens of Argenteuil in partnership with the Centre d’Entraide d’Argenteuil.

In addition to growing and harvesting, the team in place will reinforce the social aspect of the project, and welcomes those who wish to take part and want to learn more about food security.

“The team in place is dynamic and dedicated and will make every effort to ensure that every participant finds their place, regardless of age the physical condition, or the frequency of their involvement,” said MRC d’Argenteuil Prefect Scott Pearce.

The Community Agriculture Project evolves each year under the MRC’s sustainable development approach that allows it to optimize its techniques, infrastructure and social objectives.

For 2019, a community composting demonstration area and the garden of flavors has been added to the project.  The garden is being developed in cooperation with Bizouneux of the Carrefour Jeunesse-Emploi d’Argenteuil. Young people will be busy building twenty or so fine herb pans for the project.

In order to encourage and measure community involvement, the MRC has set a target of 1,000 hours of having citizens participate with helping with the project.  The number of hours will be displayed on a large carrot-shaped board.

The land the MRC d’Argenteuil Community Agriculture Project is located on was acquired in 2013.  Since the first production season in 2015, it has grown more than 70 tonnes of fruit and vegetables, and benefitted 500 families in the region.  The project operates within the MRC’s Plan de développement de la zone agricole (PDZA), and is part of the MRC`s objective of identifying innovative approaches to food security in a multifunctional approach to agriculture.

The project has also been rewarded with three awards and mentions nationwide; The Carrefour Action Municipale et Famille in 2016, Réseau québecois des villes et villages en santé in 2016, and the Fédération québecoise des municipalities in 2015.

Anyone interested in volunteering with the MRC d’Argenteuil Community Agriculture Program must pre- pre-register by phone at 450 562-2474, ext. 2361 or by email at [email protected]