Water levels expected to peak Thursday of this week 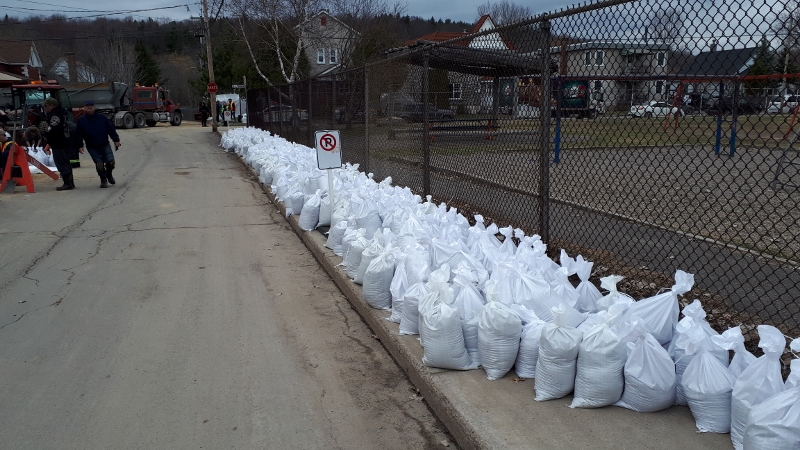 Sandbags ready to be used for flood control in Lachute. Photo: James Morgan

Flooding in Ontario and Quebec was on everyone’s minds this past weekend and many people turned out to assist with sandbagging, to bring  food to volunteers; others took displaced residents into their homes as conditions worsened across the region.

Water levels along the Ottawa River are expected to peak on Thursday or Friday of this week. A significant rainfall was in the forecast for Wednesday, May 1.

Likewise, for residents suffering from floods as a result of the Rivière du Nord overflowing its banks, water levels are expected to recede, but authorities are warning that it is not rare for a second wave of spring run-off to push levels higher again.

According to the Ottawa River Regulation Planning Board on April 30, water levels are increasing along the lower Ottawa River due to arriving significant spring runoff from the west-central part of the basin. Combined with forecast precipitation, levels are expected to peak on Thursday or Friday. Levels should remain fairly high and stable thereafter depending on weather conditions. Reservoirs in the northern part of the watershed, which are being used to store runoff and minimize flooding downstream, are rapidly filling.

During the weekend, Champlain Township warned residents along the Ottawa River to stay alert, pack their bags and be prepared to evacuate, but noted that township personnel were keeping a close eye on water levels along the shoreline.

For a time on April 27, County Road 17 was closed briefly to ensure the safety of volunteers and residents working on Voisine Road in Clarence-Rockland. Members of the Canadian Armed Forces were there to assist with filling sandbags and assist the municipality.

Bell Falls dam was at risk of failure, but still holding on Tuesday

Further north, downstream of the Bell Falls dam, residents were evacuated by helicopter Thursday evening and into Friday morning and at press time, residents were not yet permitted to return to their homes (see story elsewhere in this issue).

Although no evacuations have occurred as yet in Champlain Township, the mayor says staff is ready to deal with emergencies or evacuations.

Non-emergency boats are now banned from the Ottawa River between Ottawa and the Carillon dam; an order was issued by the Minister of Transportation, Marc Garneau. Boaters in contravention of this restriction could face fines of up to 5,000.

Drones are not permitted to fly within nine kilometres of flooded areas of Quebec. Further restrictions may be introduced as needed.

A temporary dam was created on a street in Lachute over the weekend, and sandbagging efforts continued. Ottawa River water infiltrated a barrier set up around the Argenteuil Museum in Carillon. Members of the Canadian Armed Forces have also been assisting in Saint-André-d’Argenteuil during the past days, as flood waters have forced the evacuation of about 50 residences there.

An emergency shelter is still in place at the Kevin Lowe-Pierre Pagé Arena at 80 Hamford Avenue in Lachute, where accommodations, rest, showers, food and psychosocial support is available.

Across the region, residents are being told to leave sandbags in place and are reminded that when the time comes for clean-up, municipalities will be issuing instructions and offering assistance for clean-up of debris and advice, help or support for dealing with sandbags and their contents.

École secondaire catholique de Plantagenet is offering the use of its showers to Alfred-Plantagenet flood victims.

The Town of Hawkesbury is offering the use of the sports complex shower facilities to flood victims. There is also wi-fi available and people can charge devices there. The complex is open from 6 a.m. to 10 p.m.

Authorities note that the flood situation, along with water levels and precipitation forecasts, can change in an instant.

Well water in a flooded area may not be safe for consumption; free water testing is available from the Eastern Ontario Health Unit.

Municipalities are directing people to their websites and social media for updates.

The Review is posting frequent updates and sharing press releases and municipal statements as soon as they are received.

Updated stories and social media posts are published throughout the weekdays and evenings and during weekends.