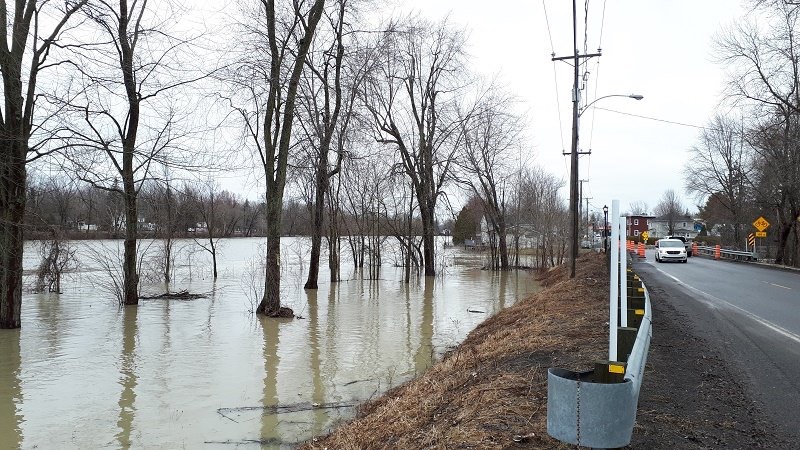 About 50 residents have left their homes due to flooding, according to Saint-André-d’Argenteuil authorities. The mayor declared a state of emergency there yesterday evening, when heavy rainfall caused a rapid rise of water levels, threatening residents and homes in the village. The municipality says that even if the rain lets up, water will continue to rise, possibly into Monday. Residents in affected areas should evacuate their homes, stressed the municipality in a press release issued late Saturday afternoon.

Residents can expect water levels to rise tonight, Sunday and Monday and possibly later in the week.

Residents who evacuate their homes are asked to notify the municipality. For security reasons related to the rapidity of the rising water level, the municipality will offer boat transportation only for emergency response. The victims are being directed to an emergency shelter, located at the Kevin-Lowe / Pierre-Pagé Regional Arena, 80 Hamford Street, Lachute, where food, showers and beds are made available. The Red Cross is on site to receive the victims and psychosocial services CISSS Laurentians are also there to provide support.

As of today, flood victims are able to obtain drinking water thanks to a system set up at the City Hall, located at 10, rue de la Mairie. The municipality is asking citizens to bring their own containers and make responsible use of the bottled water available to allow better distribution among all the victims.

Sand bags are available at the municipal garage located at 72 Wales Street. Volunteers are also still needed for the rest of the day and this evening.

The flood areas of Robillard Terrace, Baie and Fournier Street are the worst affected. Municipal infrastructure such as bridges, sewers and highways are currently under surveillance but are safe. The municipality estimates that 50 citizens have been evacuated.

The municipality thanks local business owners for their generosity towards the victims. Businesses have agreed to remain open during the Easter holiday to accommodate citizens and facilitate the coordination of emergency measures.