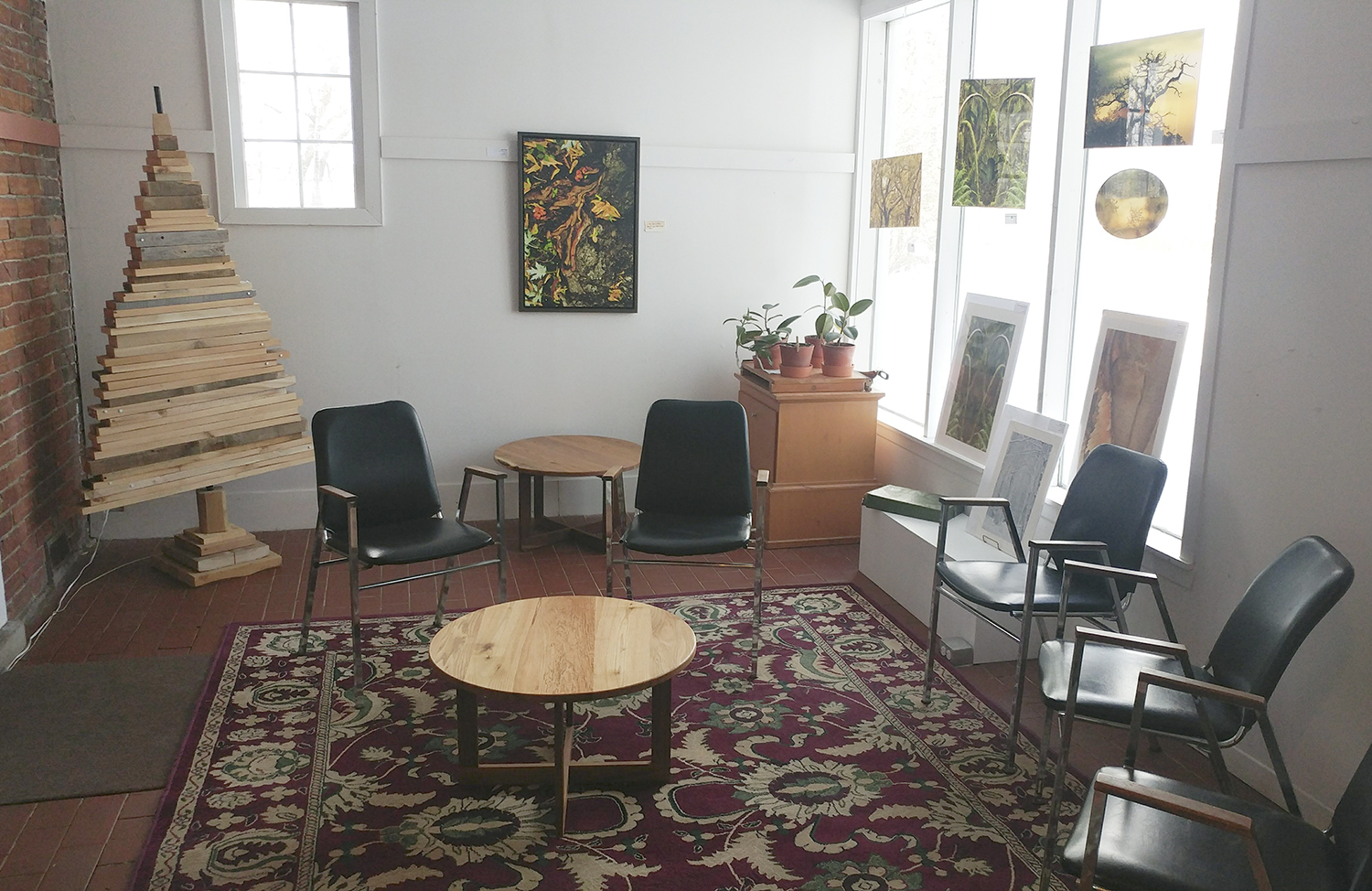 The Sun Room Gallery is a new space, available to gallery-goers. Located adjacent to the kitchen, coffee will be on offer more often at Arbor Gallery Cultural Centre.

Many people in Vankleek Hill are familiar with Arbor Gallery which has been a part of this community for several decades.  It was originally created by Phil Arber and group of dedicated artists who very quickly recognized its potential.  Arbor Gallery was a vibrant place in those early days, especially for these young artists, many of whom were still new to Vankleek Hill.  In time, Phil passed the torch to Jessica Sarrazin and Mark Greenwald who created a board and guided the ship for the next eight years, giving it new life as Arbor Gallery-Centre for Contemporary Art. When Jessica retired from her position as curator, the vision of the gallery began to change once again. It became a non-profit charitable organization, expanded its mandate, and took on a new name and an expanded mission as Arbor Gallery Cultural Centre.

This past January and February, motivated by a friend of the gallery, two board members took on the challenge of renovating the kitchen and former office of Phil Arber. Anyone who’s been in the gallery over the past five years would know that this was no small challenge. Samme Putzel and her crew helped by removing many items no longer of use to the gallery.  Then the hard work of sifting, sorting, pitching, cleaning, plastering, and painting began in earnest. Volunteers donated their talent and energy and the result is nothing less than fabulous, says Arbor Gallery Cultural Centre board member Mark Greenwald.  In addition to gaining a beautiful and functional kitchen, the newly named Sun Room Gallery, and a brand new website, the gallery has also hired two young vibrant people, one as  the new coordinator, the other as the gift shop manager.

Now it’s time to show off these spaces which are just waiting for the community to use in new and creative ways. On Sunday, April 7, from 2 to 4 p.m. the gallery is hosting the Re-Visioning Arbor Gallery Cultural Centre celebration. Artists of all genres, gallery volunteers, and community supporters of the gallery are all welcome. There will be a short piano performance, followed by a thank-you to all of the people who helped with the renovations, an introduction to the new coordinator and gift shop manager, refreshments, wine, and an opportunity to donate to the gallery in exchange for some remarkable historical treasures that were unearthed in the deep clean-up. The gallery board looks forward to welcoming new people and sharing this special moment with all who have been involved with the gallery since its inception. You can join the celebration on Sunday, April 7 at 2 p.m. at 36 Home Avenue and discover, or help shape the future of Arbor Gallery Cultural Centre.

This fireplace is now on view in the kitchen at Arbor Gallery Cultural Centre, thanks to a major clean-up and de-cluttering which took place recently.